Accessibility links
Have Sex To Stay One Evolutionary Step Ahead Scientists say sex has been a mystery because it doesn't make much sense, from a biological perspective. A new study provides the first direct evidence that sexual reproduction improves a species' ability to survive in a fast-changing environment. 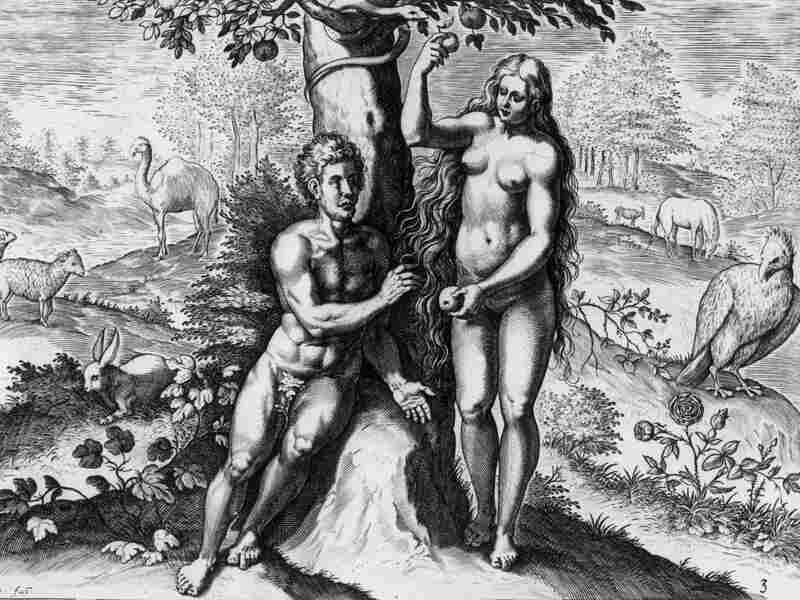 Eve offers Adam the fruit in the garden of Eden in Theatrum Biblicum, a drawing by Johann Fischen (circa 1650). Sex lets a species evolve faster to rapidly adapt to a new environment, researchers say. Hulton Archive/Getty Images hide caption

Scientists have finally demonstrated that sex is useful.

A team from Indiana University found that worms that have sex were better able than asexual worms to stay one evolutionary step ahead of dangerous parasites.

The finding, published in the journal Science, provides the first direct evidence that sexual reproduction improves a species' ability to survive in a fast-changing environment. And it suggests that parasites, including bacteria and viruses, are one reason species developed sexual reproduction in the first place.

The results explain "one of the long-standing mysteries in evolutionary biology, one that we've been banging our heads against for 30 years," says Michael Brockhurst from the University of Liverpool in the U.K.

Brockhurst says previous studies found plenty of circumstantial evidence that sexual reproduction provided an evolutionary edge. But he says this is the first experiment showing the process at work in a lab animal.

Scientists say sex has been a mystery because it doesn't make much sense, from a biological perspective.

For one thing, this approach to reproduction requires males, which consume resources even though they may not contribute much beyond their DNA, says Levi Morran of Indiana University, the new study's lead author.

Imagine you're a mom who wants a lot of grandchildren, he says.

"If you were able to produce daughters that didn't need a male to reproduce, you could actually produce more grandchildren than another mother who wasted her time and resources producing males that can't directly bear offspring," Morran says.

So why, then, are there so many species that have sex?

One common explanation dates back to the 1970s, when biologists came up with something called the Red Queen hypothesis, after the Red Queen in Lewis Carroll's Through the Looking-Glass.

A 30-Million-Year-Old Virgin's Secret To Success

And that's where sex comes in, Morran says. It lets a species evolve faster to rapidly adapt to a new environment, or a new threat.

Sex does this because it lets a species mix and match from two different sets of genes, one from each parent. Without sex, reproduction is a lot like cloning, where each generation is essentially a copy of the previous one.

Most scientists accept the Red Queen hypothesis. But Morran and his team wanted to demonstrate it in the lab. And he also wanted to show why it's so important to adapt quickly.

So he did an experiment with worms, which can reproduce sexually or asexually. The research team exposed the worms to a bacterial parasite that can do bad things to them.

"As gross as it sounds, it actually digests the host from the inside out," Morran says. "So it's a pretty nasty pathogen."

This parasite is constantly evolving in ways that help it infect its worm host, Moran says. "And then you have the host evolving on the other side of the equation trying to evade the parasite," he says.

As part of the experiment, the team used genetic engineering to create a group of worms that could only reproduce through self-fertilization.

When we allowed a parasite to co-evolve with them, they rapidly went extinct," Morran says.

Then the team tried the same thing with another group of worms that could only reproduce by having sex.

"Even though their bacterial parasites became more infective," Morran says, "those sexual populations were able to adapt and become better at evading their parasites."

Finally, the scientists looked at worms in their natural state, which can choose to reproduce sexually or asexually. They found was that the worms responded to an evolving parasite by adding lots of males to their population and having a lot more sex.

And that kept the worms one evolutionary step ahead of the parasite.