Accessibility links
'Torchwood' And 'Curb': Two Summer TV Treats A new version of the British sci-fi series and a new season of the Larry David comedy begin this weekend on Starz and HBO, respectively. TV critic David Bianculli says while the broadcast networks are taking it easy, these competitors are serving up excellent, unusual television. 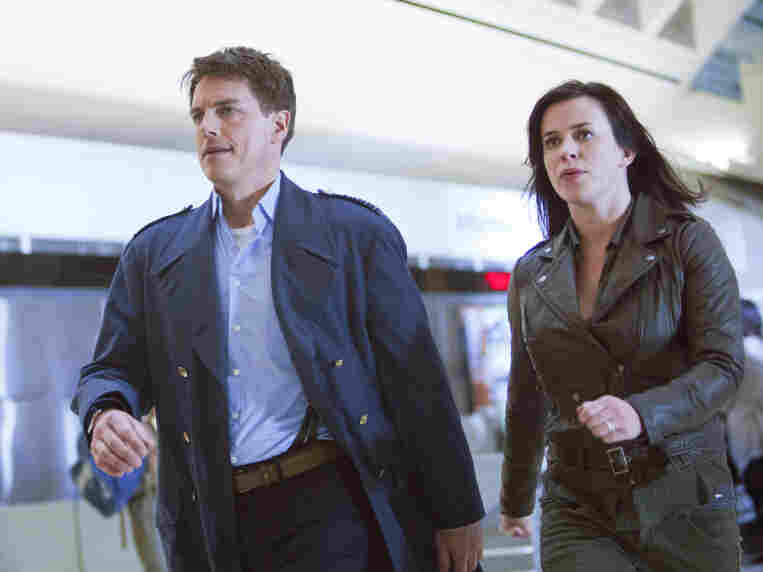 John Barrowman and Eye Myles have moved to America in the latest season of Torchwood — but that's not the only thing that's changed. The duo are now at the center of a worldwide mystery: No one on Earth is dying. Adam Taylor/Starz Original hide caption 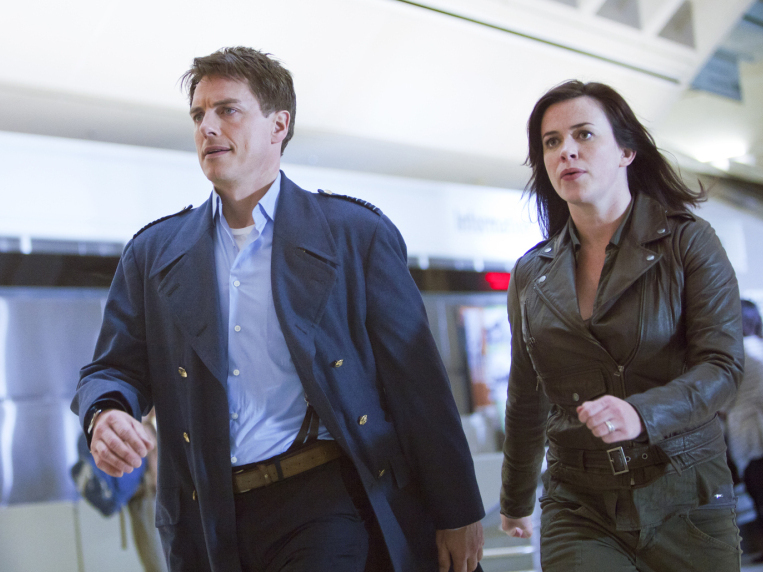 John Barrowman and Eye Myles have moved to America in the latest season of Torchwood — but that's not the only thing that's changed. The duo are now at the center of a worldwide mystery: No one on Earth is dying.

This month, while the broadcast networks are taking it easy, some competitors are serving up a lot of excellent, unusual television. The action starts this weekend with a new version of the British sci-fi series Torchwood and the Larry David comedy Curb Your Enthusiasm.

Torchwood is a show that may not even be on many people's radar. It's a British show, which ran for three seasons and was imported and shown here by BBC America. It's a sci-fi show about a sort of overseas X-Files unit, run by a cocky hero who is not only irreverent, and American, but immortal. And a time traveler. And bisexual.

It's a spinoff character, and series, from Doctor Who, the long-running British fantasy show that is still around — and has been around so long, it launched the year John F. Kennedy was assassinated. It started as a kids show, but in the hands of writer-producer Russell T. Davies, Doctor Who became more for adults — and Davies also is the man behind Torchwood.

So if you're sneering at the idea of sci-fi and fantasy, you shouldn't — not if it's in the right hands. In the past, I've had to try to persuade people to watch Buffy the Vampire Slayer and Lost and Battlestar Galactica and The Walking Dead as genre shows that had something to say and said it cleverly. And the same goes for Torchwood, which begins its new incarnation Friday evening at 10 p.m. ET on the Starz cable network.

In this new version, John Barrowman remains in place as the star of Torchwood, and he soon meets up with one of his most feisty and dependable team members, Gwen Cooper, played by Eve Myles. But the rest of the Torchwood team died at the end of last season — so for this year, the survivors come out of hiding and move to America, the center of a new global threat that sounds harmless but is just the opposite. All of a sudden, all across the planet, people stop dying — starting with death-row prisoner Oswald Danes, played by Bill Pullman, who survives his own execution. In a montage of channel-surfing that's disturbingly credible, the media instantly come up with a catchy name for this inexplicable new phenomenon: miracle day.

Barrowman, as Jack Harkness, is an old-school swashbuckler with new-school sass – kind of like a bisexual Bruce Willis.

As usual, the media are missing the real story. When no one dies, what does that do to population growth? To the spread of infectious but now nonlethal diseases? To war and terrorism and thrill-seeking and so many other things? Torchwood — the task force and the TV series — takes all of this very, very seriously, and doesn't presume it's some sort of natural phenomenon. So if someone engineered this so-called "miracle," the big questions soon become: Who? And why?

The acting, as well as the writing, is really strong here. Barrowman, as Jack Harkness, is an old-school swashbuckler with new-school sass — kind of like a bisexual Bruce Willis. Bill Pullman, who usually plays the likable hero in films like Independence Day, portrays a creepy, odious, pedophile murderer here — yet one who, thanks to the media, finds both a voice and a mission. And Lauren Ambrose, who was so wonderful in Six Feet Under as teenager Claire Fisher, gets a meaty adult role here, as an opportunistic agent who offers to represent the executed, but not dead, killer.

I've previewed the first three episodes of Torchwood, and they left me hanging and eager to see more. So give it a chance, please. And if you want to catch up, BBC Home Video is releasing the entire three-season British version of Torchwood on DVD and Blu-Ray July 19. 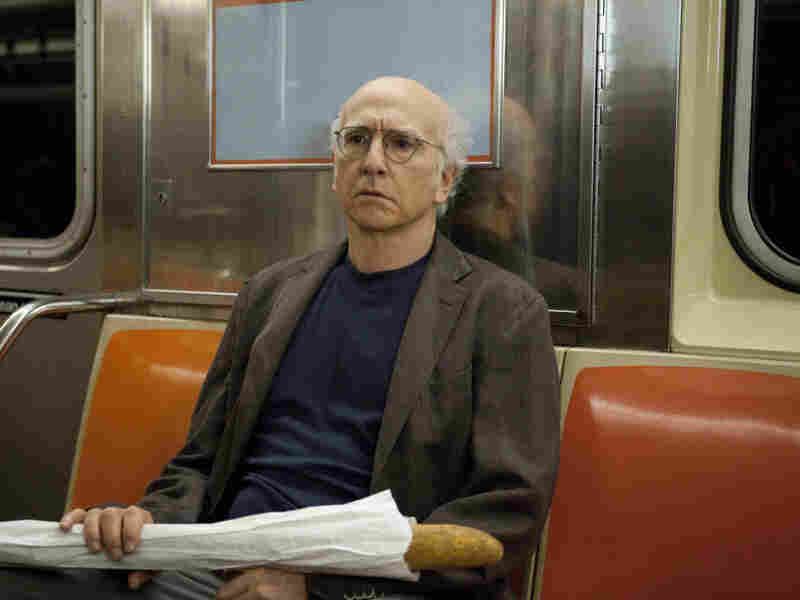 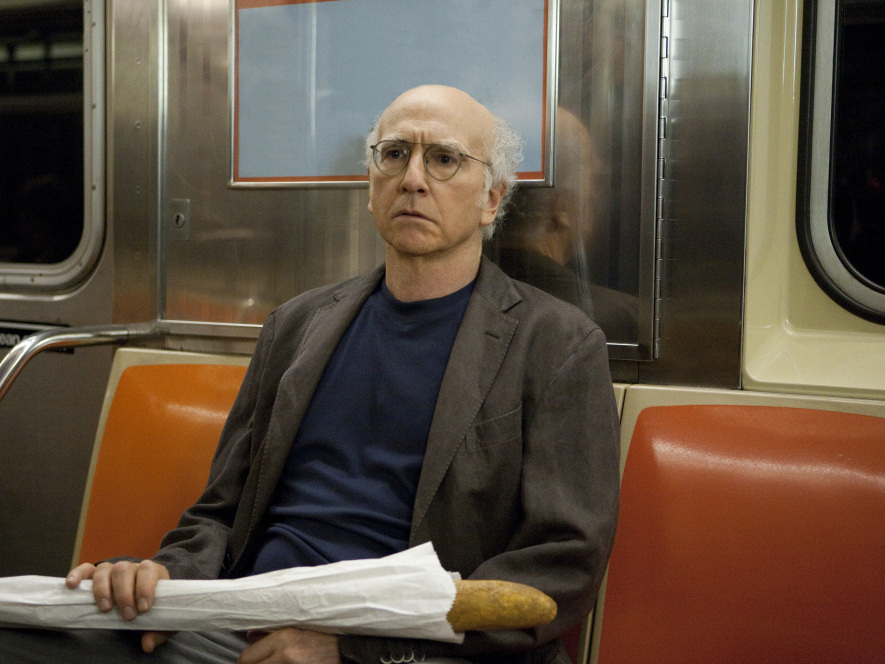 Larry David returns for an eighth season of Curb Your Enthusiasm. New episodes will air starting Sunday at 10 p.m. on HBO.

And now for something completely different. On Sunday, HBO presents the eighth-season premiere of Larry David's Curb Your Enthusiasm, one of the funniest and daringly different shows ever made for TV. It's been a long time since we've seen the exaggerated TV version of Larry David in action — the last time was in November 2009, when he taped the Seinfeld reunion show and lost his chance to reconnect successfully with his estranged wife Cheryl, played by Cheryl Hines.

The new season begins with an episode called "The Divorce," echoing the comedian's real-life divorce from his wife, Laurie, four years ago. But I haven't seen that episode. HBO and Larry David are holding their cards close to the vest, and instead have sent out three random, nonsequential episodes from the new season.

It's been a long time since we've seen the exaggerated TV version of Larry David in action.

The story arc this season takes Larry to New York, and one of the three episodes I've seen explains why — but I won't spoil it. It's enough to say that if you missed Larry David as the self-appointed policeman of all things that irritate him — one of the new episodes calls him "a social assassin" — get ready for a lot more moments of outrage ... and a few that may make you uncomfortable.

Even if you agree with Larry David's TV alter ego on principle, he always ends up going too far. For me, his Curb Your Enthusiasm character ranks up there with John Cleese's Basil Fawlty in Fawlty Towers. They're both guys whose ability to embarrass themselves while persisting in venting their outrage against the world ranks them among television's most original and entertaining comedy characters.