Accessibility links
Syria's Best-Known Dissident Reflects On Uprising Michel Kilo has spent decades criticizing what he calls a military dictatorship run by one family. He even spent time in jail. Now, a younger generation has sparked a civil rebellion in Syria. "What the youth have managed to do is really enormous," he says. 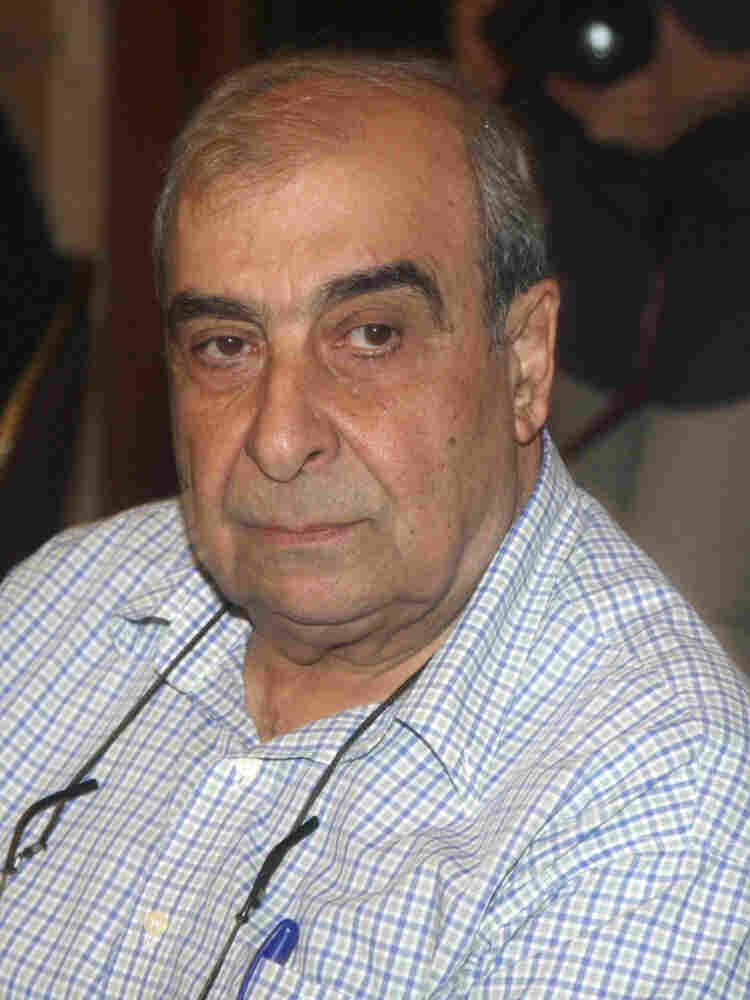 Michel Kilo's book-lined apartment in a Christian neighborhood in Damascus is a quiet contrast to streets where protesters demand an end to Syria's repressive regime.

But Kilo has never been silent, despite years in jail for directly criticizing what he calls a military dictatorship run by one family. At 71, Syria's best-known dissident watches the protest movement that has thrown the country into turmoil and reflects on the failures of his own generation.

Kilo describes himself as the spiritual father of Syria's young dissents and their challenge to the rule of President Bashar al-Assad.

"They are better, much better," he says, comparing the emerging young leaders to his generation of critics. "They have organized the street and they are fighting for the street."

Kilo entered politics in the 1950s, a communist at a time when Syria was allied with the Soviet Union. He was jailed briefly for urging radical reforms in a speech to Baath party members, already the dominant party in Syria.

"For us, it was important to be a revolutionary," he says about his own political journey, so different from a generation learning politics in the Arab Spring. "For them, it is the citizen. These young people are less ideological and they have a bigger vision about society and freedom."

He's watched the movement grow more confident over the past four months. There are committees to document the protest and verify the names of their dead, underground clinics to treat the wounded. Emerging young leaders discuss concepts such as freedom and civic responsibility in Internet chat rooms late at night.

"They understand citizenship," he says — a concept that is hardly practiced in a country with one-party rule and a million-member security service.

The uprising has presented the greatest challenge to Assad in Hama, a city crushed by his father a generation ago and now slipping out of government control. Security forces withdrew from Hama a month ago after clashes with protesters that left more than 60 dead.

"It is dangerous," Kilo says, because the protests there are now the largest in the country.

"Hama proved that the people are unarmed and they are against the regime. It is a peaceful protest," he says. Hama has contradicted the government's claim that armed Islamists are responsible for the violence.

This week, the government has returned to Hama in force, even as Assad has invited opposition figures, including Kilo, to participate in a national dialogue on July 10 to find a way out of the crisis. The regime wants talks but is not offering to end the violence first, and Kilo has turned down the invitation.

"Not the opposition. We shall not speak with the government," he says.

Long banned from speaking out, Kilo was heard by the Syrian people for the first time last week in a government-sanctioned opposition meeting. Syrian state television broadcast the event. Kilo sent out tweets outlining his recommendations, saying the government must:
-Recognize political parties.
-Allow the opposition to publish a newspaper as a trust-building measure.
-First, send the army back to base.

"They are sending troops to places where we never imagined they would send troops," says Kilo.

His participation in the opposition conference drew criticism on Facebook sites. Protest organizers said the meeting was a mistake. It gave credibility to the regime. But Kilo says the protest movement makes mistakes, too.

"I think they make a big mistake when they believe that some words are sacred — for example, 'the people' or 'the street.' They do not represent the whole street."

Kilo lives in Damascus, where support for Assad is real, but even in the capital the demand for change, for reform, for a new system of governance, is strong. The protest movement opened that debate and there is no going back, he says.

So, is this gentle criticism from an older critic to a new generation?

Kilo's jowly face breaks into a wide smile, his thick eyebrows move up his face and he laughs. "I am telling you, I am old, but mentally, I am very young. What the youth have managed to do is enormous. They have the right to criticize all of us."

Kilo's criticism is focused on a regime that he says still does not believe in reforms, but can no longer suppress a whole country.