Accessibility links
Cameron Vows Full Probe Of Hacking Scandal The British prime minister said inquiries would look into the crimes, as well as the general practices of the newspaper industry. At a news conference Friday, he also blamed politicians for their cozy relationship with the media. His statements came as his former media aide, a former News of the World editor, was arrested. 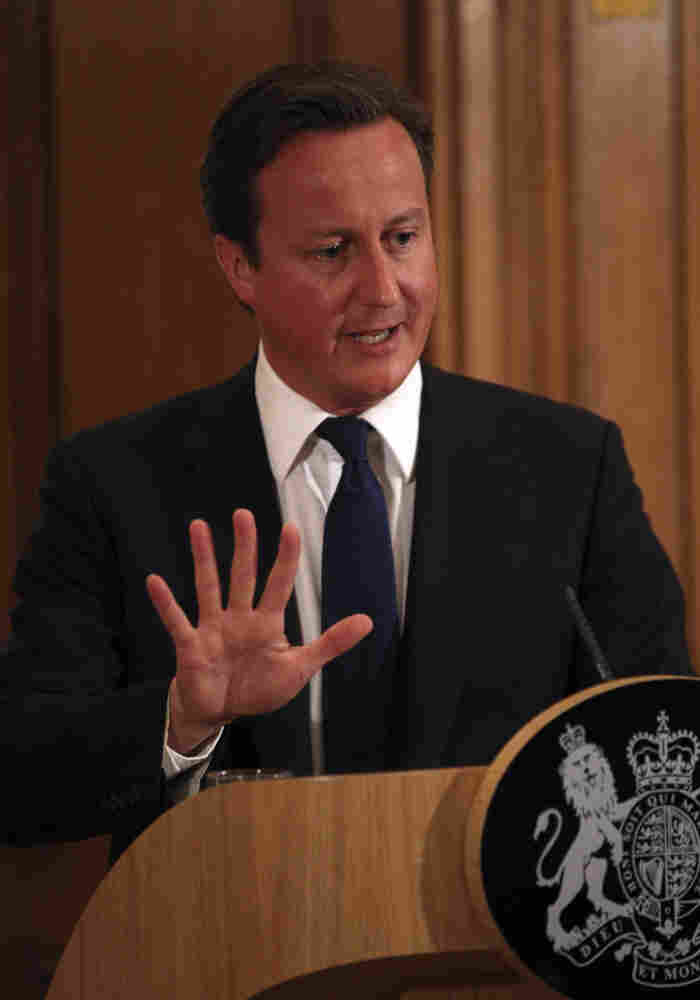 Britain's Prime Minister David Cameron promises a full investigation into the phone hacking and police bribery scandal that led to the collapse of the News of the World tabloid, at a press conference in London on Friday. Peter Macdiarmid/AP hide caption 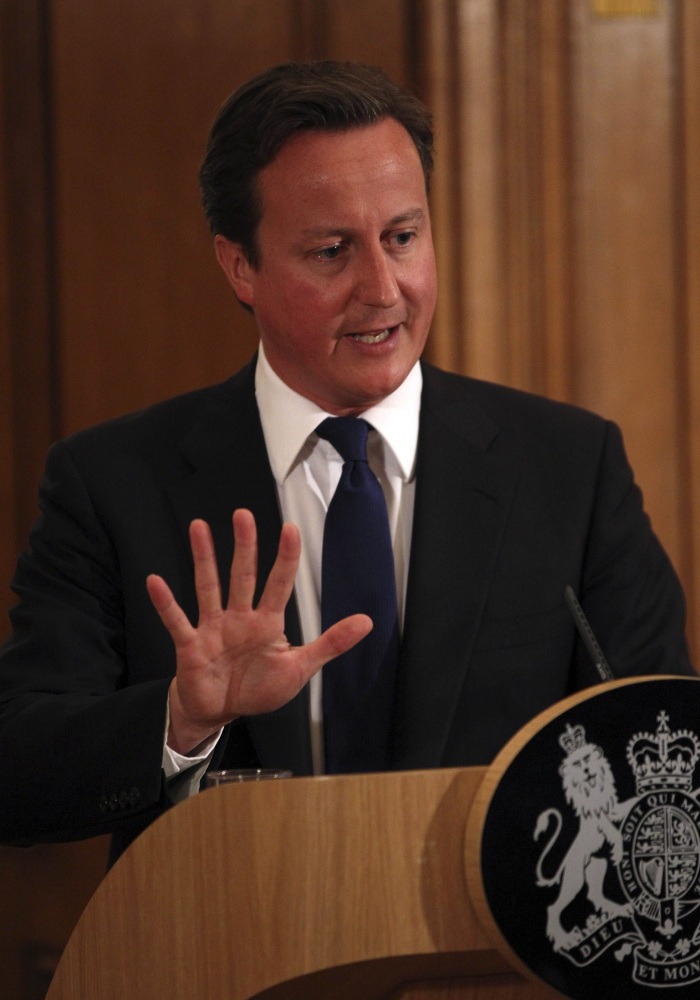 Britain's Prime Minister David Cameron promises a full investigation into the phone hacking and police bribery scandal that led to the collapse of the News of the World tabloid, at a press conference in London on Friday.

British Prime Minister David Cameron has announced two investigations into the phone hacking scandal that brought down Rupert Murdoch's News of the World tabloid and led to the arrest Friday of the paper's former top editor, a former Cameron aide.

"Over the past few days, the whole country has been shocked by the revelations about the phone hacking scandal: murder victims, terrorist victims, families who have lost loved ones — sometimes defending our country," Cameron said. "That these people could have had their phones hacked into in order to generate stories for a newspaper is simply disgusting. I cannot think what was going through the minds of the people who did this."

Cameron said the first investigation would be a public inquiry led by a judge into the question of illegal voice mail hacking by the press and the second would be a blue ribbon panel's review of the general practices of the newspaper industry. He also promised a full investigation to determine whether police officers took illegal payments from the News of the World and why an earlier police inquiry into the paper was shut down in 2006. He said self-regulation by newspapers had failed and pledged a new system.

"My starting presumption is that it should be truly independent. Independent of the press, so the public will know that newspapers will never again be solely responsible for policing themselves," Cameron said. "But vitally, independent of government, so the public will know that politicians are not trying to control or muzzle a press that must be free to hold politicians to account."

But Cameron blamed his own profession, too.

"The deeper truth is this: There is a less noble reason. Because party leaders were so keen to win the support of newspapers, we turned a blind eye to the need to sort this issue," he said.

Like former Labor Prime Minister Tony Blair, Cameron actively courted the support of the Murdoch papers. But he has unusually personal ties: He's friendly with James Murdoch, who oversees News Corp's British operations, and is close with Rebekah Brooks, a former News of the World editor who is now the chief executive of Murdoch's British papers. Cameron's former communications director, Andrew Coulson, is another former News of the World editor who resigned from the tabloid during an earlier stage in the scandal. 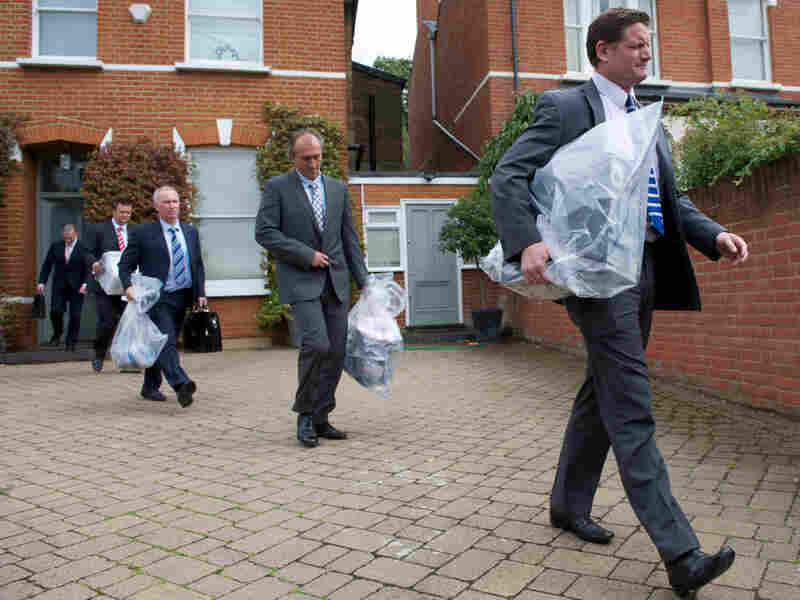 Investigators carry bags of evidence from the home of Andy Coulson, a former News of the World editor and Cameron aide, in London on Friday. Police arrested Coulson in the phone hacking scandal. Andrew Cowie/AFP/Getty Images hide caption 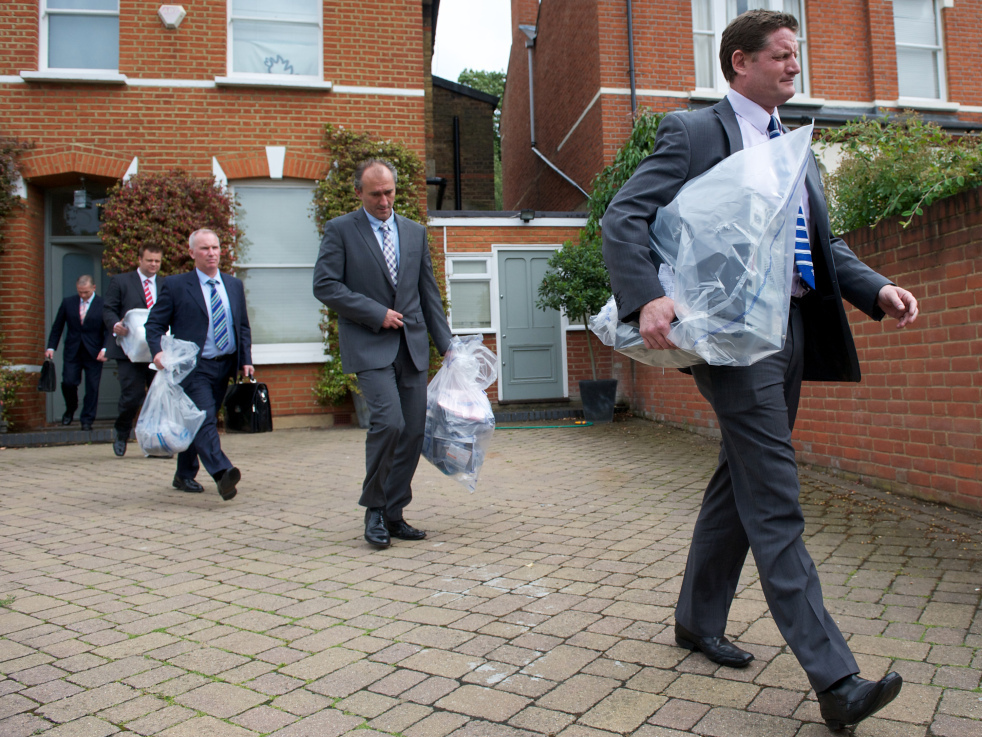 Investigators carry bags of evidence from the home of Andy Coulson, a former News of the World editor and Cameron aide, in London on Friday. Police arrested Coulson in the phone hacking scandal.

Even worse for Cameron: Friday's news of Coulson's arrest.

"I think we saw a prime minister today who still doesn't seem to get it," said Ed Miliband, leader of the opposition Labour Party. "I'm afraid he is someone who doesn't seem to be able to lead the change we need in the way the press works in this country, because he couldn't even bring himself to apologize for hiring Andy Coulson."

Until recent days, News Corp's push to take over the giant broadcaster BSkyB seemed ensured of approval by the government. But Cameron said Friday the review would take more time, and it is likely to be delayed further by new scrutiny from an independent regulator.

Then again, it seems as though there's a new development every few hours: The Guardian newspaper reports that Scotland Yard is now investigating whether a News Corp executive deleted millions of emails to obstruct its investigations.