Accessibility links
In Uganda, American Becomes Foster Mom To 13 Girls Katie Davis went to Uganda four years ago as a teenager to work in an orphanage. Today, the 22-year-old serves as guardian or foster mom for 13 young girls who share her home there. She wants to adopt them, but will the Ugandan government let her? 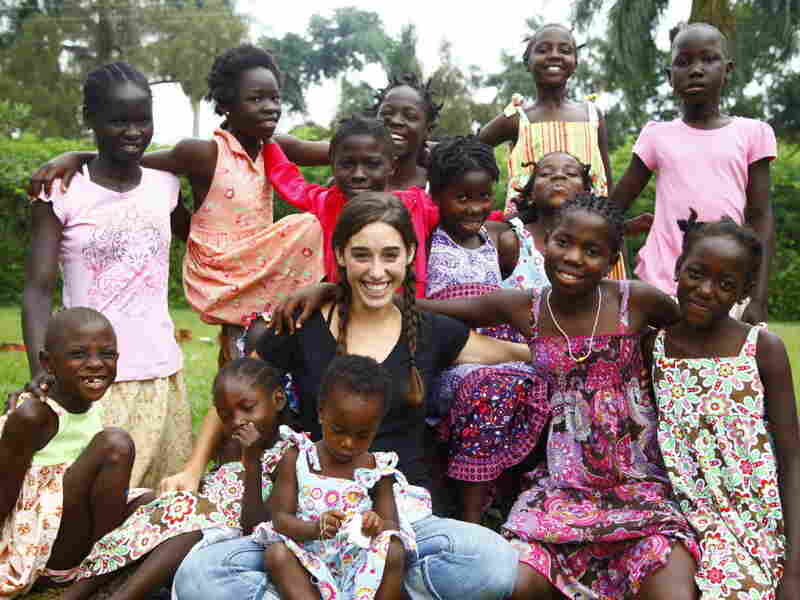 Four years ago, Katie Davis was homecoming queen at her high school in Tennessee. Today, she cares for 13 abandoned girls at her home in Uganda. Courtesy of Stylianos Papardelas hide caption 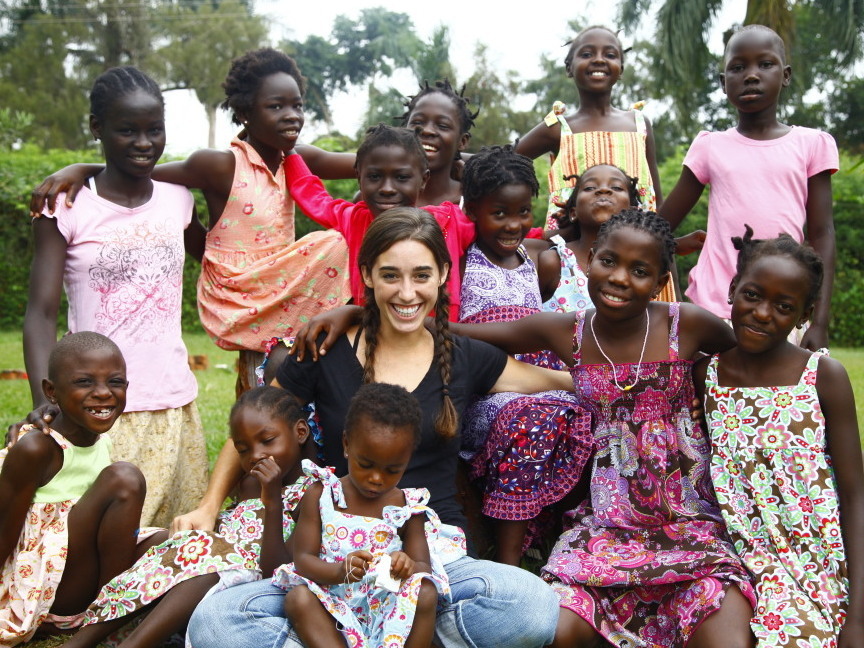 Four years ago, Katie Davis was homecoming queen at her high school in Tennessee. Today, she cares for 13 abandoned girls at her home in Uganda.

Four years ago, Katie Davis was homecoming queen at her high school in Brentwood, Tenn. She had a yellow convertible and planned to study nursing in college.

But those plans changed just a little. Today, she's in Uganda, sharing her home with 13 orphaned or abandoned girls, ages 2 to 15. Davis is the legal guardian or foster mother for all of them, and hopes to one day adopt them.

"I think that's definitely something that I was made for," said Davis, 22, a devout Christian who idolizes Mother Teresa. "God just designed me that way because he already knew that this is what the plan was for my life — even though I didn't."

Davis traveled to Uganda after her high school graduation in 2007, but saw it as a temporary move before starting college back in the United States.

She started teaching kindergarten at an orphanage in a small village near the town of Jinja. One night, in January 2008, a mud hut down the road from the orphanage collapsed on three small AIDS orphans during a rainstorm. One of the girls, Agnes, then 9 years old, was taken for medical treatment.

"I was in the hospital, and I asked Mommy whether if I can live with her, and she said, 'yes,' " Agnes recalled.

Davis couldn't find any living relatives willing to take any of the girls, and she refused to send them to an overcrowded orphanage.

"The workers are always changing," Davis said of the orphanages. "Even if you form a relationship with one of the aunties or mommas, or whatever they call them at the orphanage, that momma might leave."

Davis then rented a house to accommodate the three girls. Over the next 18 months, 10 more girls moved in. All had been abandoned or abused, or had watched their parents wither away from AIDS. 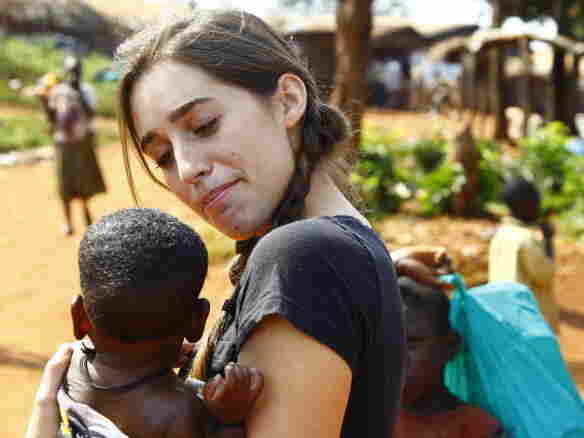 Davis has set up an organization that provides food, medication and school fees to Ugandan children. Courtesy of Stylianos Papardelas hide caption 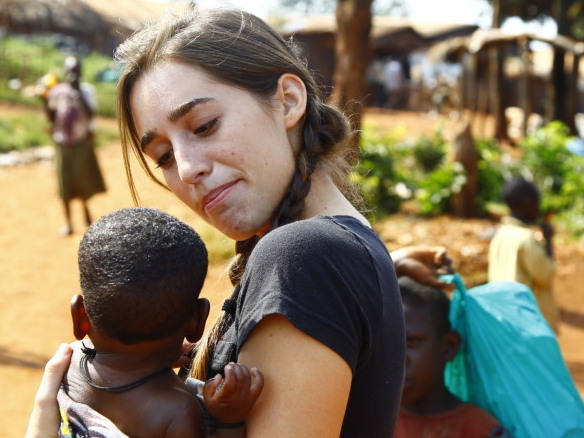 Davis has set up an organization that provides food, medication and school fees to Ugandan children.

The youngest girl, Patricia, now 2 years old, was literally given to Davis by an HIV-positive mother who had 11 other children.

"My first instinct is not, 'Oh, a baby — let me adopt it!' Because I think, best-case scenario, they're raised in Uganda by Ugandans," said Davis. "But knowing there is nowhere else for them to go, I don't find myself capable of sending them away."

Getting those 13 girls to sit down at the breakfast table is just the first of many hurdles Davis faces daily.

On a recent day, after rounding up the kids, Davis sat at the head of the table in a gray tank top and plaid boxer shorts, with her long brown hair pulled into braided pigtails. The girls then began to pray in unison. "Dear Jesus, thank you for food ... "

Davis is well-known in Jinja, where she drives her family around town in a 13-passenger minivan. She can apply to formally adopt the girls after serving as their caregiver for three years.

But not everyone supports her.

By law, Davis is too young to adopt in Uganda, said child welfare officer Caroline Bankusha. The rules say an adoptive parent must be at least 25 years old, and at least 21 years older than the child being adopted.

Apart from the age issue, Bankusha also disapproved of Davis taking care of so many children.

"Unless the children are placed under a children's ministry or children's home, which she can start, otherwise it is really bad for someone to have more than five children," she said.

Bankusha conceded that there's a legal loophole that allows judges to make exceptions in the "best interests of the child."

Davis said she has done everything by the book and is the court-appointed caregiver for all of the girls.

The oldest girl, 15-year-old Prossy, says it's certainly in her best interest to stay with Davis.

"I feel like she's really my mother," Prossy said, "because she shows me love and I feel like, yes, this is my mom."

Davis has also started a nonprofit organization called Amazima Ministries. With support from U.S. donors, Amazima helps 400 children go to school, provides community health programs and feeds more than a thousand children five days a week. Davis is the director, and the job supports her and her family.

As she washed her two youngest girls in the bathtub, David explained why she has taken on so much.

"People definitely ask me why so many? I don't know," she said. "These are the children that God brought to my door."

Even her own mother, Mary Pat Davis, had questions about what Davis was doing.

"A part of me thinks, gosh, is she giving a part of her life up at such a young age, taking on so much responsibility?" Mary Pat Davis said. "But my heart knows that she's so happy."

Mary Pat Davis now visits Uganda for a couple of months each year to help her daughter care for the Ugandan girls.

Katie Davis said she hopes to get married and have biological children someday. But right now, she has no plans to move back to the United States.

She did return briefly in the fall of 2008 and enrolled in nursing college, fulfilling a promise to her parents. But she quickly realized she missed the Ugandan kids too much. She dropped out and moved back.

"I can't imagine that I would ever be able to afford to raise this many children in America," she said. "We like our life, and we like our community."

At the end of another long day, Davis herded her girls off to bed and tucked them in, providing a glimpse of why she has stayed.

"I love you too, babe," Davis said. "Tell your sisters night-night."