Accessibility links
The Bottom Line: Murdoch's Influence In The U.K. The scandal that has collapsed the British tabloid, News of the World, and rocked the News Corp. empire, brings into question the pervasive influence of Rupert Murdoch's media holdings on British media and politics. 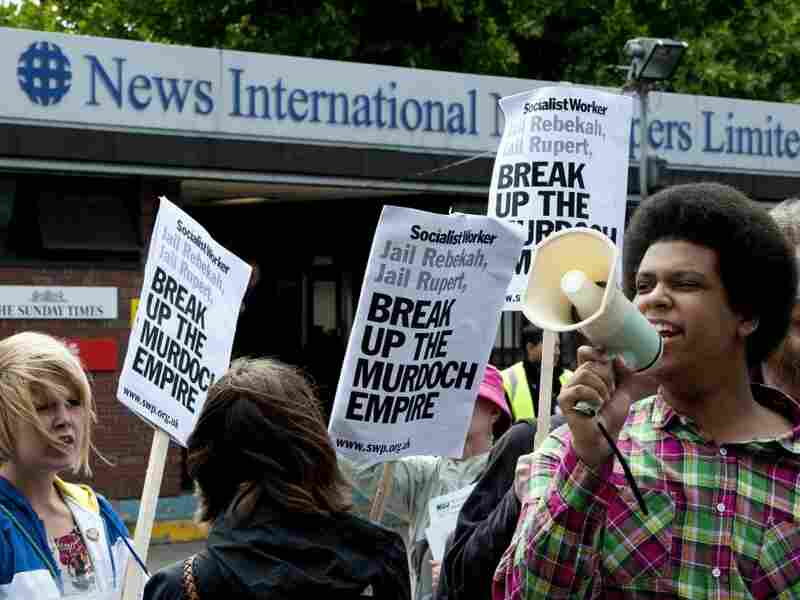 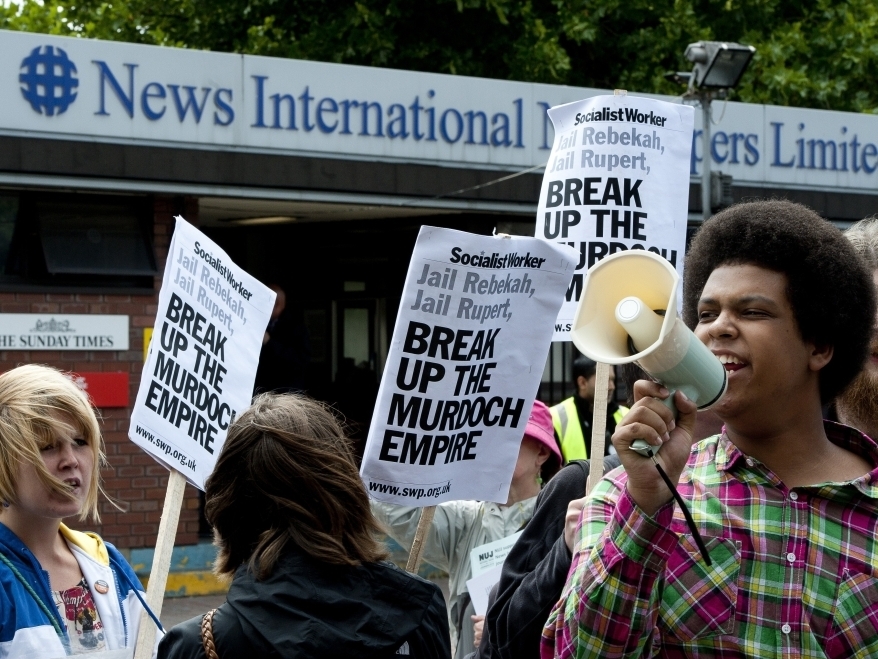 Demonstrators protest outside the headquarters of News International in London on Friday as Prime Minister David Cameron promised inquiries into a phone hacking scandal.

The scandal that has rocked News Corp. has brought to the fore the singular role played by its controlling owner, Rupert Murdoch. The media mogul's influence is exerted for a single-minded purpose in the U.K.

The past five prime ministers have courted Murdoch assiduously in gaining and holding onto office — none more so than Labour's Tony Blair. In plotting his path to 10 Downing St. in the mid-1990s, Blair once flew to an island off the coast of Murdoch's native Australia to address an annual meeting of News Corp. That impressed Murdoch, who threw his support behind Blair's New Labour movement.

"There are two reasons for Rupert Murdoch's clout in the U.K. One has been a perception that his newspapers have influenced the outcomes of elections. That's doubtful. What Rupert Murdoch does is before elections: He backs winners or political parties he thinks are going to win," Farrelly says.

Murdoch controls two of the most prestigious papers in the country, as well as the two most widely read, both tabloids. Despite his conservative leanings, Murdoch and his papers have swung to leaders of both major political parties, so his patronage constantly appears to be in play.

"There is the threat of intrusion, the sword hanging over people if they take powerful vested interests in the press on," he says. "And that's a fact of life."

Some people called Murdoch's News of the World "News of the Screws." His Sunday tabloid has been known for its brutal, gossipy takedowns of out-of-favor politicians. But no more. Murdoch's son, James, announced Thursday that Sunday's News of the World would be its last edition because of the cresting allegations about phone hacking and payoffs to police.

Simon Kelner, editor in chief of the London newspaper The Independent, says the closing of News of the World marks a pivotal moment for Murdoch and News Corp. in the U.K.

"They've used their power — in ways we know about and ways that we don't know about. What we've seen this week is not just the first cracks of the edifice," Kelner says, "but you've seen the edifice possibly begin to tumble."

Prime Minister David Cameron's ties to News Corp. executives are now a liability. Cameron is friendly with James Murdoch, he is close to Rebekah Brooks, the former News of the World editor who is chief executive over the company's newspapers, and he hired Andrew Coulson as his communications director after Coulson resigned as editor of News of the World in an earlier stage of the scandal. Coulson resigned from his government job in January, and Friday he was arrested for his alleged involvement in the scandal.

"There's no doubt it's been hugely damaging to the Murdoch interest in Britain," says Simon Jenkins, former editor of Murdoch's Times of London.

Jenkins says the alleged acts by the News of the World are indefensible, but have been blown out of proportion by rival news organizations, such as The Guardian and the BBC.

"Politicians have suddenly started to distance themselves from Murdoch because Murdoch's not popular. Other times politicians of both major parties craved his attention in the most groveling fashion," Jenkins says.

Now, even some members of Cameron's Conservative Party have sharp words, including Zac Goldsmith.

"Rupert Murdoch is clearly a very, very talented businessman. He's possibly even a genius, but his organization has grown too powerful and it has abused that power. It has systematically corrupted the police and, in my view, it has gelded this Parliament, to our shame," Goldsmith said during a recent debate at the House of Commons.

The Power Of TV

Cameron moved Friday to distance himself from Murdoch and News Corp., saying he owed the public something.

"Some frankness about what the politicians got wrong themselves. A relationship that became too close, too cozy. We were all in this world of wanting the support of newspaper groups and, yes, even broadcasting organizations," he says.

As Cameron hints, the real money is in TV. Murdoch also controls the nation's largest broadcaster, nicknamed BSkyB, but actually owns only 39 percent of it. He wants it all and was expected to get swift approval from the government. Cameron now says the review will be slowed, and a separate regulatory agency now signals it may evaluate the bid as well.

The Independent's Kelner says the new uncertainty surrounding the bid for the broadcaster is at the root of the decision to shut down the tainted tabloid.

"There is an argument to say that Murdoch made a very careful — other people might say cynical — calculation. What was worth more to him: News of the World or full ownership of BSkyB?" Kelner says.

The BSkyB deal would generate several billion additional pounds annually for News Corp., and as former editor Jenkins points out, in the U.K. Murdoch's influence is ultimately not in pursuit of political power. It's about the bottom line.