Accessibility links
Stan VanDerBeek: Film On The Cutting Edge The legendary experimental filmmaker's work is the subject of a career-spanning retrospective at the Contemporary Arts Museum in Houston. VanDerBeek merged collage-style filmmaking with new technology throughout his career.

Stan VanDerBeek is a legendary name in the history of experimental film. A restless adventurer who began making experimental animated films in the 1950s, VanDerBeek filmed happenings, designed windows for Tiffany's and worked with John Cage and Claes Oldenburg.

He also explored the artistic possibilities of new technologies of his time: video, computers, even the fax machine. He was artist-in-residence at Bell Labs and at NASA.

Now, a survey of VanDerBeek's work is on display at the Contemporary Arts Museum in Houston.

VanDerBeek's 1963 film Breathdeath is full of animated collages satirizing gender roles and politics. There's also an arresting staged scene — a woman sits on a bed nuzzling a figure made from an empty shirt and trousers, topped by a television set showing men's faces; she looks into the camera while "I Put a Spell on You" wails on the soundtrack.

Everything that artists made art from, or with, in the second half of the 20th century, he pretty much touched.

VanDerBeek made dozens of these collage films in the 1950s and early '60s, using altered clippings from magazines and newspapers to create whimsical but pointed commentary. The films look like they must be the primary inspiration for Terry Gilliam's Monty Python animated sequences, which appeared a few years later.

But VanDerBeek did not start out as a filmmaker. He attended Black Mountain College in North Carolina to study visual art. There he met people who were transforming art: composer John Cage, choreographer Merce Cunningham, painter Robert Rauschenberg. But painting wasn't enough for VanDerBeek.

"VanDerBeek called himself a technological fruit picker," says Joao Ribas, who is curator at MIT's LIST Visual Arts Center. The LIST Center was the first stop of the VanDerBeek exhibition, which Ribas and Bill Arning, director of the Houston museum, organized. Ribas says VanDerBeek reached higher and higher for more interesting fruit.

"Everything that artists made art from, or with, in the second half of the 20th century, he pretty much touched. The medium, whatever he was working with, was not adequate enough. Painting was too static, and then one film was too linear, and then four films were too cumbersome," says Ribas. VanDerBeek had "this sense of constantly trying something else that could get closer and closer to what he saw."

VanDerBeek's only technical training in filmmaking came from working on animation for a CBS children's show in the 1950s. He would use the editing equipment after hours to complete his own films, cajoling the night watchman to let him in even after he lost the job. The collage films were designed and created at his home, as his oldest daughter, August, recalls.

"I would sit on his lap and he would show me how to edit and move and cut collages around. He had magazines and I'd help cut," she says. "And one thing that my mother was reminding me of was that during the performances he would have my brother and I, Max VanDerBeek, walking around with tape players of ocean sounds or airplane sounds."

This was an early informal version of the much more complicated multimedia works her father created as his cinema expanded. He incorporated dance, performance, slides and movie clips, collaborating with giants of the avant-garde (and fellow Black Mountain alumni) such as Cunningham and Cage. 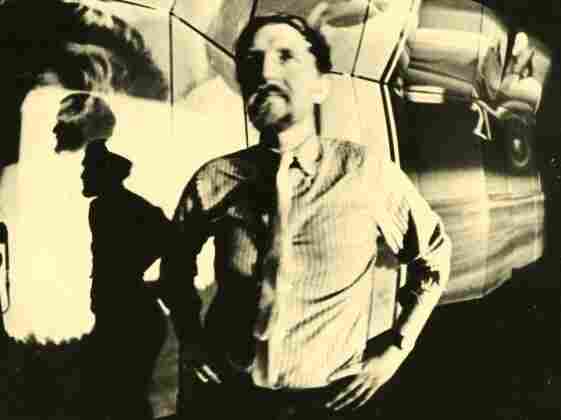 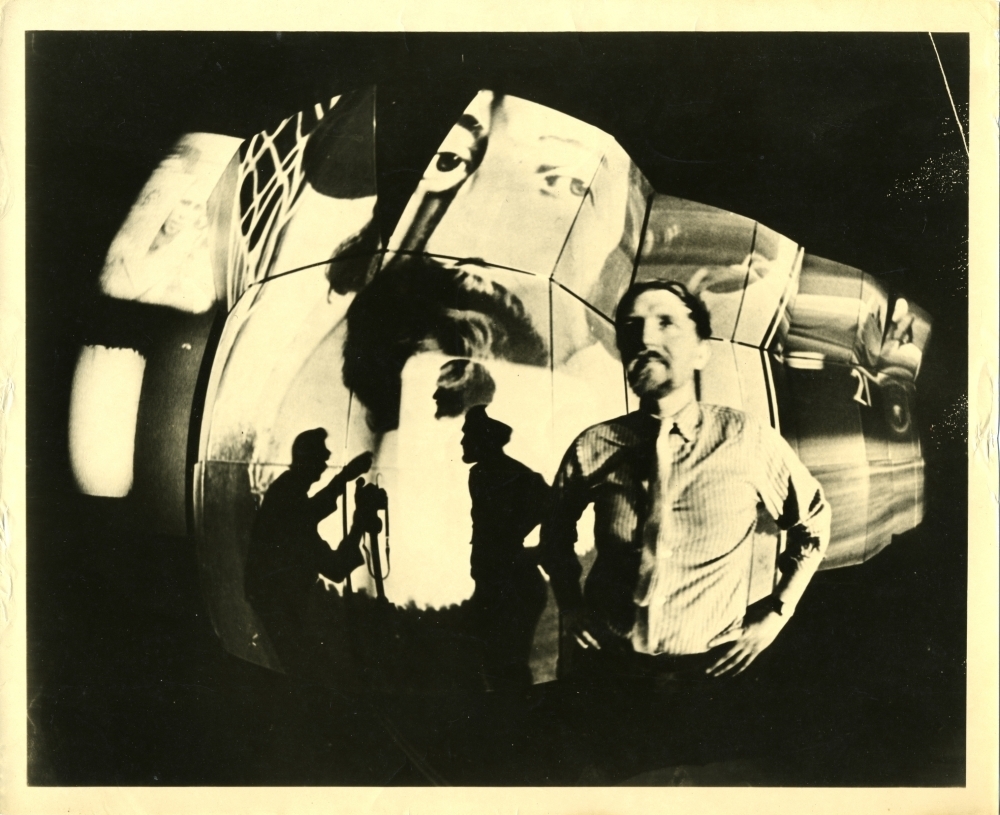 In the mid-'60s, VanDerBeek ordered a grain-silo kit and used the top to build a domed theater in the artists' cooperative where he lived in rural New York. The inside space was 31-feet high. August VanDerBeek says she helped build what her dad called the Movie Drome.

"There was of course a big event when everybody came from New York City," August recalls. "Andy Warhol and different people came to see the first showing. We had a beautiful cloth and pillows. There was a circular tray that was about probably 10 feet or 12 feet in diameter, that had many slide projectors and a lot of 16mm projectors, and it would just spin around the whole room. We would lie down and watch this incredible collage of images. He would find slides. He would make films and then edit them for the pieces."

Her father made a somewhat portable version called the Movie Mural that curators have tried to approximate in Houston. It's not really a dome and not quite wraparound. The table of projectors still has those cranky antiques — the carousel slide projector — but it's updated with video projectors too, since 16mm projectors could not run for hours without breaking down. The table doesn't spin, as the original did in the Movie Drome, but it still creates a dizzying array of sight and sound.

Blues music overlaps with Hollywood film clips of Gene Kelly or Humphrey Bogart. Photos of classical statuary and temples slide in next to VanDerBeek's own kinetic line drawings of figures. Newspaper headlines compete with the Rolling Stones. The Movie Mural is the dominant feature in the exhibition; no matter where you are in the Museum's long open space, you can always hear that energetic circus of sound.

VanDerBeek envisioned a global network of these environments linked by satellites. He called it the Culture Intercom (also the title of the exhibition). The term suggests a prescient imagining more than 40 years ago of today's Worldwide Web and social media.

VanDerBeek recorded his exuberant notes and proposals for the future on media that is now obsolete media or quite perishable: yellowing notebook paper, paper punch cards he used with some of the first computer-imaging software at Bell Labs, floppy disks, film stock that crumbles away. The exhibition reclaims this material in all its intimately detailed glory, right down to hand-drawn maps for people coming to the Movie Drome.

The exhibition also reclaims VanDerBeek's vision of the artist's role in the flood of technology, says curator Ribas:

"I think he really thought that artists were supposed to interject into the process of the technology being developed and in a sense humanize it's potential."

Sara VanDerBeek, his younger daughter and an artist herself, worked closely with the curators. She says the family wanted to convey Stan VanDerBeek's approach and spirit rather than following a diagram. After all, he didn't. He improvised, according to the moment and the place — even taking advantage of mishaps — when it came to the content of these multiprojector sound and image presentations.

"He did not document his installations very extensively," Sara says, "but I'm working off of photographs from notebooks and charts about what was on the different carousels, and film programs."

What she likes to call this "approximation" is titled "Movie Mural 1968-2011" precisely because she had to fill in some of the blanks, as well as adapt it to a museum setting.

"I thought of it almost like when you print a new print from a pre-existing negative, that it is a contemporary iteration of it, but some of the core elements come from that time period."

VanDerBeek made few recordings of himself, says Sara. A video called Newsreel of Dreams: Part I, however, caught her ear while installing the exhibition.

"It was as though he was there. It really struck me. His voice in the context of all this whirling machinery and everything and him speaking about dreams — It was kind of this beautiful succinct moment that really explains his whole perspective."

Newsreel of Dreams: Part I (made in 1976) features several retellings of dreams with figures in bright, mysterious video color manipulations. And at the end, a calm everyday voice extends an invitation to the world. "If this project interests you, and you would like to offer me your dreams or dream-related experiences for future projects, please write them to me, Stan VanDerBeek, care of the Art Department, Dream Media Research."

VanDerBeek then gives the address of the University of Maryland in Baltimore County, where he led the visual arts program until his death from cancer in 1984, at the age of 57.