Accessibility links
Migrants Work For The Future, Sing To Remember The northwestern United States is entering one of its latest cherry seasons. As migrant workers pick the fruit in a lush Washington orchard, they sing to remember loved ones back in their native countries. 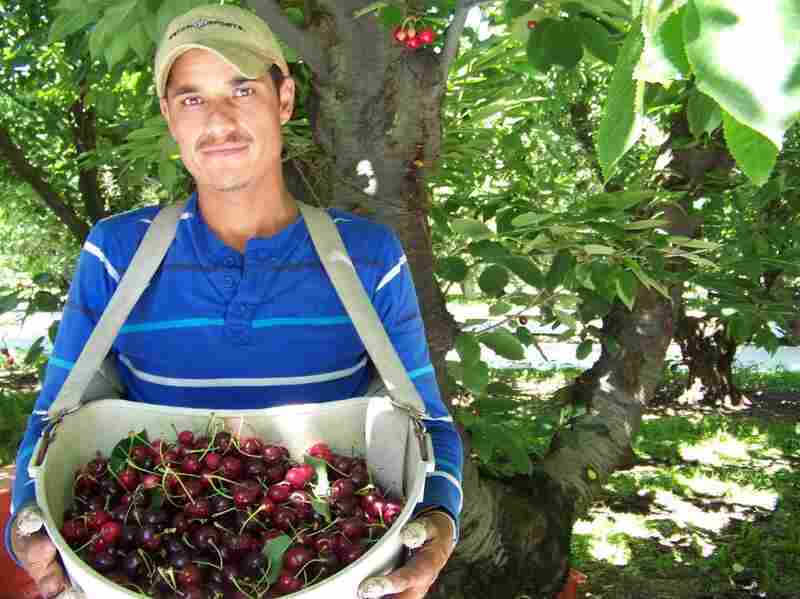 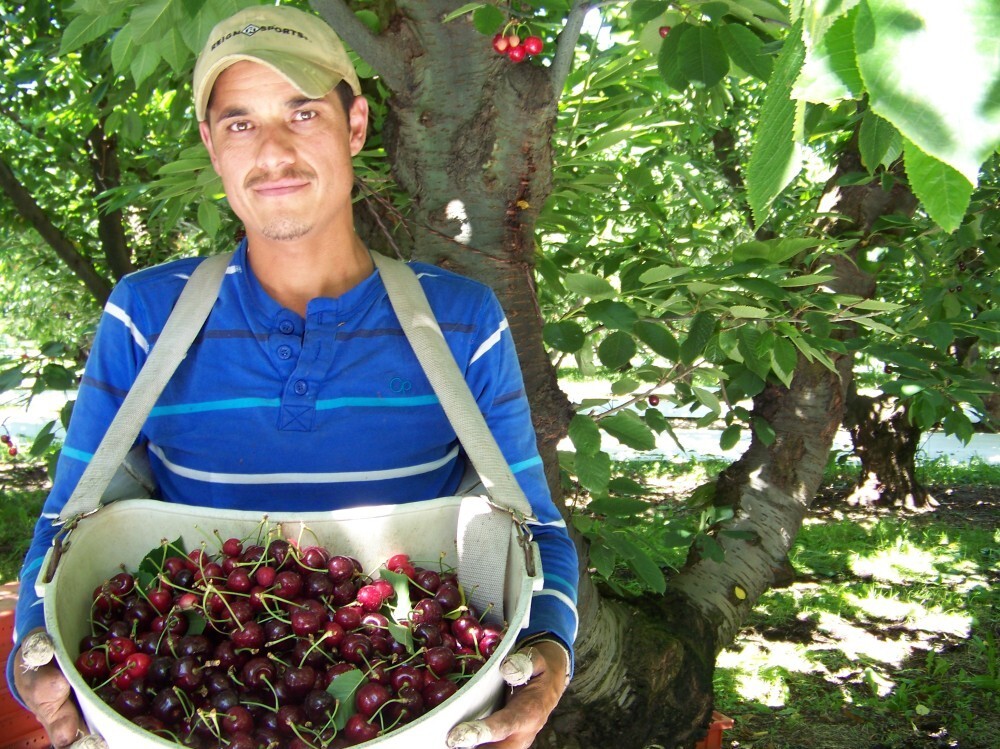 Francisco Suares, 32, of Michoacan, Mexico, harvests ripe bing cherries at Broetje Orchards near Prescott, Wash. Although he has only two fingers on his right hand, he's still a quick picker.

Cherries are finally ready for harvest in the northwestern United States. A cold spring means that this is the latest cherry season anyone can remember.

One of the largest fruit orchards in the world is located in the hot, dry and dusty desert country of southeastern Washington. At the Broetje orchards, cherry trees create an emerald canopy. It's 4,400 lush acres on a bend in the Columbia River.

The feet of the cherry pickers peek out from the trees' branches on tall aluminum ladders. Their bodies and faces are hidden up in the leaves. The 12-foot ladders shift and the cherries thud softly in buckets.

A surprise comes for those who wait long enough: Many of these migrant workers sing to pass the time.

Francisco Suares is 32 and from Michoacan, Mexico. Even though he's lost three fingers on his right hand, he's still a fast cherry picker. He says he misses his mother and father who are back in Mexico, but singing helps him feel closer to them.

Nearby is Angelica Rocha Silva. She has a young, open face. Her fingers are wrapped in medical tape to protect them from the rough branches. She says she sings to remember her first boyfriend. He stayed in Mexico, but she came here after college to look for work. That was three years ago.

Picking cherries is one of the best-paying agriculture jobs in the Northwest, but it's still dangerous. A young woman named Maria falls from her ladder. An ambulance takes her to the hospital. She's now recovering at home.

Nearby the singing stops, but the cherry picking continues. The workers take few breaks. They're not paid by the hour; they're paid by how much they pick.

Jose Fernando Machado Beltran says singing helps him get through any sadness and these long, hot days in Broetje orchards.

Dreams And Danger: Notes From The Migrant Trail July 8, 2011