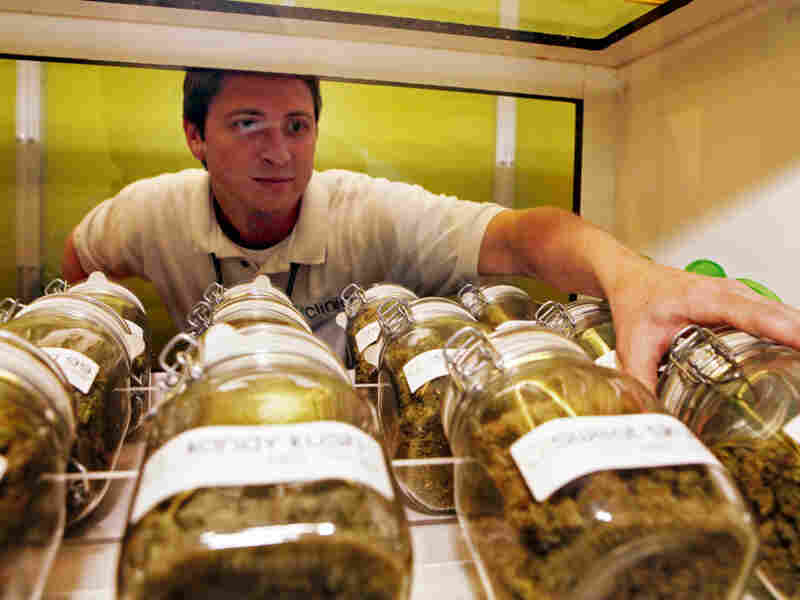 Ryan Cook reaches for a jar of medical marijuana at one of his clinics in Denver last month. With over 300 dispensaries, the city now has more places to buy pot than Starbucks. Ed Andrieski/AP hide caption 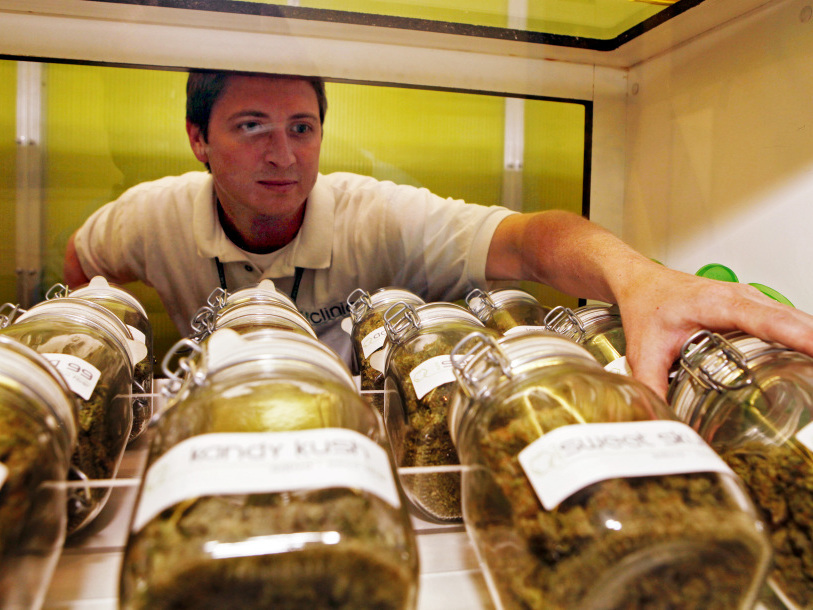 Ryan Cook reaches for a jar of medical marijuana at one of his clinics in Denver last month. With over 300 dispensaries, the city now has more places to buy pot than Starbucks.

Denver is at the peak of a citywide pot boom.

It all started after the U.S. Attorney General's office — in a shift of policy since the Bush administration — announced in 2009 that it would not prosecute marijuana users if their state permits use of the drug for medical reasons.

"It just blew up from there," William Breathes tells Weekends On All Things Considered host Guy Raz. Colorado had permitted use of medical marijuana since 2000, but now it had a stamp of approval from the federal government.

So Breathes — employed by Westword, Denver's weekly alternative newspaper — became perhaps the first professional marijuana critic in the country. William Breathes is his pen name, of course. Like a food critic, he remains anonymous to the businesses he reviews.

"We have more than 100,000 licensed medical marijuana cardholders in the state," he says. That's fueled the growth of dispensaries, which now outnumber Starbucks in Denver. More than 300 dispensaries are in business citywide.

That's a lot of options for readers of Westword, Breathes says.

"When I'm reviewing marijuana, I'm looking for how clean it's grown, how well it's grown," he says. But he's also reviewing the dispensary itself.

"How would an older patient feel going into this place?" he says. "How would someone new to cannabis feel in this place? If it makes me feel icky going into a place, then it would probably make my grandma feel icky. And there's plenty of grandmas around the Denver community with medical marijuana cards going to these dispensaries."

Once grandma has a doctor-issued card, Breathes says, state law permits her to purchase 2 ounces of marijuana a month. That's somewhere between 30 and 60 joints at around $170 per ounce.

Breathes has been using marijuana medically for years to treat chronic stomach pain, but also enjoys it recreationally. He has a background in journalism. And even when he's smoking, he always makes his deadlines.

"Late at night," he says. "That's when I get some of my best writing done."