Accessibility links
As Income Gap Balloons, Is It Holding Back Growth? There's no question the economic recovery is going slowly. There's also no question that the gap between rich and poor Americans has grown wider than any time since the Great Depression. Analysts explore the links between income inequality and troubles in the overall economy. 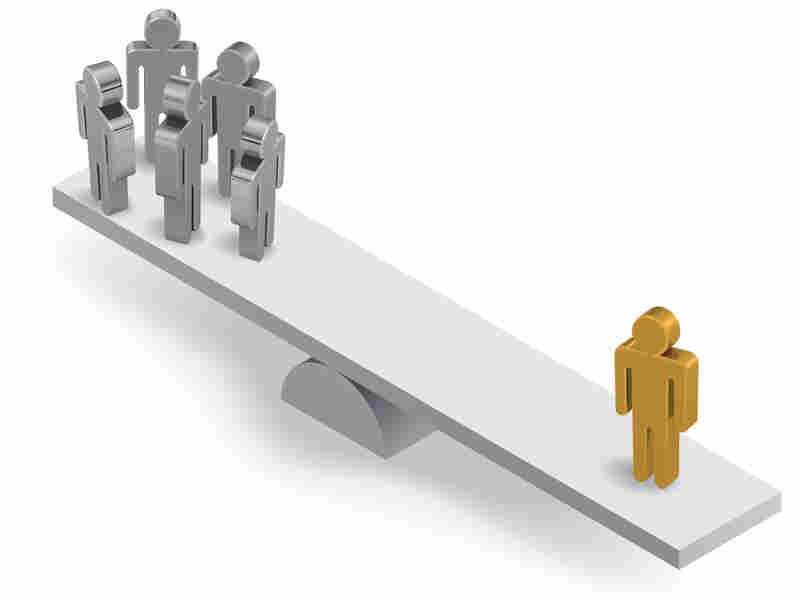 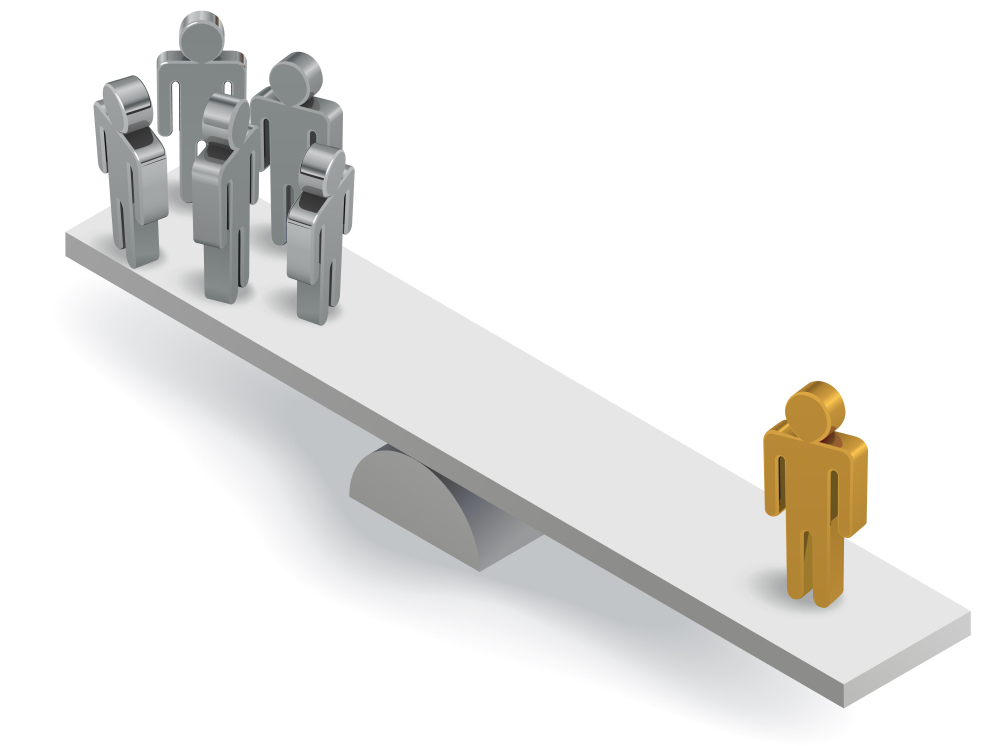 Members of the Federal Reserve Board of Governors tend to speak cautiously: Their words can move markets. Yet last month, Fed governor Sarah Bloom Raskin was remarkably candid about the growing gap between America's rich and poor.

"This inequality is destabilizing and undermines the ability of the economy to grow sustainably and efficiently," she said. Income inequality, she continued, "is "anathema to the social progress that is part and parcel of such growth."

The income gap in the United States has ballooned: It's wider than any time since 1928, in the days before the stock market crash triggered the Great Depression.

The numbers are startling: Top CEO salaries were up 23 percent last year, according to the New York Times; the average worker's pay was up only .5 percent. Meanwhile, the top 0.1 percent of American earners now take in more than 10 percent of the nation's collective income. That puts the U.S. in the same inequality ballpark as developing countries like Cameroon and Ivory Coast.

This degree of income inequality has produced plenty of outrage — most of it about the moral implications of the gap.

But is income inequality putting the brakes on the stalling economy? And how did the gap between the wealthy and the middle class get so big?

A dairy business in Illinois may hold some answers.

From Cadillac To Corporate Jet

The idea that people make the same or less today than they made 40 years ago is a stunning historical fact.

Kenneth Douglas had the good life. He had a three-bedroom house in the Chicago suburbs. He drove a Cadillac to work. He belonged to a country club.

Douglas was the CEO of Dean Foods, a dairy company. During his tenure from 1970 to 1987, Dean increased its yearly sales from $165 million to $1.4 billion. Yet his annual salary never topped $1 million.

According to Peter Whoriskey of The Washington Post, "The board said, 'We want to give you some more money' " as a reward for the company's success. "And he would say repeatedly, 'No.' He was making enough."

Whoriskey reports that the culture of corporate modesty at Dean Foods is a relic. The current CEO, Gregg Engles, lives a much different life.

"He has averaged about $10 million a year," Whoriskey tells weekends on All Things Considered host Guy Raz. "He's got a $6 million house in Dallas. He's got property in Vale. He's got membership at four different golf clubs. He's got a corporate jet."

"It's a whole new level of executive grandeur that we see today."

But while the current CEO of Dean Foods makes 10 times the amount the company's CEO did 30 years ago, the rest of the employees make on average 9 percent less than they would have in the 1970s, after you adjust for inflation.

So how do the employees feel about executive pay?

"They were resentful of it," says Whoriskey. "But for the most part, they were just trying to figure out how to get by. They honestly said they were just happy to have jobs."

Economists disagree widely about how the U.S. has gotten to this point. Some blame globalization and technology for eliminating manufacturing jobs. Others say our education system hasn't done enough to keep America competitive. Some argue the power of unions has gradually declined.

Jeff Madrick, the author of Age of Greed: The Triumph of Finance and the Decline of America, traces U.S. inequality to changes in U.S. economic policy several decades ago.

"In the 1970s, there was an assault on government oversight and regulation," Madrick tells Raz. "And eventually, the financial community stopped playing by the rules. There was an economic theory that kept justifying what they were doing. And the American public was not fully aware of what was going on."

Growing levels of income inequality are associated with increases in crime, profound strains on households, lower savings rates ... those are all forces that have the potential to drag down economic growth.

Sarah Bloom Raskin, of the Federal Reserve Board of Governors

The traditional argument for deregulation states that those policies make America richer, and that a rising tide lifts all boats.

But Madrick says that for the typical American worker, the wage tide has gone out since 1969.

"The typical male worker makes less today, discounted for inflation, than the typical median worker made in 1969," says Madrick. "The idea that people make the same or less today than they made 40 years ago is a stunning historical fact."

David Moss is a professor of economics at Harvard Business School. Back in 2008, he was researching U.S. bank failures from the 19th century to the present. He charted those failures over time and found an interesting pattern.

"They peak up in crisis years. They peak in the 1920s," Moss tells Raz. "But then most striking, after 1933, when we saw the introduction of federal banking and financial regulation, these banking crises disappear almost completely. And then it continues very, very low until the 1980s, then they pick back up again."

Moss found it striking that banking failures go down after financial regulation and start rising after the introduction of deregulation.

Then, one of Moss' colleagues showed him a chart of income inequality over the same period. Moss took that curve and plotted it on the same page as his bank failure curve.

"And lo and behold, it was a striking, striking connection," Moss says.

For Moss, this coincidence raises more questions than it provides answers. He isn't sure what exactly the correlation between income inequality and financial failure means.

"Is there a connection especially between extreme inequality and economic growth?" Moss asks. "Does it cut down on demand? Spending not as vibrant? Do we see more borrowing? Do we see more risk taking at excessive levels? Deregulation feedback loops?"

These are questions Moss hopes he can answer with future research.

Raskin tells Raz that "growing levels of income inequality are associated with increases in crime, profound strains on households, lower savings rates, poorer health outcomes, diminished levels of trust and people and institutions — those are all forces that have the potential to drag down economic growth."

If income inequality can negatively affect the whole economy, then what can be done to combat it?

Social Solutions To An Economic Problem

One year ago this month, Congress passed the Dodd-Frank financial reform bill, designed to increase oversight and regulation of the financial markets.

But so far, unlike the regulations put in place after the Great Depression, Dodd-Frank hasn't done much to shrink the inequality gap. Regulators say they've struggled to implement the bill's many rules. Many are being rolled out well behind schedule.

He says that World War II had a profound effect on how executives saw themselves in American society.

"I think that probably led many executives to not even think about asking for the kind of salaries that are now typical," he says. "It wouldn't have seemed right."

Moss wonders what sort of programs could foster that same feeling in the CEOs of today.

"Could there be some kind of compulsory or voluntary public service at a young age, where people come together across groups that don't normally come together?" Moss asks.

Income Inequality and Bank Failures in the 20th Century