Accessibility links
Social Networks: Thinking Of The Children More and more kids under age 13 are using Facebook and other social networking sites. Is this a good thing?

Social Networks: Thinking Of The Children

Social Networks: Thinking Of The Children

Andy Affleck is debating whether to allow his 11-year-old son, Jack, to have a Facebook account. Director of engineering at a small tech company near Providence, R.I., Affleck says he feels very strongly "that children need to be socialized in the online world just as much as they do in the real world." 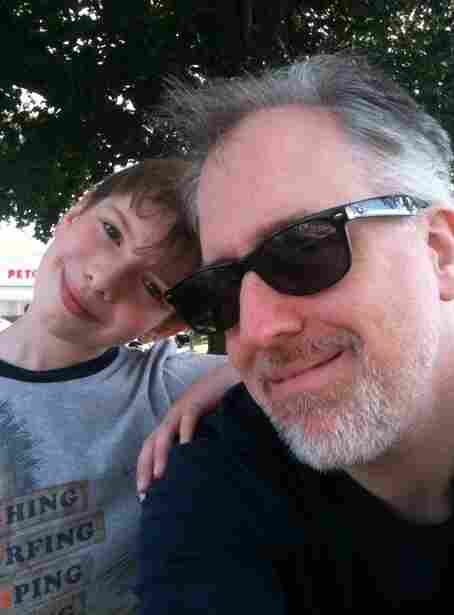 So Affleck the elder, who ponders these things on his Webcrumbs blog, is thinking about creating a Facebook page for Affleck the younger.

It all began last fall when young Affleck was playing FreeRealms, an online fantasy game, and wanted to be able to chat with his fellow gamers. He also was annoyed by the limits to interaction on the designed-for-kids Webkinz site. And he got interested in videoconferencing with friends on Skype. Then he told his dad he wanted a Facebook account.

If Andy Affleck does sign Jack up for Facebook, he won't be alone. Despite ominous reports of cyberbullying and "Facebook depression" among young people, the number of parents who are cool with their children — between the ages of 10 and 12 — having a social media account has doubled in a year.

It is legally verboten — by the Children's Online Protection Act of 1998 — for a website to collect personal information or track the cybertrail of anyone younger than 13, without parental consent. Rather than create software to prevent digital tracking, most sites insist that users be of age. Many general-interest, multigenerational social media websites — like Facebook, MySpace and Twitter — solve the problem by requiring that all users be at least 13 years old.

Still, kids will be kids. And recently it has come to light that millions of young people are flouting the rules to create accounts on the social networking sites. According to the New York Times, a 2009 survey by the Pew Research Center's Internet and American Life Project reported that 38 percent of 12-year-olds in the United States participate in social networks. And in June 2011, Consumer Reports estimated that about 7.5 million people who use Facebook are younger than 13.

Facebook — the mother of all social networks with some 500 million users — makes it clear when you sign up for the service: "If you are under age 13, please do not attempt to register for Facebook or provide any personal information about yourself to us."

In some homes, parents set up accounts in their kids' names and, perhaps using shared passwords, monitor the activity of their children. In others, young folks are so techno savvy, they easily slip around the rules, lie about their ages and set up their own accounts under false pretenses.

This can open up a world of possibilities — and perils.

The many dangers of social media for young people are well publicized:

A report in April — released by the American Academy of Pediatrics — titled The Impact of Social Media on Children, Adolescents and Families even warns of "Facebook depression," a condition caused by obsessing over the social network.

In May 2011, NPR's midday show Tell Me More discussed young people and social media. Mario Armstrong, host of the Digital Cafe on member station WYPR in Baltimore, told TMM's Michel Martin that parents who allow their children to join social networks should:

Parents Talk How Old Is Old Enough For Social Media May 31, 2011

But the academy also says social media can be beneficial to younger users. When the report was published, co-author Gwenn O'Keeffe said, "For some teens and tweens, social media is the primary way they interact socially, rather than at the mall or a friend's house. ... A large part of this generation's social and emotional development is occurring while on the Internet and on cellphones. Parents need to understand these technologies so they can relate to their children's online world — and comfortably parent in that world."

Children using social media should be educated about the possible pitfalls of interaction with strangers, according to the report, and they should be monitored by parents. But the findings also lay out the positive effects of virtual interaction: "Engagement in social media and online communities can enhance communication, facilitate social interaction and help develop technical skills."

Online hobnobbing can enable youngsters to discover opportunities for community service and volunteering "and can help youth shape their sense of identity," the report states. "These tools also can be useful adjuncts to — and in some cases are replacing — traditional learning methods in the classroom."

Use of social media has become so widespread among young people, according to the report, many pediatricians have added this question to their patient forms: "Are you on Facebook?

"My philosophy is that for education, you need to start at a really, really young age," Zuckerberg said. He said he would like for young kids to be on Facebook, but for now the Children's Online Privacy Protection Act makes it unfeasible.

Facebook has no plans to create a social network space for people younger than 13, says the company's online safety specialist Nicky Jackson Colaco.

"Facebook is currently designed for two age groups — 13- to 18-year-olds and 18 and up — and we provide extensive safety and privacy controls based on the age provided," Colaco says. "However, recent reports have highlighted just how difficult it is to implement age restrictions on the Internet and that there is no single solution to ensuring younger children don't circumvent a system or lie about their age."

There appears to be some belief that the age of 13 is magical — that children with no other socialization will magically be able to handle the online world and, by the same token, kids younger cannot. What is missing from all of this is parental judgment.

Educating users, Colaco says, "is critical to ensuring that people of all ages use the Internet safely and responsibly. We agree with safety experts that communication between parents or guardians and kids about their use of the Internet is vital. We believe that services such as Facebook have a role to play in encouraging this."

She points to recent announcements by Facebook about social reporting and its Family Safety Center as testimony "to our ongoing efforts to ensure we are giving detailed and helpful advice to help support these conversations."

After all, Colaco says, Facebook is based on a real-name culture, where people's actions are associated with their true names and identities. Users are encouraged to report abuses. And, according to Facebook's terms of service: "If we learn that we have collected personal information from a child under age 13, we will delete that information as quickly as possible. If you believe that we might have any information from a child under age 13, please contact us."

'Back Alleys Of The Web'

Tony Bradley, writing in PCWorld, suggests that Facebook should accommodate younger users by developing additional protections. "Implementing a privacy-by-default model would be a great start," Bradley writes. "But, Facebook should also provide controls so that only parents can change privacy settings or accept friend requests on accounts for minors, or something to that effect."

In the end, Bradley writes, "Facebook is far less shady than a lot of other online destinations that kids can get to just fine without parental consent. As far as I'm concerned, I would rather have my kid safely entrenched in Facebook than out wandering the 'back alleys' of the Web."

That is pretty much the conclusion that Andy Affleck has reached. He has also decided that 13 — though set by Congress — is a fairly arbitrary age limit. "There appears to be some belief that the age of 13 is magical," he says, "that children with no other socialization will magically be able to handle the online world and, by the same token, kids younger cannot. What is missing from all of this is parental judgment."

Affleck says, "My son is intellectually ready to handle what is out there — at least the walled-garden portions of it such as Facebook and the like. What I believe all of these sites should have is the ability for parents to sign off on their children's membership, possibly with an agreement that below a certain age they will take an active interest in what they are doing and provide guidance."

There are other social networks besides Facebook. Some are even designed for the under-13 crowd.

But, says Parry Aftab, a lawyer who specializes in Internet privacy issues, "unless we find alternatives to Facebook for preteens, we will continue to have kids lying about their age, or their parents allowing them to lie, to join Facebook and other full-sized social networks. Also, no one knows who a 'parent' is. How would we prove that anyone is the parent — or legally authorized parent — of a preteen?"

Aftab is the author of A Parent's Guide to the Internet and founder of the online children's safety organizations WiredSafety and StopCyberbullying. She has advised many social network sites, including Facebook.

Striking the right balance between fun and safety on a social network site for kids can be a Goldilocks-type challenge, Aftab says. "Sites err on too hot or too cold; few do it just right. Several interesting social networks for preteens were created, only to be out of business 10 months later."

And, to boot, kids don't necessarily want to hang out with younger kids. They want to be around older kids. "It's time that we understand that like it or not, preteens want social networking," she adds. "And until or unless Facebook creates special family accounts or a special Facebook for preteens, there is a need and a market."