Accessibility links
End Of Shuttle Program Leaves Thousands Jobless Nearly 8,000 people who worked on the space shuttle were laid off, which is a blow to an area where unemployment is well above the national average. But even as the era ends, many on the Space Coast remain optimistic about the region's future. 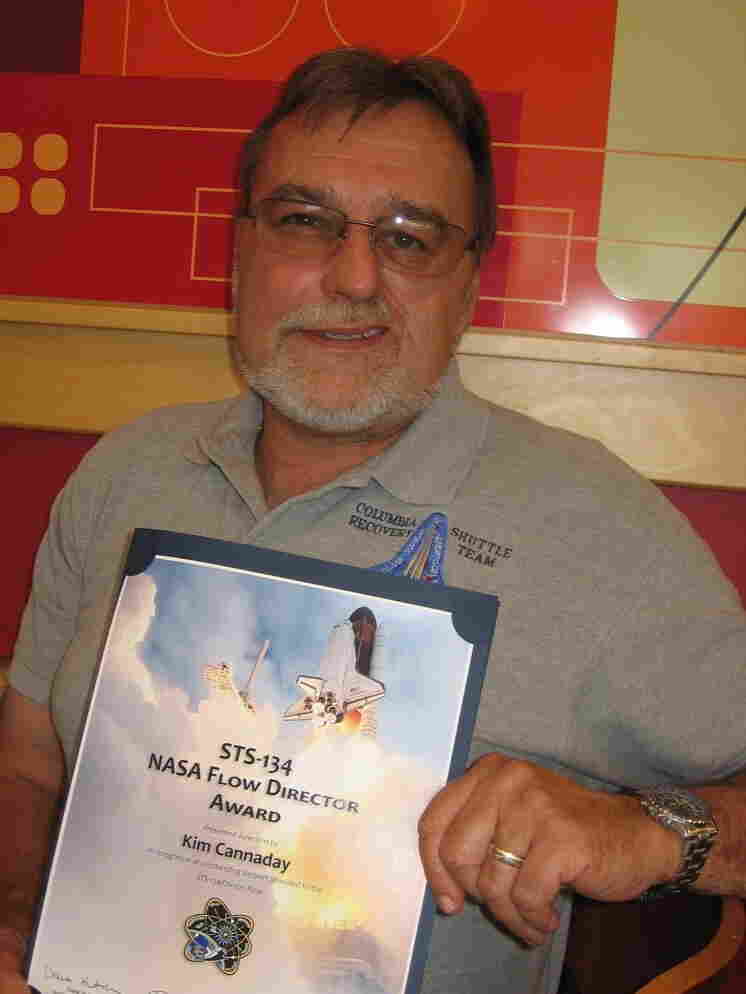 Kim Cannaday shows off a citation he recently received for outstanding work on the shuttle. Cannaday, along with thousands of other who worked on the shuttle, were laid off. Greg Allen/NPR hide caption 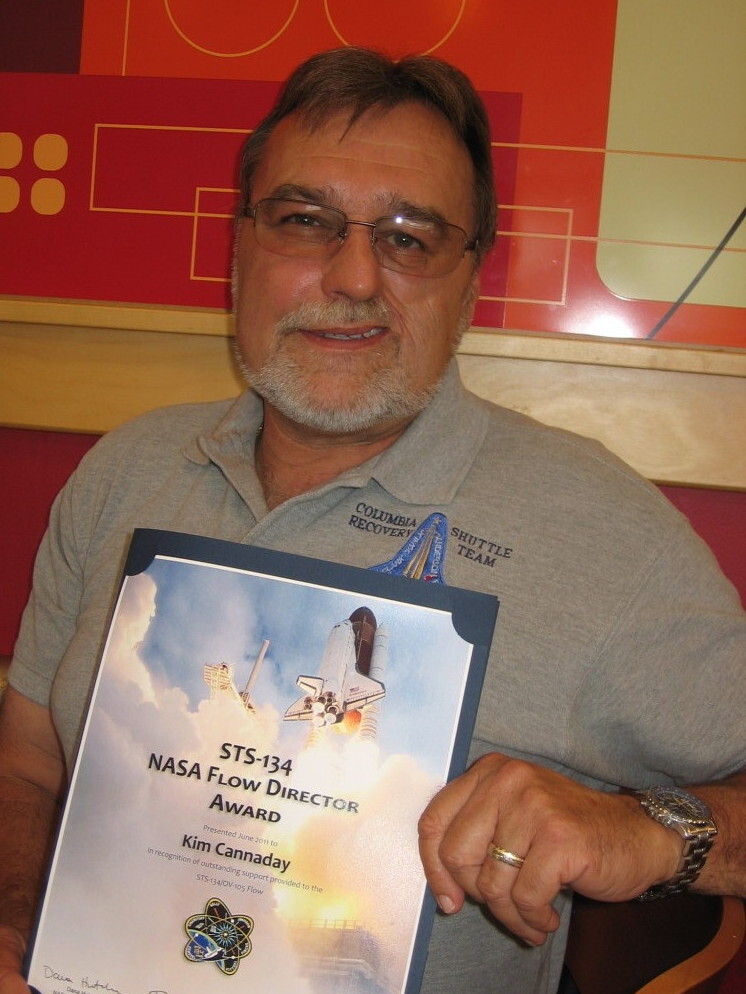 Kim Cannaday shows off a citation he recently received for outstanding work on the shuttle. Cannaday, along with thousands of other who worked on the shuttle, were laid off.

But even as the shuttle ends, many on the Space Coast are optimistic about the region's future.

"I've really enjoyed it," says Kim Cannaday, who has worked for the United Space Alliance, a prime shuttle contractor. "It's been a great career. Some of the best people in the world out there, I'll tell you. Too bad it's coming to an end."

After 23 years, Cannaday was laid off in April.

He's worked on nearly 120 missions as a shuttle technician. He says his first day on the job was after the tragic Challenger disaster and a three-year-long hiatus when the future of the shuttle program was in doubt and many workers were laid off.

Cannaday was one of a whole new crew of technicians hired to prepare the launch of the first shuttle sent back into space, Discovery.

"Oh, it was beautiful. It was really neat," he says. "And when you're out there working, you're closer than just about anybody. When you're there and feel the launch, you feel the vibration and the rumble; the motors come through you as you're standing there."

Along Florida's Space Coast, from Titusville to Melbourne, there are former shuttle workers like Cannaday.

And by the end of the month there will be 2,000 more men and women with families, mortgages and now the challenge of finding a new career.

Cannaday says many of his former co-workers have already found jobs. He's submitted applications with a number of companies, even some out of the area, so far without success.

"I think part of the trouble I'm having right now is that I'm overqualified for some of the jobs out here because they're paying so much less," he says. "And I think the employers might be looking at it like, 'Well, we could hire for these less wages, but if someone else comes along and makes him an offer, then he's going to jump ship.'"

For old-timers here, there's a sense of deja vu. It was nearly 40 years ago when the Apollo program ended and massive layoffs devastated this region's economy.

This time, even though the overall economy is in much worse shape and Florida is still mired in a housing crisis, Lisa Rice says the impact will be far less.

Rice is the president of Brevard Workforce, a jobs agency that serves the area. She says the area and its economy has grown greatly since those days.

Another help: The $40 million the federal government has given the region to prepare for this day.

"We've been in the planning and training and preparing stage for four years now, essentially," she says. "The workers are much better prepared. They've been getting their certifications, they've been getting work, so it's a different day."

Beginning Of A New, Diversified Economy?

Even with the shuttle's demise, thousands of workers are still employed by dozens of aerospace companies working on defense and civil projects that continue to be launched at Cape Canaveral.

More jobs will be added in coming years as private companies developing manned and unmanned vehicles are drawn to the Kennedy Space Center. But those jobs are still years away.

In the meantime, many workers are hiring on with aviation companies that have been drawn to the area, such as Brazilian jet maker Embraer.

There are also jobs in nearby Orlando, which has become a center for biotechnology and the computerized field of modeling and simulation — an emerging industry with applications from entertainment to manufacturing.

In Rockledge, another company is taking the Space Coast in a different direction: designing and manufacturing a new type of car called the Rivian.

R.J. Scaringe is the 28-year-old CEO of a start-up car company. At the company's headquarters, he shows off what he calls Rivian's launch vehicle: a sleek sports car he expects to have on the road by the end of 2013.

"As you can see, it's a two-plus-two configuration, so a four-passenger vehicle set up with rear wheel drive, mid-engine," he says. "So really, truly a performance vehicle. Very aggressive looks in terms of the styling. We tried to go for a look that gets you excited looking at it."

Scaringe says it was built not just for style and performance, but also with fuel efficiency in mind. This model gets more than 60 miles per gallon and will be priced as he says, in the mid-$20,000 range.

Scaringe grew up in this area. His father is an engineer whose company developed refrigeration units used on the space shuttle. He's planning not just to design, but also to manufacture his car here on the Space Coast. One reason, he says, is the available pool of experienced workers.

"There's just a mountain of very talented, very capable technicians, engineers we can tap into, particularly on the manufacturing side," he says.

Eventually, Scaringe says he may have more than 1,200 workers on site, plus those working for contractors and suppliers.

It's the kind of emerging business that gives workers and officials on the Space Coast hope that the end of the shuttle may mark the beginning of a new, diversified economy.