Accessibility links
Popularity Of Drones Soars For Many Countries Roughly 50 countries are now developing and producing the unmanned aircraft for both surveillance and strikes, shifting the balance in the skies. And increasingly, they're being used to replace troops on the ground, which raises issues about the ethics and legality of striking with a high level of ease. 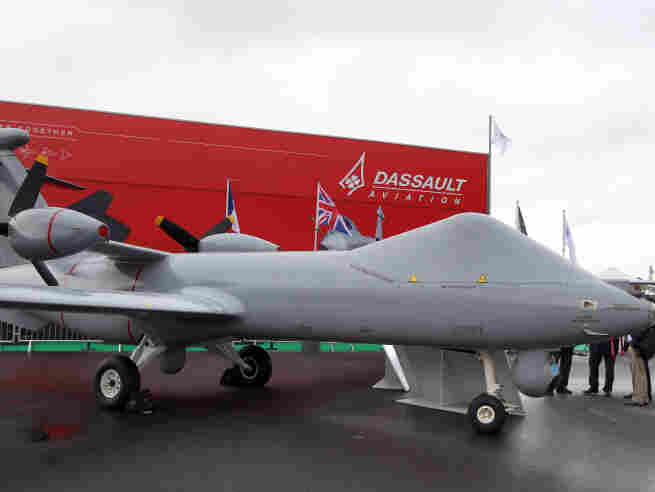 A model of a surveillance drone by the French Dassault Aviation and the British BAE Systems is on display at the International Paris Air Show in June. Pierre Verdy/AFP/Getty Images hide caption 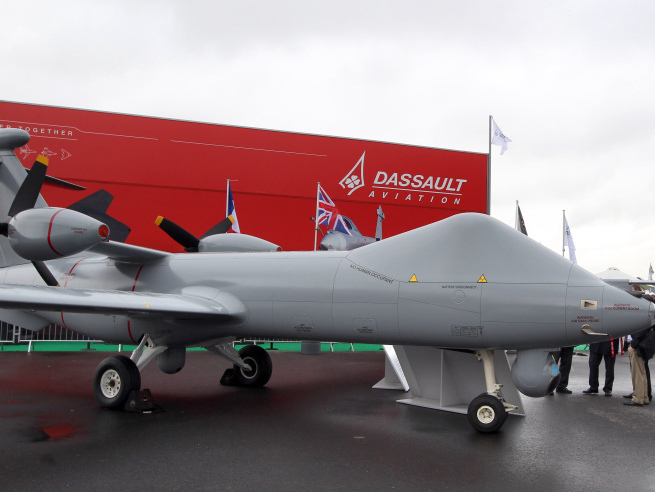 A model of a surveillance drone by the French Dassault Aviation and the British BAE Systems is on display at the International Paris Air Show in June.

As the U.S. begins withdrawing ground troops from Afghanistan and Iraq, it is increasingly depending on unmanned aerial vehicles to track and kill suspected terrorists and other enemies. That has pushed production of the weaponized drones to new levels.

But remotely controlled aircraft, especially the type used for surveillance, are becoming ubiquitous throughout the world, says Peter Singer, author of Wired for War.

"We're seeing everything from teeny tiny ones that are the size of bugs," he says. "I actually call them bugs with bugs because they're this little robot the size of insects, they're designed for spying, like James Bond bugs." Singer says at the other end of the spectrum are drones with wingspans the length of a football field.

Singer, the director of the 21st Century Defense Initiative at the Brookings Institution, says the drones are designed for jobs that humans can't or don't want to do. He calls them the 3Ds. Dull: A drone can watch empty desert sand for 24 hours at a stretch. Dirty: Unmanned aircraft can hover above a nuclear power plant leaking radioactive material.

"And most importantly is Dangerous: You can send them out on missions that mean that it might get shot down, it might get blown up, and you don't have to worry about the pilot being captured," he says.

That is why drones equipped with missiles or bombs have become so valuable to the U.S. over the past few years. They're used by the military and the CIA to track, and sometimes kill, terrorism suspects in Somalia, Yemen, Libya, Iraq, Afghanistan and Pakistan.

Retired Lt. Gen. David Deptula led the U.S. Air Force's drone program from 2006-2010. He says the remotely piloted aircraft have had a significant impact. They've dramatically reduced the amount of time it takes to find a target, watch it, and then if needed, take it out. Deptula says the drones are likely the most precise weapon in the U.S. military's arsenal.

"Statistically over 95 percent of all the weapons released by the predator hit exactly what they're aimed for," Deptula says. Those that fall into the other 5 percent, he says, are either caused by "some mechanical malfunction or a last-minute movement of the target location."

There have been some high-profile misses involving collateral damage in Pakistan and Afghanistan. But Christine Fair, an assistant professor at Georgetown University, says there's a misperception that drones are firing off weapons indiscriminately. She says there are many people involved in the surveillance part of the operation before a weapon is fired.

"You have lawyers, you have targeteers, you have intelligence operatives, you actually have pilots who are manning the drones. These are not 14-year-old kids right out of basic training, playing around with a joy stick," she says.

But there are lingering questions about the authority to carry out targeted killings with drones, and whether the operations adhere to the Geneva Conventions and the laws of war.

This idea that somehow this technology is allowing us to kill in more places and ... aim at more targets is for me the fundamental ethical and legal problem.

Mary Ellen O'Connell, a professor of international law at Notre Dame University, says there is a risk the U.S. is using more force than is lawfully warranted just because the new technology makes it easy.

"I think this idea that somehow this technology is allowing us to kill in more places and ... aim at more targets is for me the fundamental ethical and legal problem," she says.

The demand for drones is enormous, and not just for the U.S. Roughly 50 countries are now developing and producing the unmanned aircraft for both surveillance and strikes.

Deptula, the former head of the Air Force's drone program, says the Pentagon needs to be thinking about the future. He says that until now, American drones have been allowed to freely roam the skies with no opposition. Deptula says that could change.

"To date, we haven't been faced with an adversary that has 10, 20, 100 or 1,000 remotely piloted aircraft that are now commingling with friendly forces. How do you deal with those kinds of air defense situations?" he says.

Deptula says military planners need to think of all the new potential scenarios as the popularity of drones continues to soar.