Accessibility links
How I Met Your Zookeeper: Advertisers Fling New Ads At Old Reruns The digital insertion of new advertising in the background of syndicated reruns has never looked sillier than on How I Met Your Mother. How, after all, does a reminiscence from 2007 include a movie from 2011?

How I Met Your Zookeeper: Advertisers Fling New Ads At Old Reruns

How I Met Your Zookeeper: Advertisers Fling New Ads At Old Reruns 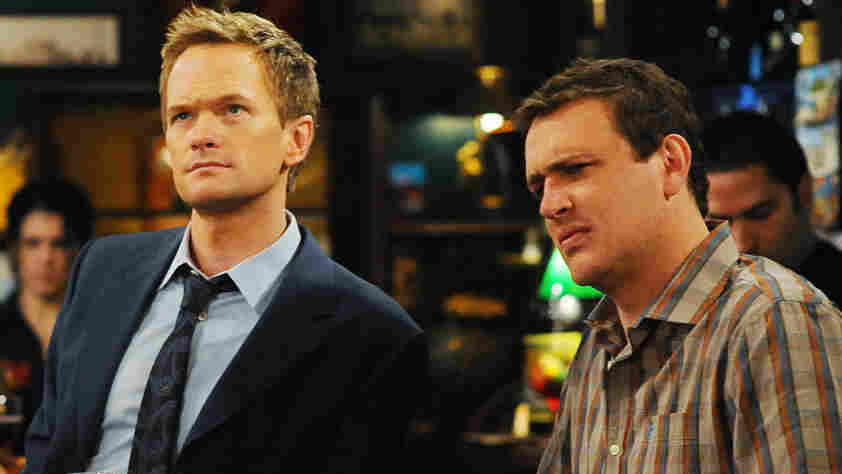 Neil Patrick Harris and Jason Segel appear in this (unaltered) image of an episode of How I Met Your Mother. If you saw it as a rerun, perhaps right over their heads, there would be a great big TV advertising a new film. Look at all the blank space! Ron P. Jaffe/AP hide caption 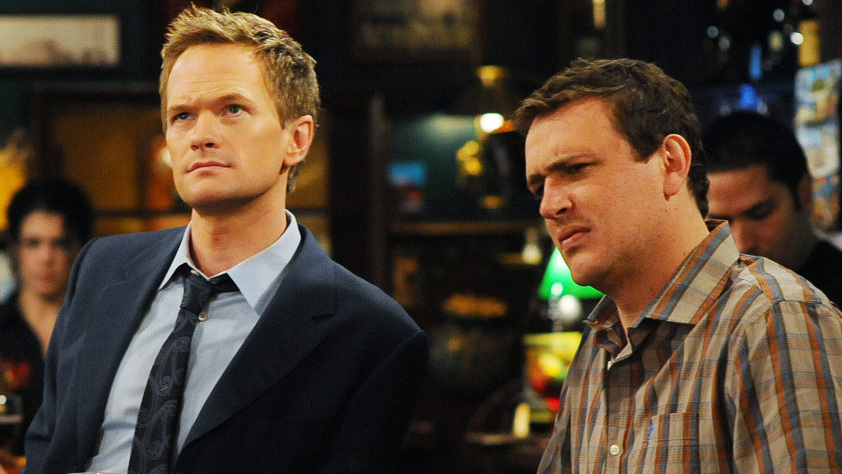 Neil Patrick Harris and Jason Segel appear in this (unaltered) image of an episode of How I Met Your Mother. If you saw it as a rerun, perhaps right over their heads, there would be a great big TV advertising a new film. Look at all the blank space!

As you may have heard, there was a recent calling-out of both Zookeeper and How I Met Your Mother as a result of an ad for the former being digitally inserted into a syndicated rerun of the latter. The general practice isn't new, but there's something about this particular example that's especially irksome, and not just because it's been done in the service of a Kevin James talking-gorilla movie.

First, though, let me indulge in the harrumphy (but obligatory) finger-waggle that the entire practice of treating every inch of the television screen as a revenue opportunity regardless of whether those pixels/lines/electrons/Lite Brite pegs are already occupied is galling. Yes, yes: programming exists primarily to support commercials and not vice versa, and the increasing use of technologies like DVRs is forcing advertisers to be more creative and/or aggressive.

Stop and think, though: Is there any other creative product in which this practice would be acceptable? This isn't simple product placement; it's altering a work that has been completed and published. Imagine turning to page 46 of a book and finding a sticker praising Pepsi covering a passage about the protagonist wondering about whether he would get tenure. Or purchasing a song on iTunes only to discover that a five-second Wal-Mart jingle had been recorded in the short instrumental break between the chorus and the next verse. (If they didn't want advertising there, why didn't they include any singing?) Harrumphing accomplished!

But even if we sigh and resign ourselves to never again having another surface that somebody, somewhere won't see as empty billboard space, the Zookeeper incident goes well beyond, say, layering a fake package of Oreos onto a table next to Ross Geller. Oreos exist within the world of Friends, even if, I should point out, Ross would by necessity be pretending that they don't right at that moment.

Mother is an odd choice for in-program insertions, though. It's not simply that the episode the much-debated screenshots come from ("Moving Day") originally aired in 2007. More than most sitcoms, Mother has a rather explicit time frame. How explicit? Well, the very first line of the episode is, "Kids, in the spring of 2007..." So it's not an ideal candidate to layer in an advertisement for a movie released in July 2011, is what I'm saying.

Worse still, inserting Zookeeper into the reality of Mother seems wholly counterproductive. There's an excellent chance that you didn't even know about the incident until you read it on The Consumerist, or Vulture, or The Hollywood Reporter, or right here about 90 seconds ago. Galling as the ad is, it was tucked politely into the background in such a way as to not call overmuch attention to itself. It was so unobtrusive, in fact, that in order for the ad to work, you already have to know that it's an ad for Zookeeper. Otherwise, you won't even see it.

So there you have it: an advertising practice designed for maximum obnoxiousness and deployed for minimal effectiveness, making it pointless (and thus even more obnoxious). Though it should be acknowledged that folks like me are talking about it right now, so asterisk the "pointless" and multiply the "obnoxious" by a factor of ten.

Unless, of course, the aim of including a reference to a movie from 2011 in a story taking place four years earlier is actually a commentary on Grown-Up Ted Mosby being a far more unreliable narrator than is usually assumed. If that was the case, then the ad was brilliant. But they'd have to sell that a lot harder before I buy it.