Accessibility links
If Women Ruled The World, Would Debt Be Less? Women were often the first to sound the alarm ahead of a financial crisis, says host Michel Martin. Now, as the U.S. struggles to make a critical decision about the deficit, she wonders why so few women are at the negotiating table while the seats are filled with the very people who created the problem. 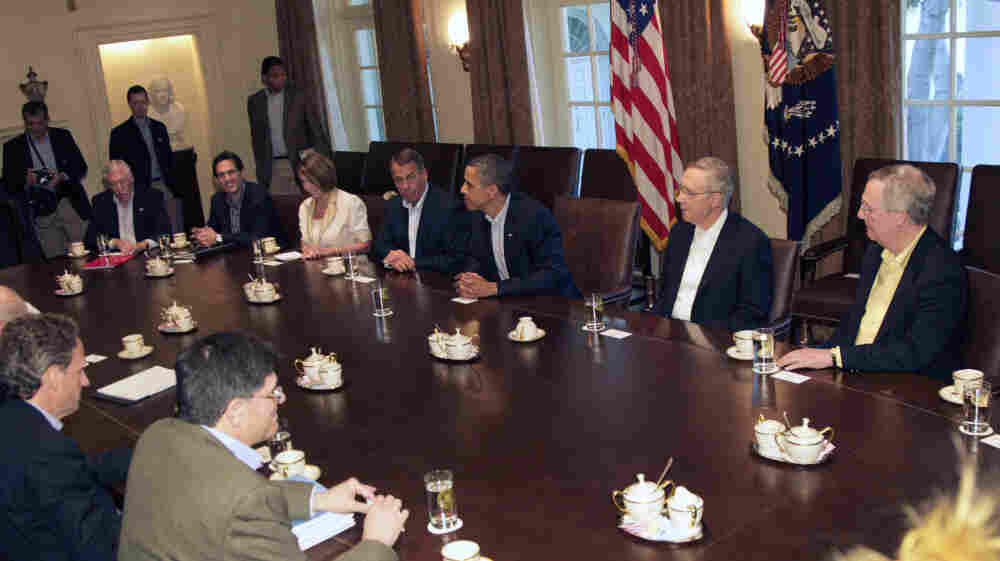 President Obama meets with congressional leadership in the Cabinet Room of the White House on Sunday to discuss the debt. Carolyn Kaster/AP hide caption 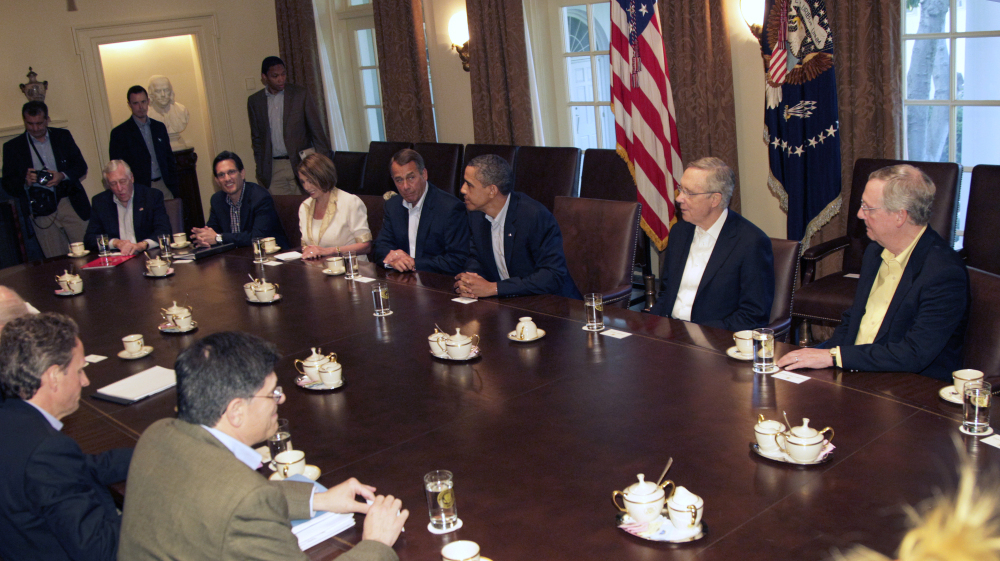 President Obama meets with congressional leadership in the Cabinet Room of the White House on Sunday to discuss the debt.

I didn't want to bite my nails all weekend waiting for the congressional leaders and the president to agree on a plan to raise the debt ceiling and reduce the federal debt.

So I did the next best thing — watched the Harry Potter marathon. And yes, I am getting ready for the big U.S. premiere this week. And no, I have not seen the new one yet. My hookups don't run that deep. Trust me, if they did, I would have been there.

But while I was watching the previous films, I was thinking our political wizards could catch a clue from the Potter gang. They could listen to Hermione once in a while, which is to say, they could let some women in the room.

It's a stereotype that women are more reasonable than men, more moderate than men, nicer than men. I know that's not true.

Being here in D.C., I've met more than my share of narcissistic, blowhard female politicians, and I've met many men who listen well and don't care who gets the credit, as long as the job gets done.

But I will say, first of all, it is amazing to me that during what could be one of the most important decision points in recent U.S. history, there are so few women with a seat at the table.

Sure, House Democratic leader Nancy Pelosi was there on Sunday night. But is that really enough? Half the population gets to be represented by one voice?

Can I just tell you? Is it a coincidence that in this financial crisis, as in past ones, women were often the people sounding the alarm before anyone else was?

First there was Sherron Watkins, who tried to blow the whistle on the shady accounting practices at Enron long before regulators and the public caught on. More recently, there was former Federal Deposit Insurance Corp. head Sheila Bair, who raised questions about subprime mortgages when few others did. Or women like June O'Neill, the former director of the Congressional Budget Office.

These women had the right idea. What they lacked was the power and the allies to allow their point of view to prevail.

I would also ask, is it a coincidence that some of the countries with the most serious and intractable budget woes in Europe right now are countries where female participation in government is minimal or degraded? Like Greece, where just over 17 percent of the Parliament are women? Or Italy, where just over 20 percent are, and where the prime minister evidently thinks the most important roles for women in his country involve taking their shirts off in public and cavorting with him in private at parties where the favors are alleged to involve something other than goodie bags?

Although many of the headline-grabbing potential candidates for president have been women in recent years — Secretary of State Hillary Clinton on the Democratic side three years ago and Sarah Palin and Michele Bachmann on the Republican side now — Clinton has made it clear she is done with campaigning. And it remains to be seen whether Palin or Bachmann will ever have an impact on governance equal to her impact as a media figure.

This raises the question, just what do women bring to the table when it comes to difficult negotiations? It is tough to say, and many people have tried. Is it that women are socialized to listen more and talk less? Is it that they are more willing to sublimate their own egos for the sake of the greater good?

I do know that something is wrong when our economic future is at stake, and the only people who get to sit at the table to talk about it are the very people who messed things up to this point.