Accessibility links
A Conservative Spins Out The GOP's Debt Endgame Longtime GOP budget committee aide Steve Bell talks about how the debt ceiling standoff might end — and how his party could fare politically. It won't be pretty.

A Conservative Spins Out The GOP's Debt Endgame

A Conservative Spins Out The GOP's Debt Endgame

But he also suggests that his party may pay the price at the ballot box next year for its insistence on protecting tax cuts for the nation's highest earners. 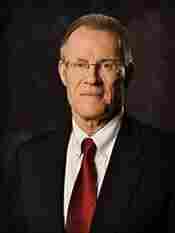 Bell, who served many years on the staff of Sen. Pete Domenci (R-NM), including a stint as staff director of the Senate Budget Committee, now heads the Economic Policy Project at the Bipartisan Policy Center in Washington. He also spent a decade as a managing director with the Wall Street investment bank then known as Salomon Brothers.

In an interview with NPR, Bell talked about the economic realities he believes the nation will face if Congress fails to raise the debt ceiling. And he argues that Obama has appeared to be the "adult parent" in the negotiations. Excerpts:

Liz Halloran: Republicans have been citing polls that show Americans are not convinced that raising the debt ceiling is an imperative. The president says he believes that if the question were asked differently he could get a majority to say it is. What does seem undeniable is that Americans are, frankly, bewildered. So let's start with this: Do you believe that increasing the nation's borrowing capacity by the Aug. 2 deadline is an economic imperative, and why?

Steve Bell: Absolutely. Here's one example: We have 1.9 million government civilian employees. Our analysis has found that in the absence of a debt ceiling increase, more than half will lose their jobs overnight. That money is money you can stop paying. What is happening in Minnesota will happen here in spades. This is not a disagreement like last year's debate about the continuing resolution to keep government running. When the United States government issues all this debt, people trust it. They believe it's going to be paid back on time and in full. That reliability means they consider our debt the most riskless thing they can invest in. By not doing a debt increase, or doing it badly, it looks like we won't be as reliable in the future. There will be higher interest rates; it will cost the country jobs and prolong the recession.

More On The Debt-Ceiling Debate

Halloran: The path to a debt-limit-and-budget deal appears blocked, at this point. House Speaker John Boehner has not been able to persuade his caucus to move with him on a White House-backed plan that would reduce the deficit by $4 trillion over 10 years with spending cuts, including those to entitlement programs, and rolling back Bush-era tax cuts for the wealthy. How do you envision the endgame for Republicans who continue to oppose what many conservatives see as a surprisingly good deal?

Bell: I'm a conservative. I'm a fiscal and defense conservative. I am astonished that federal politicians who must know what this will mean to their districts are still saying that if they don't get exactly what they want, it's OK what happens to their districts. They are not being conservative. They are almost being theological, led by Pennsylvania Sen. Pat Toomey and Congressman Jim Jordan [R-OH], head of the Republican Study Committee. Both of them understand what a failure to increase the debt ceiling would mean. Both of them say short-term pain is OK for long-term gain. That's a false choice. There is no long-term gain. Either we'll have a short-term gain, or medium-term catastrophe.

Halloran: So what do you see as the best endgame or outcome for Republicans?

Bell: A mediocre deal, pass the debt ceiling and change the subject. There will be some action on tax loopholes, and about $2.4 billion in easily identifiable cuts — from troop reductions, defense cuts, minor changes in agriculture subsidies, a freeze in nondefense discretionary spending. But tax cuts? Not now. That means that next year we will have another continuing resolution, and continued debate.

Halloran: Democrats have been pounding Republican leaders for "giving up" on deal negotiations. And about the outsize power of the 87 GOP Tea Party freshmen Boehner has to corral, along with House Leader Eric Cantor, who has taken a much harder line on negotiations. Given your experience on the Hill, negotiating tough budget compromises, how does this compare with struggles past?

Bell: Bill Clinton isn't president. Pete Domenici isn't chairman of the budget committee. Bob Dole or Bill Frist aren't the majority leaders. And that makes all the difference. I've worked for Domenici off and on for 40 years. He would go to the caucuses after discussing things with the majority. He would say, "Look, this is where we are economically; this is where we are on fiscal policy; here's what we need to do." And they would talk it out. It comes down to individual leadership. Clinton in the 1990s was battered, impeached by the House, facing trial in the Senate. It may have taken a long time, but he and Republicans got a deal that led to the last four balanced budgets.

I think the president's played it very well. His press conference was a damn masterpiece. When your enemy is tying a noose, leave them alone.

Halloran: Why does that seem so impossible now?

Bell: Members of Congress are afraid of being challenged in primaries. In 2001, redistricting made fewer and fewer seats competitive between the parties. So now candidates have to hew more to the party line, and the more extreme party members who vote in primaries. Leaders in the past came from areas not locked up by Republicans, or Democrats. They had to balance their decisions, and they won more elections that way. But there now is also an anger that has resulted from the huge and growing gap between the top 2 percent in the country, and the other 98 percent. Things that are happening right now are really bothering people. They see what is happening to the truly wealthy in this country. Not the teachers, the engineers, the hospital nurses. It's people who are doing weird things in banks and investment firms. That anger feeds the notion that whatever they're doing in Washington is wrong — what else are they going to say? They can't change Wall Street, or Hollywood. That's also why politicians are more afraid of primaries.

Halloran: We started out talking about the economic imperative of a debt ceiling deal before the Aug. 2 deadline. What are the political imperatives, for the president, and for Republicans, given the way the debate has played out so far — the continued uncertainty, and the chorus of Republican presidential hopefuls dismissing the deadline as a "scare tactic"?

Bell: I think the president's played it very well. His press conference [Monday] was a damn masterpiece. When your enemy is tying a noose, leave them alone. Republicans have yelled and screamed and carried on. They have a budget they're trying to run away from. All the talk about repealing health care legislation is fading out. And the talk about repeal of Dodd-Frank? Ninety-nine percent of Americans don't know what it is. This is the defining discussion now, and there will be a referendum on it in 2012. If Republicans have to run on a platform of no changes in rich folks' tax cuts, versus Obama saying working men and women are hurting? You don't have to be a genius to figure that one out.