Accessibility links
In Iraq, Panetta Has Tough Words On Troop Deadline During a visit to Baghdad, Secretary of Defense Leon Panetta urged the Iraqis to make a decision about whether they want U.S. troops to stay beyond the end of this year. He also said the U.S. is concerned "about Iran and weapons they're providing to extremists here in Iraq." 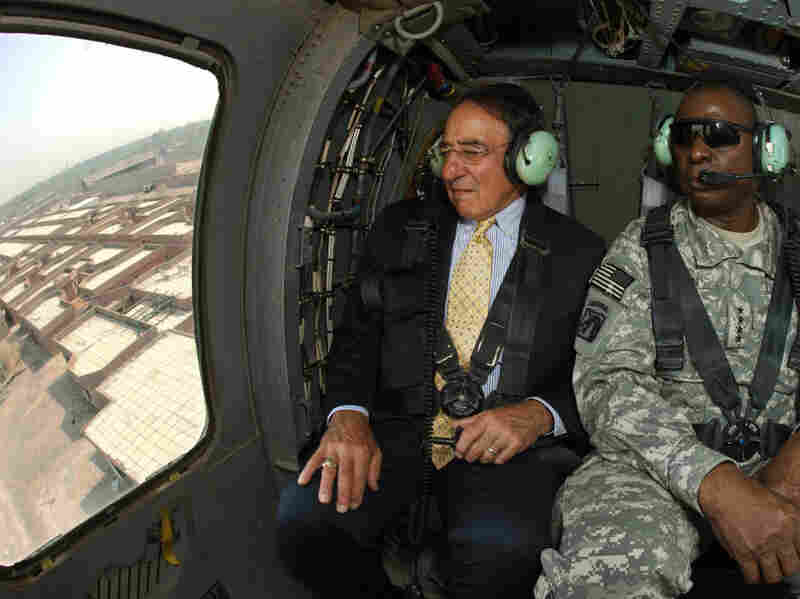 Secretary of Defense Leon Panetta sits with Gen. Lloyd Austin, the top U.S. commander in Iraq, as they fly in a Black Hawk helicopter over Baghdad on Monday. Paul J. Richards/AP hide caption

Secretary of Defense Leon Panetta has been on the job for all of 11 days and he's already frustrated with Iraq.

"I'd like things to move a lot faster here, frankly, in terms of the decision-making process. I'd like them to make a decision, you know: Do they want us to stay? Don't they want us to stay? ... But damn it, make a decision," he said during a visit to Baghdad on Monday following a brief trip to Afghanistan. It's Panetta's first trip to the war zones since assuming his new job last week.

The decision he wants made is about whether U.S. troops will stay in Iraq. All of them are supposed to be out of the country by the end of this year. And it's up to Iraq to ask if it wants the U.S. to stay.

U.S. military officials say the longer it takes Iraq to make up its mind, the more expensive it will be to reverse course.

"It's evident to everyone that when you get into the October-November time frame, you're really taking things apart that are very difficult to put back together," says Gen. Lloyd Austin, the top U.S. commander in Iraq.

U.S. officials say this state of flux puts American troops at risk — because attacks against American forces are increasing as the deadline to leave nears.

U.S. officials are now blaming those attacks — at least in part — on Iran.

"It doesn't have a big sign that says 'made in Iran' on it," says a U.S. military explosives expert showing off some of the munitions apparently used against American troops here. "But from the way the letters are on there, from the shapes and styles, we're able to tell exactly where it came from."

The military experts are talking about something they call IRAMs — or improvised rocket-assisted munitions. U.S. experts say they have traced these weapons to Iranian-backed militant groups.

June was the deadliest month for U.S. troops in Iraq in two years — 15 troops died, nine of them in attacks involving these rocket-propelled bombs.

A U.S. soldier asked Panetta about the Iranian weapons when the secretary visited troops in Baghdad on Monday.

"We're very concerned about Iran and weapons they're providing to extremists here in Iraq," he responded. "And the reality is that we've seen the results of that — in June, we lost a hell of a lot of Americans ... and we cannot just simply stand back and allow this to continue to happen."

Austin, the U.S. commander here, said that cracking down on the militias is a job for the Iraqi government.

"I think the Iraqis have to realize, and I think for the most part they do, that if we are not here, these threats don't go away," he said. "The government's going to have to deal with it."

But Panetta said if the Iraqi government doesn't act, the U.S. will.

On Monday, Iraqi leaders acknowledged the threat from Iranian-backed militias and said they'd work to address it.

As far as any future U.S. troop presence in Iraq, senior U.S. defense officials say, "We are neither pressuring nor pleading, but time is running out for a decision."