Accessibility links
The Problem With A Slow-Growth Economy Although the recession ended two years ago, the economy is still stuck in the mud. Over time, weak growth can have an insidious effect on a country's prospects and options. Why a low growth rate is more than just a number. 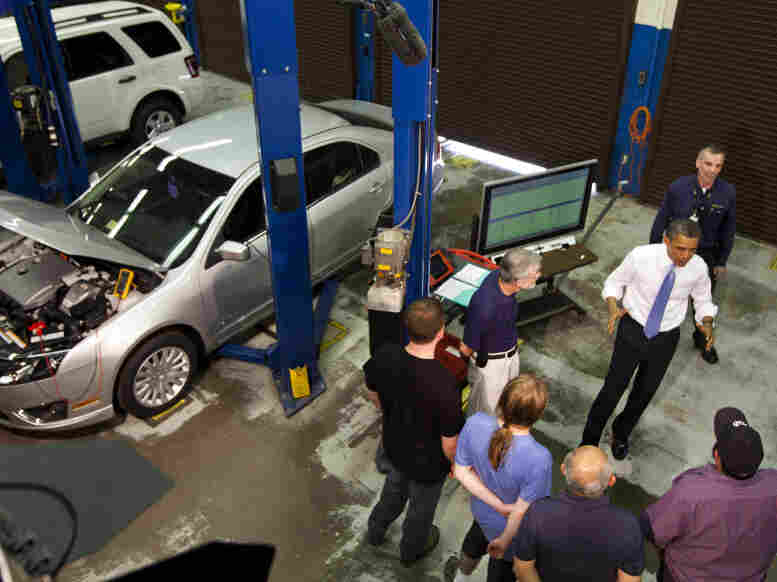 In the United States the recession officially ended two years ago, but in much of the country housing prices are still falling, jobs are hard to come by and growth remains weak.

A low growth rate is much more than just a number. Economists say that over time weak growth can have an insidious effect on a country's prospects and options in ways not everyone appreciates.

This was supposed to be the year the U.S. economy finally gained traction. Instead, it looks more and more like it's stuck in the mud, says former Federal Reserve member Alan Blinder.

"The economy has been disappointing on the low side consistently for several months now and that makes me and other people worry that maybe this slow growth will linger longer than we now think," he says.

During the first three months of the year, the U.S. economy grew by just 1.9 percent while China grew 9.7 percent. Lakshman Achuthan of the Economic Cycle Research Institute says the weak U.S. growth rate is part of a disturbing pattern.

"Ever since the mid-1970s the pace of expansion has been stairstepping down in every expansion so that the last expansion was the weakest expansion on record on every count, including GDP and jobs," he says.

Achuthan says it's not clear why this is happening. It might be demographics, or globalization, or simply an inevitable fact of life for a mature economy.

But when you have a 9 percent unemployment that means you're sitting at the bottom of a deep hole and you need to climb out. Two percent is not climbing out at all. In fact, 2 percent is burrowing in slightly deeper.

Harder For Companies To Grow

But the implications of the weak growth rate are profound. For one thing, it means U.S. companies have fewer opportunities to grow.

Wisconsin-based Husco International, which makes components for hydraulic equipment, has had a rough past few years because many of its customers are in the construction business, says CEO Austin Ramirez.

"It's hard to be optimistic, overly optimistic, about the market," he says. "We'll figure it out and we'll get things under control, and the U.S. housing market will recover. Am I optimistic it's going to happen in the next three months as opposed to the next 18 months? I don't know."

But Husco is doing well in part because it has sought business in emerging markets where growth is much stronger.

"They're just building a lot of infrastructure. You know China is investing a huge amount of infrastructure into roads and bridges and railroads, and to do that they need hydraulic components — same story in India," Ramirez says.

When U.S. companies face weaker growth they do less hiring, which means unemployment is higher. Blinder says a 2 percent growth rate wouldn't matter much if the nation had a healthy job market.

"But when you have a 9 percent unemployment that means you're sitting at the bottom of a deep hole and you need to climb out," he says. "Two percent is not climbing out at all. In fact, 2 percent is burrowing in slightly deeper."

And Blinder says the slow pace of hiring is especially hard on young people trying to enter the workforce.

Difficult For Governments To Repair Finances

Richard White, who heads the Rutgers University career office, says the job market for graduating students is more challenging than it was a few years ago.

White says students graduating right now sometimes have to accept lower salaries and less attractive jobs than they used to. And over time they pay a price for that.

"If you look over the long haul, starting behind — particularly in an economy that is growing much more slowly than we all would hope — they may not catch up over time," he says.

Slow growth also makes it much harder for cities and states to repair their finances. Not only does the cost of safety-net programs stay high, but tax revenues stay low.

But none of this is forever. Achuthan says even with moderate growth the U.S. economy will recover eventually, if given enough time. In the 1990s growth wasn't especially strong, he says, but the expansion lasted a long time, and that eventually brought unemployment down to near-record lows. He says the same thing could happen now.

"Two percent's not bad if you can get 10 years of it," he says. "It's really bad if you only get a couple years of it, and that's the challenge here."

But to achieve that kind of stable, long-term growth means avoiding any further recessions. And that won't be easy. In the meantime, a public that's lived through the booms and busts of the past two decades may have to learn to live with diminished expectations.