Accessibility links
'Sister Wives' Family To Challenge Utah's Anti-Bigamy Law In Federal Court The Brown family has become a reality TV star on the show Sister Wives. Now, the 21-member nuclear family is poised to file a lawsuit in federal court in Utah. The family members say the state's anti-bigamy law is unconstitutional and that the Supreme Court backs them up. 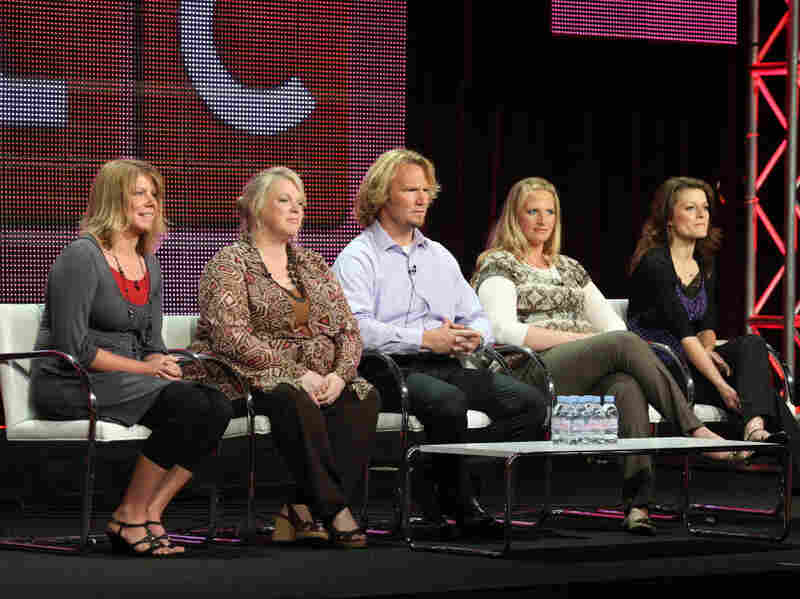 Last summer, members of the Brown family — Meri (from left), Janelle, Kody, Christine and Robyn — spoke to the media as they prepared for the debut of their reality TV show, Sister Wives. Frederick M. Brown/Getty Images hide caption 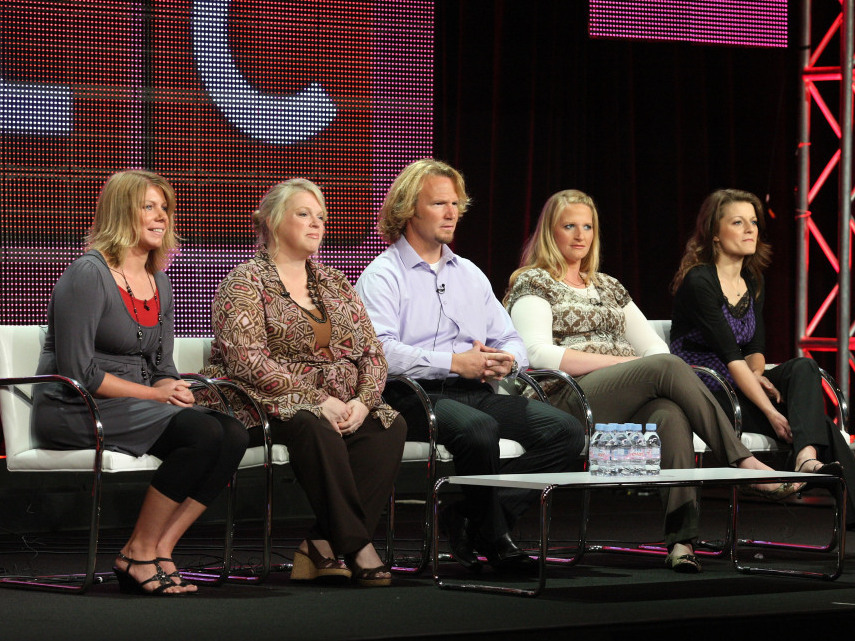 Last summer, members of the Brown family — Meri (from left), Janelle, Kody, Christine and Robyn — spoke to the media as they prepared for the debut of their reality TV show, Sister Wives.

The latest episode in Sister Wives is playing out in the courtroom, not on cable. On Wednesday, the Brown family — the husband, four wives, and 16 children who star in the reality TV show — plans to file a lawsuit in federal court in Utah. The family members say the state's anti-bigamy law is unconstitutional and that Supreme Court precedent backs them up.

Kody Brown and his family made their television debut on Sept. 26, 2010. "I'm a polygamist," said Brown. "But we're not the polygamists you think you know."

Brown and his four wives knew they were taking a risk when they signed the deal with the network TLC. But Robyn Brown, wife No. 4, told viewers they wanted to make a point.

"It's OK for us to live this way, honestly," she said. "I'm sorry — but this is a nation of freedom of choice. We should have this choice, and I want my kids to know that."

Well, it's actually not OK, under Utah law. Kody Brown is legally married to only one wife; the three others are his "spiritual wives." But the law says it's a crime if a married person purports to marry or cohabits with another person. Prosecutors say they'll decide whether to bring charges against the Browns in the next two or three weeks.

In the meantime, the Browns have moved to Nevada and are suing in federal court. Their lawyer, Jonathan Turley, says the state is persecuting model citizens for living out their religious values.

Turley says prosecutors look the other way when it comes to nonpolygamous relationships.

"You can have multiple lovers; you can have adulterous affairs and not be subject to prosecution," he says. "But the minute you refer to her as your spiritual wife, you become a potential criminal defendant."

This isn't about personal rights, says Marci Hamilton. It's about a state's ability to regulate marital relationships. Hamilton, an expert on polygamy law and a professor at Cardozo School of Law, says there is a mountain of evidence that polygamy is bad for women and children. Just do the math, she says: A man who has multiple wives will have to marry younger — often underage — brides as he runs out of women his age.

Hamilton says there have been more than 100 challenges to polygamy laws, including in Utah, and all have failed.

But Turley may have powerful ammunition: the Supreme Court's 2003 decision in Lawrence v. Texas. In that case, the majority ruled that the state could not prosecute people for engaging in private, consensual sexual behavior — in this case, gay sex.

Turley's case is exactly what some have feared — and Justice Antonin Scalia predicted. In his scathing dissent in the Lawrence decision, Scalia said the ruling calls into question any law trying to rein in "immoral and unacceptable" sexual behavior, including "fornication, bigamy, adultery, adult incest, bestiality and obscenity."

"Under this principle, it really is anything goes," says Robert George, who teaches constitutional law at Princeton University.

"State laws to protect public morality by prohibiting what have been regarded as immoral sexual conduct just can't stand constitutional scrutiny," George says. "So, if they accept the logic of their own principles, then Turley is going to win this in a knockdown."

Not so, Hamilton says. Sure, the Supreme Court ruled that private sexual conduct between consenting adults is protected. But, she says, "The court does not say that every activity involving sex is now immune from regulation."

Hamilton doesn't think this case will go very far. But a ruling in Turley's favor would affect tens of thousands of people in polygamous families.