Accessibility links
Rebels In Libya's West Lack Food, Water Over the past few weeks in Libya, the rebels have made substantial gains against forces loyal to Moammar Gadhafi. But the isolated region southwest of Tripoli is now facing major shortages of food and other supplies. 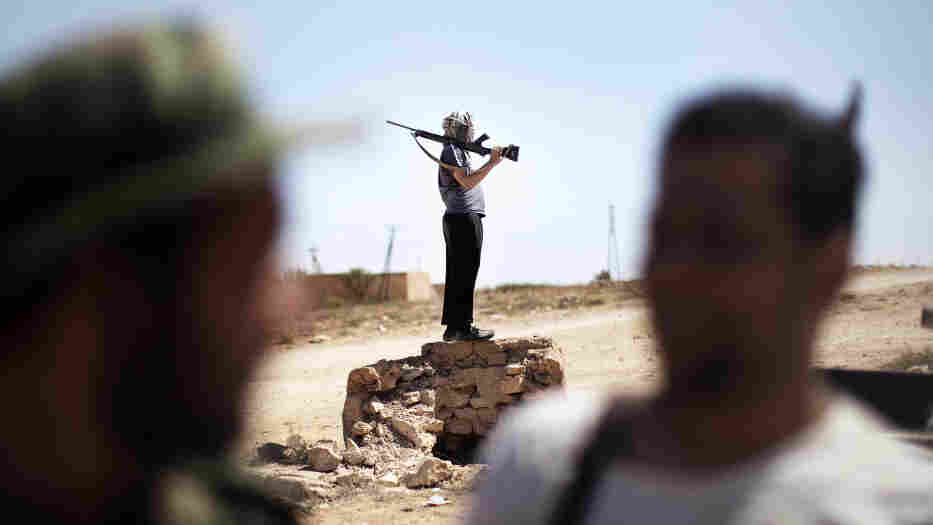 Libyan rebels gather at the front line on the eastern ridge of the Nafusah Mountains in Western Libya on Sunday. Marco Longari/AFP/Getty Images hide caption

Rebels in the Nafusa Mountains of western Libya have made substantial gains in recent weeks against forces loyal to Moammar Gadhafi. But the fighting has prompted a growing humanitarian crisis in this isolated region southwest of Tripoli.

Fighting across Libya has been characterized by a lack of sophisticated weapons. Pointing to a rusted rifle, a fighter on the front line of a recent battle in the mountains said it's "more than 100 years" old. "Our grandfathers before us use it in front of Italian army in 1911," he said.

But Col. Juma Ibrahim, a senior commander of the military council in Zintan, says what he needs most is not guns: "Water, fuel, food, shoes, clothes — many things," he says.

In Zintan and across the western mountains, there is an acute shortage of everything. The only way to bring supplies in is through the border with Tunisia, which until recently was rocketed daily by Gadhafi's army. Government forces are still trying to take it back, and if they do, the mountains will be cut off.

Most supplies now come in on the backs of pickups and in the trunks of cars — a trickle of items supplying a population in the tens of thousands.

Those cars park outside the main mosque in Zintan — a few every day, with the drivers selling whatever they've managed to bring across.

Men crowd around a cluster of lambs ready for the slaughter. Fresh meat is hard to come by, and the bidding is fast and furious. Two of the young ones are going for 200 dinars, or about $130, a fortune in a place where no one has worked for months.

Abdul Hamid Mohammed Mehdi is looking for fresh meat. He does odd jobs to make money, he says, and then takes that cash straight to the market to buy whatever food he can find.

Apart from the lamb seller, there is only one other merchant, and he's selling a few vegetables that are worse for wear after their journey over the mountains in the boiling heat. The tomatoes are mostly rotten, and there is only a small cache of fresh fruit.

Mohammed says his family mostly survives on pasta and other dried or canned foodstuffs. A typical dinner is rice and, if they are lucky, some watermelon, he says.

But he doesn't buy the pasta and rice in a shop because most are closed. The World Food Program and other humanitarian groups are providing food aid. But it simply isn't enough.

At a warehouse on the edge of town, workers load bundles on the back of a large flatbed truck.

Mohammed used to work at an oil company, but now he's coordinating food distribution. He lists what he has in stock: macaroni, oil, tomato sauce.

As supplies come in, they get sent out into the neighborhoods, and what they get depends on the size of the family.

The deliveries of aid aren't regular, Mohammed says. Sometimes nothing comes in for weeks, and what they get is potluck.

The problem is that there are too many mouths to feed, he says. Zintan has become a hub: Fighters are congregating here, as are refugees from other areas, plus the local population already in residence.

"We are suffering from an extremely serious food crisis here," Mohammed says.

Drinking water is also in short supply in many areas, as is medicine.

At a pharmacy in Zintan, a man walks in and asks for Panadol, a brand of painkiller.

He says he hasn't been able to get stocks in since the uprising began; he's just selling whatever he has left. People with serious illnesses — diabetes, high blood pressure — aren't finding the medications they need, he says. "We have nothing," he says.

And the fuel pumps aren't working, either. Fuel is also brought in on the backs of pickup trucks — in large 100-liter plastic containers.

It's sold for 50 dinars for 20 liters — a tenfold price increase since the rebellion began. As a result, most people can't afford to use their cars.

Mohammed Barka, a fuel seller, says he goes to get the gasoline in Tunisia. But sometimes he has to wait for days to fill up because there's no fuel in the border town at the other end.

When he finally gets what he needs, he has to make the treacherous border crossing back with what he says is a mobile bomb. He is constantly terrified that the car will explode.

"But at least we can bring in some supplies," he says. "If the border gets closed off, we will all die."