Accessibility links
Identity Politics: A Brief History The Tequila Party isn't the first organization formed to advance the politics of a specific racial or ethnic group. Did others succeed?

The Tequila Party isn't the first organization formed to advance the politics of a specific racial or ethnic group. Here's a look at how other efforts have fared.

Formed in 1964 by civil rights activists to desegregate the Mississippi Democratic Party and the all-white delegation it sent to the Democratic National Convention that year.

The so-called Freedom Democrats elected their own delegates and sent them to the convention too. Group members, including activist Fannie Lou Hamer, testified before the DNC's credentials committee about the violence, threats and overall discrimination they faced. (Her remarks became legendary: "I am sick and tired of being sick and tired.")

The effort put pressure on President Lyndon B. Johnson, who needed the South — and the support of black leaders — for his re-election bid. Johnson offered the Freedom Democrats two seats in the delegation in exchange for the political support of the Rev. Martin Luther King Jr. and his organization, the Southern Christian Leadership Conference. But the Freedom Democrats rejected the deal because their two seats would have no voting power.

By some historical accounts, their refusal to take the seats amounted to a failure and later encouraged the rise of the more radical black power movement.

However, there's plenty of evidence that the Freedom Democrats succeeded. Their depiction of voter disenfranchisement and intimidation in Mississippi gained national sympathy that helped paved the way for the 1965 passage of the Voting Rights Act.

Established in Texas in 1970 as a third political party devoted to advancing the agenda of Mexican-Americans and later all Latinos. Founders included prominent activists Jose Angel Gutierrez and Mario Compean, who also established the Mexican American Youth Organization — which became the strongest political and social organization for young Chicanos in Texas during the 1970s.

La Raza achieved early success by running handpicked candidates and winning local elections in south Texas, taking advantage of the significant populations of Hispanics in those rural areas. In 1971, it expanded to a statewide party and ran candidates for governor and the state Legislature in 1972 and 1974.

But none of the party's candidates won outside its south Texas political base, partly because they struggled to attract support in the larger cities in which most Hispanics lived.

The party had built its statewide chances around its 1972 gubernatorial candidate, Ramsey Muniz, who had been the first Hispanic to appear on a general election ballot. He received more than 214,000 votes (6 percent) in the contest and, at age 29, appeared to be headed for a promising political career. He ran again in 1974 and garnered 94,000 votes.

Muniz helped organize La Raza Unida chapters in New Mexico, Arizona, Colorado and other states. As he worked to expand the party, he was arrested in 1976 and later convicted of felony drug charges. His downfall effectively dismantled La Raza Unida's political apparatus. It received its death blow in 1978, when it lost state funds for holding its primary elections.

Its first gathering, in 1972, excluded whites — drawing criticism from the pro-integration NAACP — and set an agenda for black political and economic empowerment. Participants included both mainstream and militant activists, including the Rev. Jesse L. Jackson and the widows of the Rev. Martin Luther King Jr. and Malcolm X, as well as black elected officials. 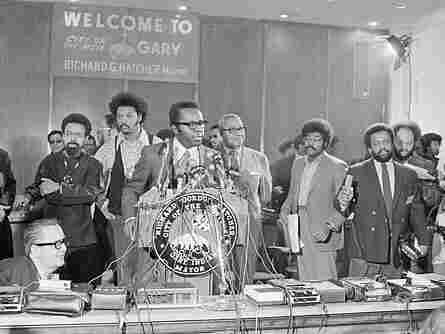 The primary goal was the election of more blacks to local offices and Congress. The convention's platform included a wide range of policies, from the controversial recognition of a Palestinian homeland to other issues that resonate today — local control of public schools and national health insurance.

The convention is credited with helping to register black voters and identifying and supporting black candidates. At the same time, white flight was increasing black populations in big cities, especially in the north. A year after the convention's first meeting, six cities elected their first black mayors, including Atlanta; Detroit; Raleigh, N.C.; and Los Angeles. In the next few years, other cities followed, such as Birmingham, Ala., where the civil rights movement began in earnest; Washington, D.C.; New Orleans; and Richmond, Va., the former capital of the Confederacy.

Black mayors and school board members helped push through some of the convention's key platforms planks, such as school busing, and brought them into the policy mainstream. But by the late 1970s, the already loose coalition splintered.