Accessibility links
Expat Pair Among Libyan Rebels Fighting For Zawiya Rebel commanders say one of their objectives is the city of Zawiya, the site of a major oil refinery. But for some fighters, the battle is about much more than a refinery. The rebel force includes many who were chased out of the city by Gadhafi's forces, as well as a father and son who traveled from Pennsylvania. 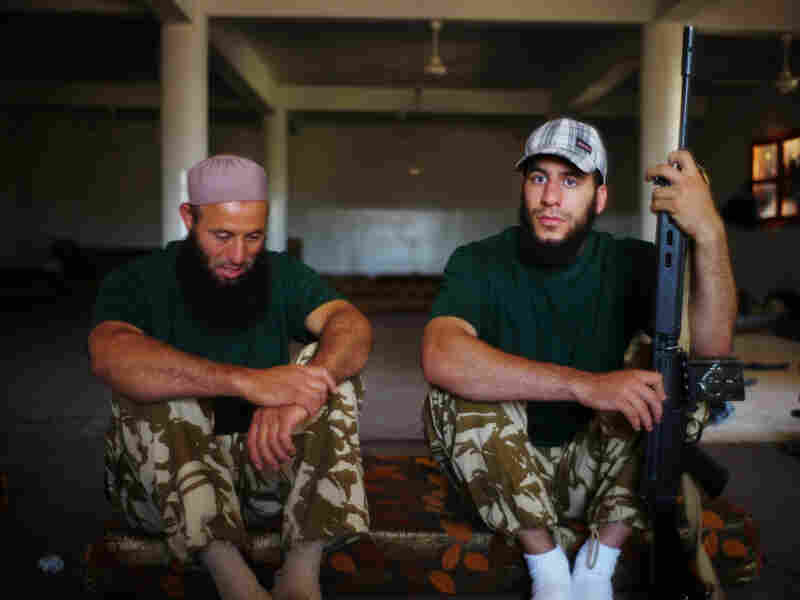 Mabruk Eshnuk (left) and his son Malik left their home in Pittsburgh to volunteer and fight with rebels in western Libya's Nafusa Mountains. Ayman Oghanna for NPR hide caption

Rebel commanders say one of their objectives is the city of Zawiya near the Mediterranean coast, the site of a major oil refinery. But for some rebel fighters, the battle for Zawiya is about much more than a refinery.

In the boiling sun, at a dusty concrete factory that is littered with shrapnel, members of the Zawiya Brigade are holding the line. Zawiya was one of the first cities to rise up against the Libyan regime, but because it is located so close to the capital, Tripoli, the rebellion was brutally crushed. Many who fought there ended up fleeing.

Some of them made it to the western mountains; about 300 to 400 formed a fighting force focused on regaining the city. They've been joined by expatriate Libyans — a father and son who have traveled from Pittsburgh to fight.

About 1 1/2 miles from the Gadhafi front lines, Grad rockets target the rebels at the last position the fighters hold on the road to Zawiya. Three rebels were injured Monday.

But the conflict, at least on this end, is at a stalemate. For now, neither side is advancing.

Mustafa Ismael sits in the shade. His face is lacquered in sweat. When asked what he's doing here, he makes a throat-slitting gesture, saying he wants to kill Gadhafi.

Ismael belongs to the Zawiya Brigade, which is manning this final rebel position near the town of Bir al-Ghanem, about 30 miles into the desert from coastal Zawiya.

Ismael says the brigade wasn't an organized thing — they all just ended up in the mountains and formed the group.

At the Zawiya Brigade's base in Zintan — basically a house where they can sleep and get a shower away from the front — the father-and-son pair from Pennsylvania has just returned from training.

Malik Eshnuk, 21, is wearing a baseball cap and military fatigues.

"It wasn't really much of a decision," says the chemical engineering student. "It's the summertime, and [when] we saw that ... it's going to be a long war possibly, and there's still something we can do to help, we said, 'We are going to go.' "

Malik's father, Mabruk, originally hails from Zawiya. He left when he was 18, eventually settling in the United States and marrying. He became an imam and taught Islam in state penitentiaries in Pennsylvania. He got a real estate business going.

Six of the brothers he left behind, though, still lived in Zawiya. They all took part in the uprising.

About two weeks into the rebellion, Mabruk received a call from Libya with terrible news: One of his brother's sons had been killed.

Then another brother and his sons were arrested. The rest of the men in Mabruk's family fled Zawiya.

Malik says the death of his cousin, who was his age, hit him hard. They had become close after Malik spent the summer in Libya a few years ago.

At the time, he wasn't impressed with Libyan youth.

"I thought they were like bums. They stay in the streets; they smoke; they put gel in their hair. And that's all they care about," he says. "I didn't know they had it in their hearts to stand up and be brave and risk their lives ... for a just cause like this."

After the death of Malik's cousin, the family convened in Pittsburgh. There were discussions over weeks about who would go to fight in Libya. All the children, Mabruk says, wanted to come.

In the end, Malik, as the middle son, was allowed to go with his father. They bought equipment, flak jackets, a satellite phone — all confiscated in Tunisia.

They have been here for about five days, and Malik is having trouble understanding and speaking Arabic. He misses having an Internet connection.

Mabruk is worried about his family at home. But they say they will stay and fight.

"If I can help participate and fight and free Zawiya, I'd be very happy to do that," Malik says. "It would be a dream come true."