Accessibility links
Poppy Crops Set To Bloom If Afghanistan Aid Withers Afghanistan produces most of the world's opium poppy. As foreign aid money starts to shrink, the drug money may overwhelm attempts at a legitimate economy. 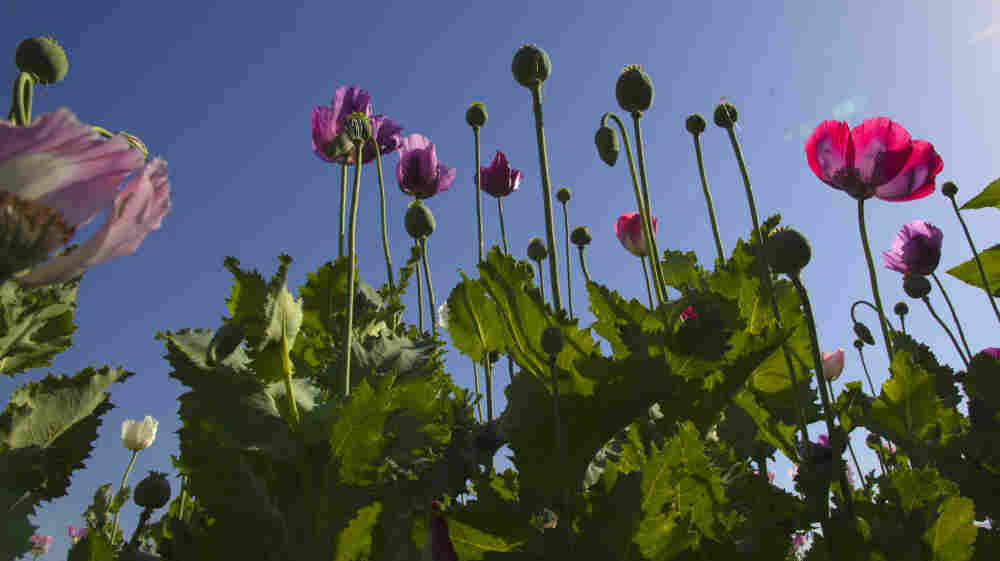 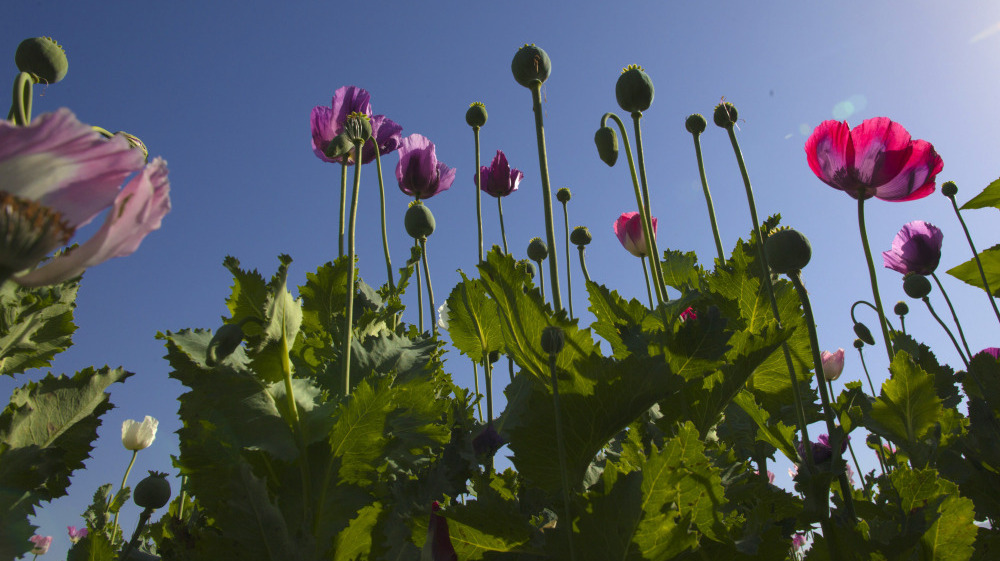 Poppies grow in the city of Fayzabad in Afghanistan.

In case you missed it, June 26 was the International Day against Drug Abuse and Illicit Trafficking. Afghanistan, the world's largest provider of opium poppy, did mark the occasion — with a bonfire.

Standing near an 11-ton mountain of seized opium, hashish and alcohol on the outskirts of Kabul, Gen. Baz Mohammad Ahmadi welcomed officials to the drug-burning ceremony.

Ahmadi, the country's deputy minister for counternarcotics, appealed for a strong international effort against narcotrafficking. He also asked for more cooperation from his own government on the issue.

Afghanistan's opium poppy turns up as heroin in cities across the world. It pumps billions of dollars into the Afghan economy and is rivaled only by the billions that come in as foreign aid money. As that aid money starts to shrink, the drug money may overwhelm attempts at a legitimate economy.

Ahmadi's plea comes after years of inconsistent policy in the international community. Past years saw an aggressive campaign to eradicate opium poppy, but more recently, efforts slowed down to keep from driving poor farmers into the arms of the Taliban. These days, many farmers decide year by year whether to grow poppy or legal crops. 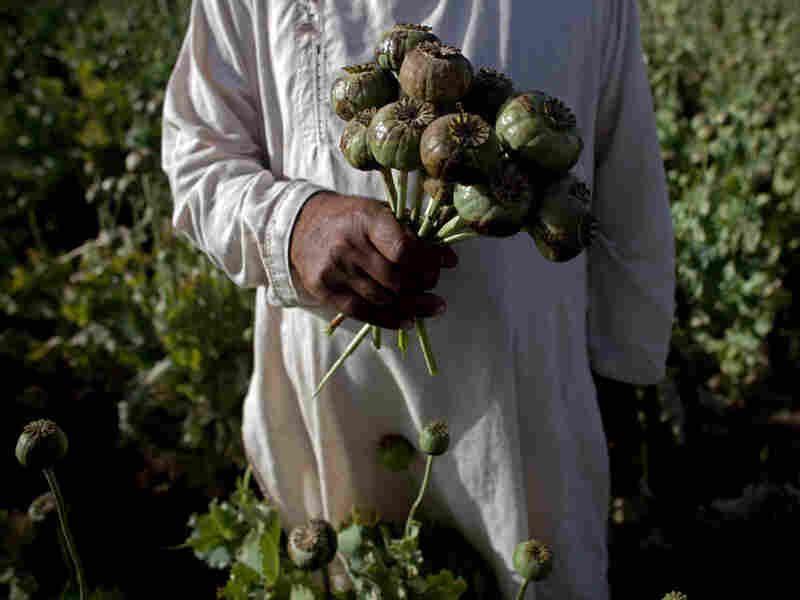 An Afghan holds a bouquet of poppies near the city of Kandahar, Afghanistan. Majid Saeedi/Getty Images hide caption 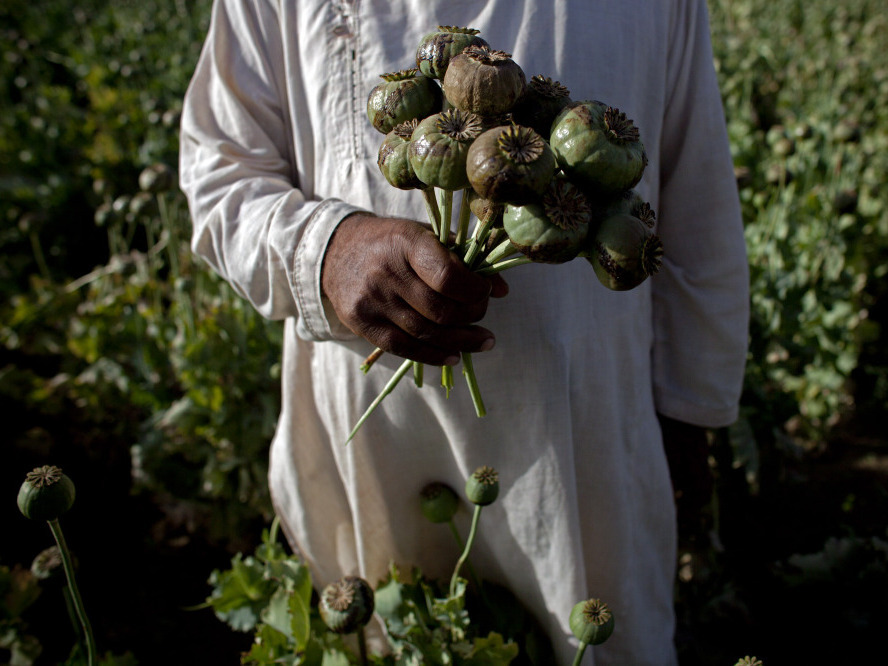 An Afghan holds a bouquet of poppies near the city of Kandahar, Afghanistan.

'It's Right For Us To Grow Poppy'

Kahir, a farmer in Nangahar province, is one of those on the fence. A year ago, he was looking at a meager profit from raising cattle. Now, he's made about five times as much growing poppy on his small plot.

Kahir is worried that the government might eradicate his crops, so each year, he tries to see how serious the government is about enforcement. He also checks whether it's offering him any alternatives. He's heard about alternate crops, but nothing ever comes through.

"The government, when they lie to us, when they make a promise they do not deliver, and we feel the government has lied to us, then we feel it's right for us to grow poppy," Kahir says.

This year, a blight wiped out some of the poppy crop. That drove the price up a shocking 300 percent — meaning more farmers will be tempted to plant poppy next year.

The Economic Competition Is Leaving

Even as authorities set fire to Ahmadi's 11-ton mound of drugs, they were well aware that the economic factors sustaining the drug trade haven't changed for years. They also know one big change that's on the way.

The billions of drug dollars will probably remain constant. But the billions in aid money — the only inflow that comes anywhere near parity with the drug trade — is going away.

"If you're not careful, Afghanistan will become a narco-economy post-2014," says Jean Luc Lemahieu from the United Nations' counterdrug agency in Afghanistan.

He points out that if aid shrinks as expected, along with the American troop drawdown over the next three years, the illicit drug economy could become many, many times bigger than the legitimate economy. Lemahieu says the corruptive power of such money would virtually take over the Afghan state.

Despite the warnings, neither the Afghan government nor the international community has made tackling drugs a top priority, Lemahieu says. In fact, he adds, drugs didn't even make the list of Afghanistan's 22 top issues from last year's conference in Kabul of the Afghan government and donors.