Accessibility links
China Seeks To Carve Out A Space Of Its Own Having sent "taikonauts" into orbit, China now has the moon and a space station on its horizon. One educator says he doesn't think China will ever "be No. 1" at the rate it's going, but there's a focus on the future — like a new space education center in Beijing, where kids can simulate a rocket launch. 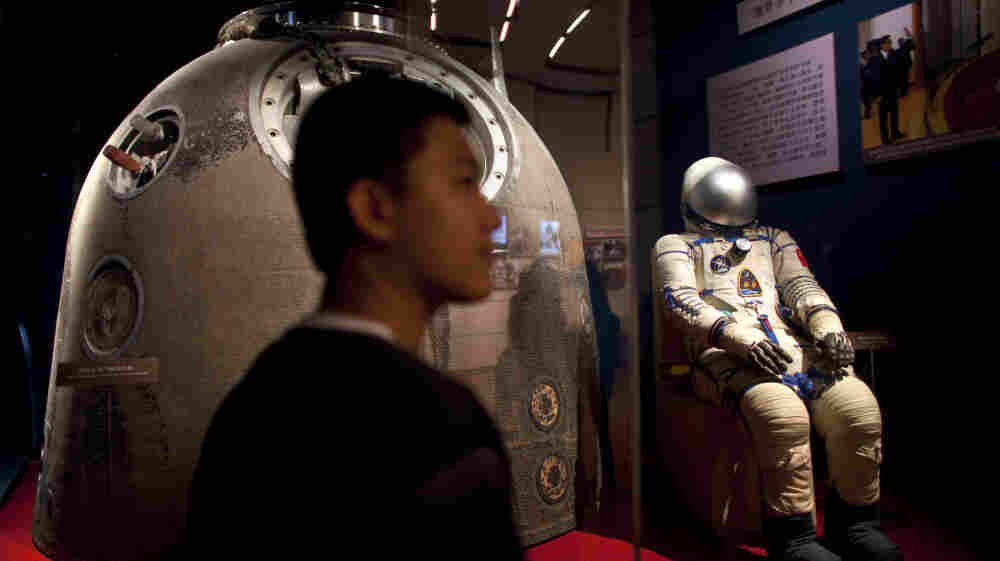 A visitor stands near the Shenzhou 5 re-entry capsule, used in China's first human spaceflight mission, and the spacesuit worn by crew member Yang Liwei, at an exhibition in Beijing on July 6. Alexander F. Yuan/AP hide caption 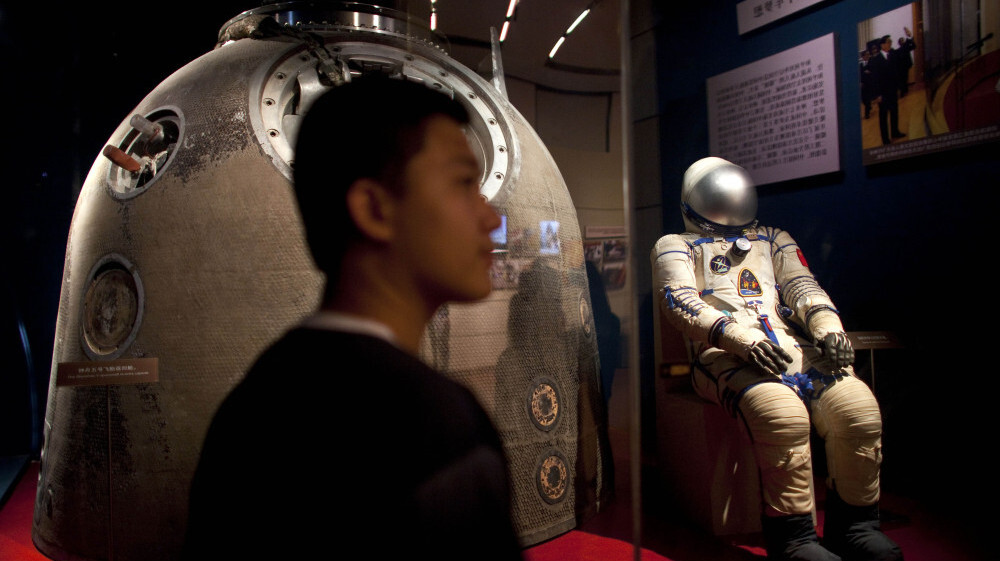 A visitor stands near the Shenzhou 5 re-entry capsule, used in China's first human spaceflight mission, and the spacesuit worn by crew member Yang Liwei, at an exhibition in Beijing on July 6.

As the U.S. winds up its space shuttle program, Beijing is shooting for the moon.

Chairman Mao once said China would never be a great nation if it couldn't even shoot a potato into space. But in 2003, it became only the third country to send a man into orbit, and since then it's launched five more astronauts — or "taikonauts" as they've been christened here, showing how China is even trying to leave its own mark on space vocabulary.

In 1970, China's first satellite blasted the Maoist anthem "The East is Red" from space. Indeed, space has always been political in China, a statement of the country's scientific and technological prowess. Three years ago, when Col. Zhai Zhigang became the first taikonaut to conduct a spacewalk, he waved a Chinese flag as he floated out of the exit hatch into space. 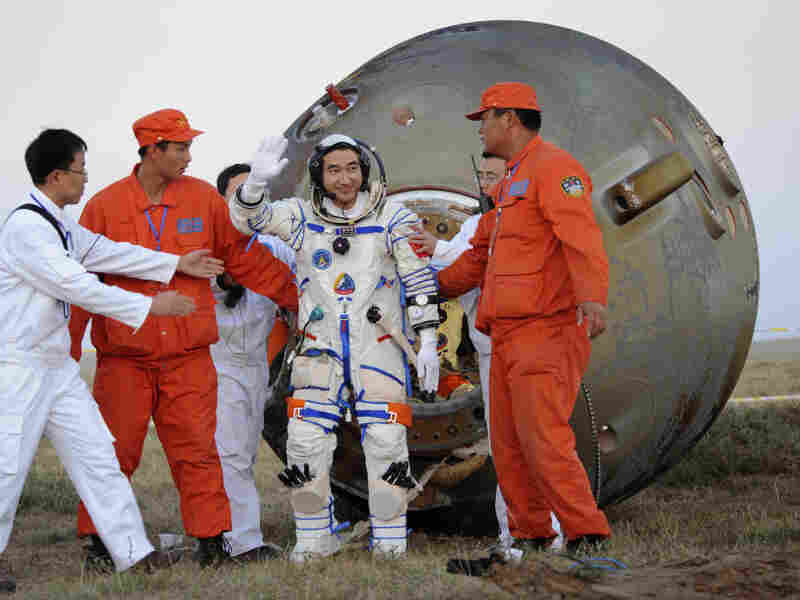 In this photo released by China's Xinhua News Agency, taikonaut Zhai Zhigang waves after getting out of Shenzhou-7 re-entry module after its landing in 2008. Zhai conducted the country's first-ever spacewalk during the mission. Li Gang/AP hide caption 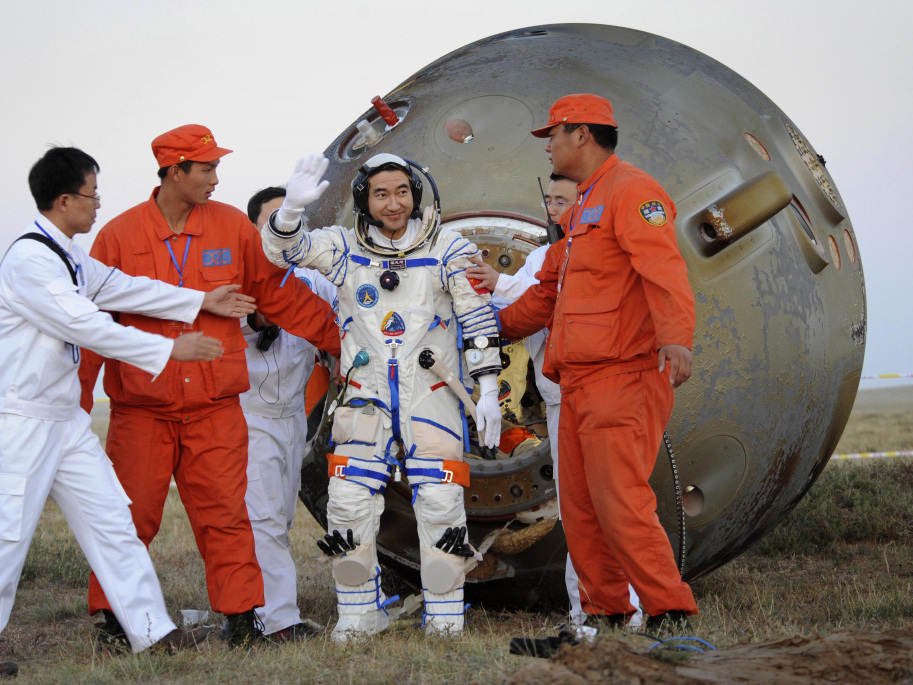 In this photo released by China's Xinhua News Agency, taikonaut Zhai Zhigang waves after getting out of Shenzhou-7 re-entry module after its landing in 2008. Zhai conducted the country's first-ever spacewalk during the mission.

"I feel very good," were Zhai's first words, transmitted live to the anxious television audience as he tested his $4 million Chinese-made Feitian spacesuit. This moment was another step toward the realization of China's grand ambitions in space.

A Space Station, And Mission To The Moon

The country is now due to launch Tiangong-1, the first module of its own space station, possibly before the end of September this year. This will dock with an unmanned spaceship, Shenzhou-8, in China's first ever in-orbit docking attempt. Next year, two or three astronauts will be sent into space for the first manned docking.

Beijing hopes to put a rover on the moon by 2013, and then a man on the moon, as well as opening its own space station by around 2020. But its ambitions could be greater still than those being publicly announced.

"What we have seen again in reporting, as opposed to official documents, seems to be a group of Skylab-type Tiangong stations to be followed by a Chinese version of the International Space Station, which would suggest that China is aiming for a long-term human presence in [inner] Earth orbit," says Dean Cheng, an expert in China's space program at the Heritage Foundation. "Given past Chinese history — which is that their missions always last longer, weigh more, achieve more [than U.S. missions] — it is quite likely that the Chinese would try to set up some kind of longer-term presence on the moon, measured in weeks or maybe months."

Nowadays, money is being invested not just in space exploration but also in space education. That much is clear at a brand new $6 million space center for kids in southern Beijing's Fengtai district, where elementary school kids sit in a miniature launch control room. 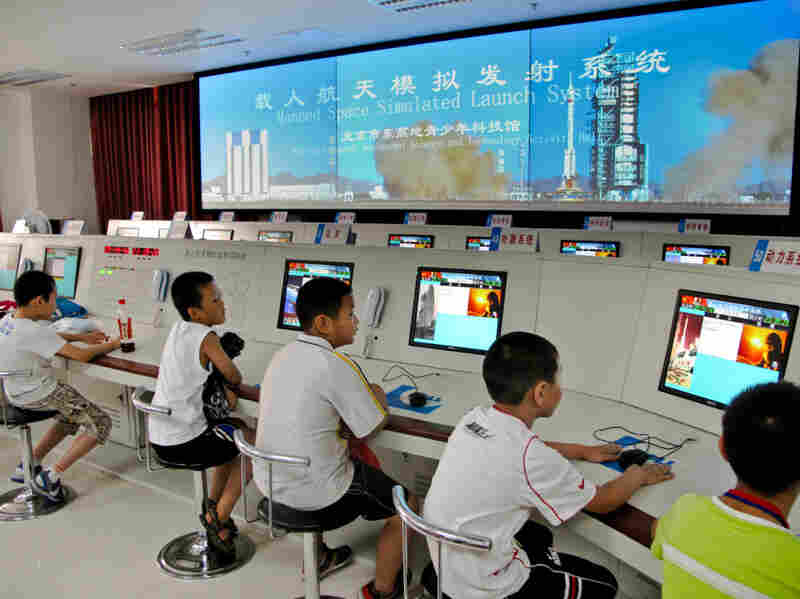 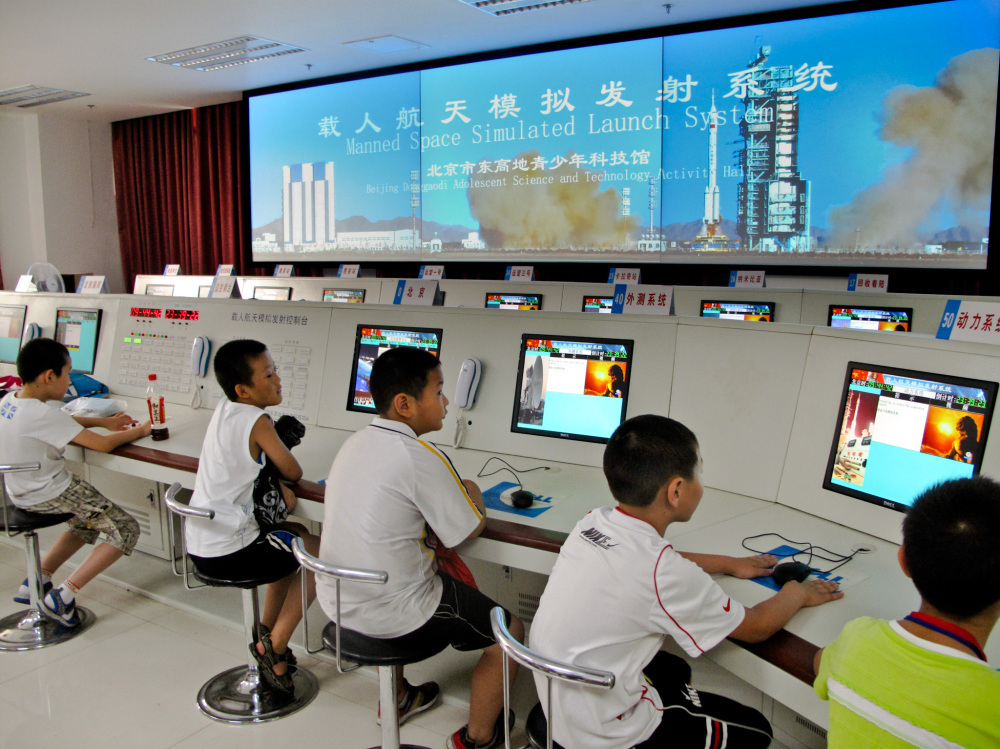 They're carrying out a simulated rocket launch, complete with their own miniature astronaut ensconced in a minicapsule, being watched on-screen by his classmates. He was chosen from the group for his lack of dizziness after spinning around on the three-axis astronaut training machine downstairs. Some of the tinier kids are confused and are even heard to ask, "Are we really sending him to space?"

With its patriotic films about heroic spacefarers backed with stirring music, this center is certainly stoking pride in the space program. "China's space program will be better than America's," says 10-year-old Ding Ruizhe.

But the man in charge of educational outreach, Zhang Guan, isn't so sure. "China's only just figured out how to send people up to space and bring them back safely," he says. "There's still a huge difference between us and space powers like the U.S. and Russia."

As an example, he cites the fact that China is only now about to launch its own space station module. "This is 40-year-old technology," he says mournfully. "At this rate, I don't think we'll ever be No. 1."

An 'Urgent' Need For Spacecraft

Government agencies and scientists turned down NPR's repeated requests for interviews on China's space program. But the country's chief spacecraft designer, Qi Faren, has spoken publicly about the space race with other developing countries, mentioning India and Pakistan. In March of last year, he described China's challenges.

"We urgently need to launch more spacecraft to fulfill domestic demands regarding economic development, national security and energy needs," Qi said. "There's a big sense of urgency. We need confidence, but at the same time, we need to feel a sense of crisis."

Speaking in 2008, President Hu Jintao said China wants to cooperate in space with other countries, and he emphasized China's peaceful use of space. But China's destruction of an obsolete weather satellite in 2007 raised international suspicions about its motives.

Since then, it's held two more exercises, conducting what was effectively an anti-satellite test and bumping two satellites together, both without any warnings, adding to concerns about the opaque nature of China's space program.

"All of this is basically the sort of thing you would be doing if you wanted to demonstrate a capacity to threaten other countries' space assets," says the Heritage Foundation's Cheng. "Given the very high dependence of the United States on space systems for everything from reconnaissance to navigation to communications and weather prediction, this is a clear signal to the United States that its unchallenged control of space is over."