Each day, millions are playing the online game FarmVille, where they plant crops, raise livestock and spend virtual currency on supplies. Now there are concerns that using virtual money might trigger overspending of real money. Host Michel Martin speaks with Money Coach Alvin Hall to learn about crimes and dangers related to virtual currency. 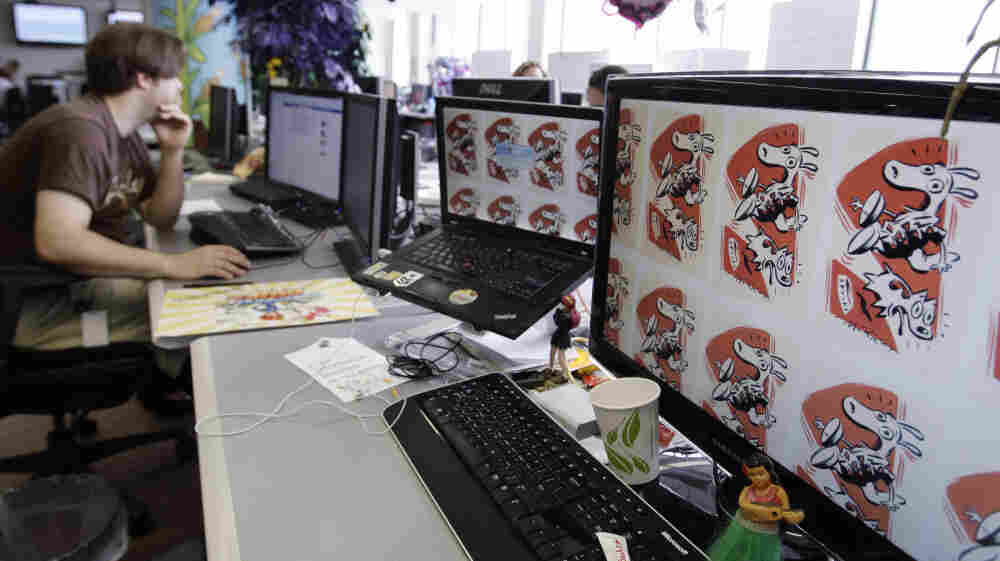 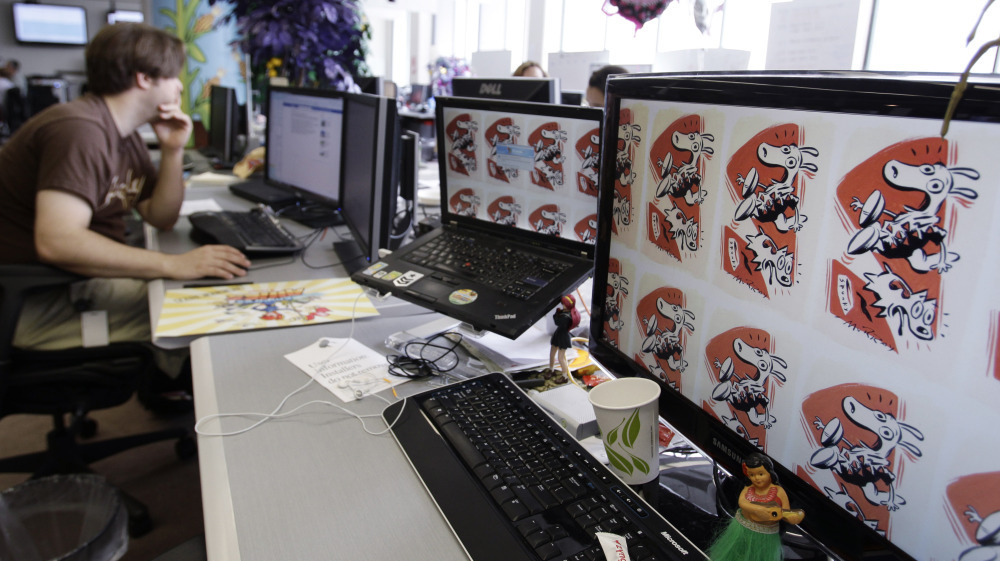 An employee works on the Zynga game "FarmVille" at Zynga headquarters in San Francisco.

I'm Michel Martin and this is TELL ME MORE from NPR News. Coming up, we have the latest installment in our Flying High series. We're marking the end of the space shuttle era by speaking with some aerospace pioneers. Today, we speak with Ellen Ochoa. She was the first Latina to travel to space. But first to matters of personal finance. It's growing season in much of the U.S. and as farmers tend to their crops over the summer, there's one place where it's always growing season.

That place is Farmville. It's one of the most popular games on Facebook and tens of millions of people play each month. Players plow virtual fields, plant virtual crops and raise virtual livestock. And you can't run a pretend business without pretend money, right? In Farmville, players use Facebook credits, a form of virtual currency, to buy supplies. For many players, that's just part of the game, but it's also serious business. Recently, the Federal Trade Commission was asked by a consumer group to look at whether Facebook credits violate anti-trust laws.

And beyond the legal questions, some people are starting to worry that virtual currency warps a user's perception about money leading to overspending and some other bad financial habits. So who better to ask about this than our money coach, personal finance expert Alvin Hall. He's with us once again from our bureau in New York. Hi, Alvin. Welcome back.

ALVIN HALL: I'm glad to be back as a future farmer of America when I was young.

HALL: Yes, I was. I was a Future Farmer of America.

MARTIN: That was real. You were really...

MARTIN: What was your - did you do livestock? What did you...

HALL: Oh, we did livestock. We planted okra, tomatoes, corn. We had pigs. We had cows. We had fruit trees. It was a pretty big - a substantial family farm we had.

HALL: No, there are other companies that are doing this. And it started out in the gaming world so that if you wanted to buy certain products or you wanted to speed up certain processes, you could actually acquire these virtual currencies and make it happen. And then, a company called Bitcoins expanded this and decided that they would offer this service on an international basis so they offered this Internet currency that you could then do person-to-person transfers between. So it's a world that's seems to be growing, but I'm sure that it's not dangerous.

MARTIN: Well, talk to me a little bit about why you think it might be dangerous.

HALL: Well, I think that plastic credit cards started to remove people from the reality of money. So you use your credit card or your debit card and money moves in and out of your account. Here you're playing a game with virtual money. And at first, it can be a very good learning tool to help people understand that you have to pay for some things and that the costs go up or go down over a period of time. But then, when you start to use this money in ways that encourage you to take greater and greater risks, it may be encouraging people to use actual money in that way because they're too detached from it.

MARTIN: And there's also crime in this realm, is there not?

MARTIN: I understand that there was a huge heist of Bitcoin currency.

HALL: Exactly. Bitcoin has an exchange business called Mt Gox and somebody actually broke into that and managed to pull out about a half a million dollars in valuable Bitcoins from that. So people think these sites are very secure, but hackers attack them because they see this money as having value. And what's interesting about that is that Bitcoins went from having a value of $17 to having a value of one cent after the hacking occurs.

MARTIN: But does this have any meaning in the real world?

HALL: I question whether it does. Bitcoins holds out that you can buy products with it. Mostly, you can buy things in the gaming world with it, although there are there are a few websites that will let you use Bitcoins for that. And also they will let you trade Bitcoins with other people. I think this virtual money is ultimately a little dangerous. First of all, what's really backing it? Is there a government backing it? Is there a bank backing it?

MARTIN: Well, but the alternate view of that is if the people - you know, just because actors may play criminals, that doesn't mean that they go out and rob banks, right?

MARTIN: Or even if they engage in certain conduct that...

HALL: I agree with that.

MARTIN: ...wouldn't meet their own personal moral standards, that doesn't mean that they're, you know, they're committing adultery or doing whatever because they're acting. Why isn't this just - let's say is kind of democratizing acting in the same way that the, you know, the Internet has kind of democratized other things like news gathering, that anybody can do it without really doing it. Is that so terrible?

HALL: I don't think it's terrible if there's a moral component driving it so that people will not start to use it for illegal means. But anytime you have a facility that will allow for the large transfer of money from one person to another directly, eventually somebody's mind will start to say, well, not only can I pay for that sweater that way, or not only can I pay for that car that way, but I can also acquire other things. So I think when you have these open systems, everything starts out being about democracy, but then gradually criminal elements will enter it.

MARTIN: If you're just joining us, you're listening to TELL ME MORE from NPR News. We're talking about virtual currency with a money coach, our personal finance expert, Alvin Hall. What do you recommend? You often think not just about the problem, but about the solution. Is there something that you'd recommend here? I mean, this isn't the only realm where many people think the technology has outpaced the ethics.

MARTIN: So what do you think should happen here and do you have some thoughts about how people should regulate their own participation in these kinds of activities if they enjoy them?

HALL: I do. I think that people should recognize that these games are merely social networking locations where you can get to know somebody. You may discover that farming interests you in some way. But remember, it's a game. And if this game starts to encourage you to take riskier and riskier behavior because you believe that there's going to be a big payout, understand that that mindset could lead you to start doing the same thing with your money. So monitor your behavior very carefully. Also, when you're talking to other people on these websites, be careful that you don't become subject to undue influence by somebody saying, let's try this method. This may work for you.

All of those things could lead you down a path that you don't anticipate. Remember, these are games. They're fun. They can teach you the basics of how to handle money, but they may not translate seamlessly into the real world.

MARTIN: Alvin Hall is our regular contributor on matters of personal finance and the economy. He was kind enough to join us from NPR's bureau in New York. Alvin, always so good to talk to you.

HALL: Good to talk with you. I'm going to go and get my Future Farmer of America jacket out and see if it still fits.

MARTIN: I'm sure it does.