Accessibility links
Roger Clemens Lied About Steroid Use, Jury Told The seven-time Cy Young Award winner faces charges of perjury and obstruction of Congress — which carry a maximum penalty of 30 years in prison. The prosecution says it has physical evidence against the baseball pitching star, but Clemens' attorney contends the evidence is fake. 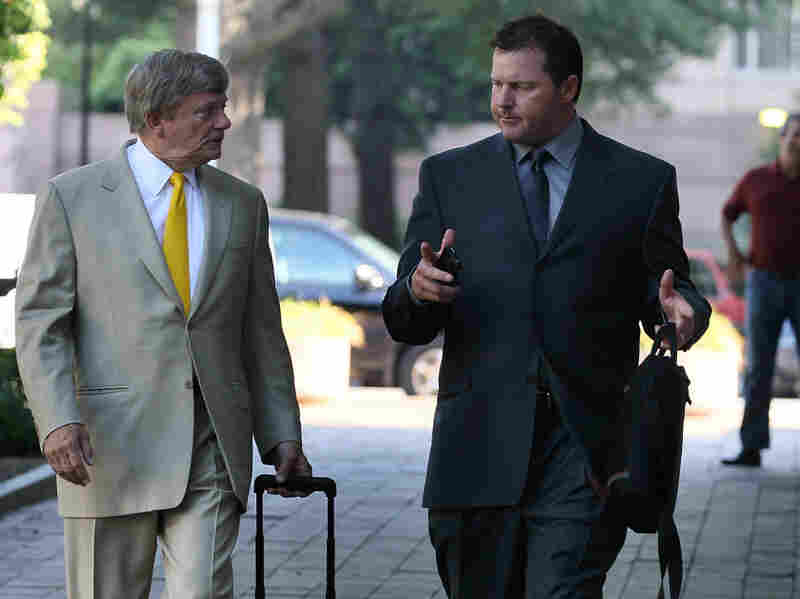 Baseball pitching star Roger Clemens (right) walks with his attorney, Rusty Hardin, as he arrives at the U.S. District Court for the start of his perjury trial on Wednesday in Washington, D.C. Mark Wilson/Getty Images hide caption 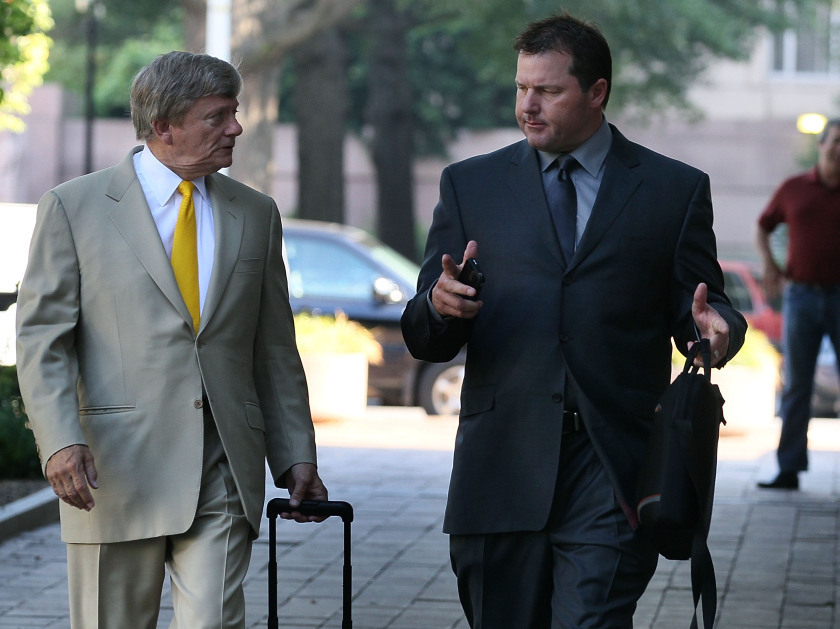 Baseball pitching star Roger Clemens (right) walks with his attorney, Rusty Hardin, as he arrives at the U.S. District Court for the start of his perjury trial on Wednesday in Washington, D.C.

Baseball pitching star Roger Clemens, winner of a record seven Cy Young Awards, sat silently in federal court on Wednesday as his trial opened on charges of perjury and obstruction of Congress — charges that carry a maximum penalty of 30 years in prison.

Clemens remained expressionless as the prosecutor, Assistant U.S. Attorney Steven Durham, told the jury that the government had physical proof that the 48-year-old onetime pitching ace had been repeatedly injected with anabolic steroids and human growth hormone.

Clemens, whose fastball was so powerful he earned the nickname "Rocket," is not charged with using steroids or other performance-enhancing drugs. Rather, it is his denial of steroid and HGH use in testimony before a House committee in 2008 that could cost him his freedom. He is charged with six different counts of perjury, making false statements and obstructing a congressional investigation into the use of banned substances in baseball.

During his congressional testimony, Clemens said, "I've been accused of something I'm not guilty of. ... I've never taken steroids or HGH."

Outlining the charges against him on Wednesday, Durham portrayed Clemens as an aging star who, beginning in 1998 and ending in 2001, was injected with steroids and HGH to prolong his lucrative career and get into the Baseball Hall of Fame. Durham charged that Clemens, rather than admit his drug use, voluntarily testified before Congress in a vain attempt to preserve his reputation. "He raised his right hand and swore that he never used" steroids, Durham told the jury. "That was false, and he knew it. "

Even in Durham's telling, the heart of the case against Clemens is the testimony and evidence produced by Clemens' onetime trainer, Brian McNamee. The prosecutor said McNamee will testify that he repeatedly injected Clemens with steroids and HGH.

The prosecutor conceded that the jury would hear many "bad things" about McNamee, and that's why Durham said the government will produce corroborating evidence for everything McNamee says.

Most damning, he suggested, is the physical evidence — the cotton balls and needles produced by McNamee that the government had tested at two private labs. Those labs, said the prosecutor, found Clemens' DNA along with traces of anabolic steroids and HGH, but no evidence of lidocaine or vitamin B-12, the substances that Clemens said McNamee did inject him with.

Durham said McNamee saved all this incriminating evidence because he "didn't trust" Clemens and feared that if the "going got tough," Clemens would "throw him under the bus."

Hardin is a colorful trial lawyer from Houston who has represented Wade Boggs, Scottie Pippen and other athletes, in addition to major corporations like Exxon Mobil. He said that McNamee had fabricated the evidence to avoid being prosecuted himself. According to Hardin, federal agents told McNamee they didn't believe his denials of involvement; they told him they believed Clemens was using banned drugs, and they offered the trainer a deal if he would implicate Clemens.

"All roads lead to Brain McNamee, in this case," Hardin said. And "to put it delicately, he is a liar. ... He totally made this stuff up."

"Roger Clemens' only crime was having the poor judgment to stay connected to Brian McNamee," Hardin said.

The defense lawyer rejected the prosecution's portrayal of Clemens' congressional testimony as "voluntary." Clemens' testimony, he said, was only "technically voluntary" since he was told he would be subpoenaed if he didn't agree to testify.

"It's a fact of life," said Hardin, "that sometimes when people reach the mountaintop, there is an unwillingness to give them equal consideration when people come down on them. And that's what happened to Roger." Given Clemens' fame, Hardin told the jury, he had no choice but to testify before Congress because not doing so would have sealed his fate in the eyes of the public. And by requiring Clemens to testify, and knowing full well that he was going to deny the allegations, Congress set Clemens up for the eventual prosecution that began on Wednesday, Hardin asserted. "Roger Clemens, unless he was comatose, knew the dangers" he faced in denying the charges against him under oath.

As the trial continues, the prosecution is expected to call McNamee and former teammate Andy Pettitte, who pitched with Clemens while in New York and Houston and is expected to testify that Clemens told him he was using banned drugs. Hardin said Clemens does not think Pettitte is lying; rather that he either misheard Clemens or misunderstood something he said.

Hardin claimed on Monday that the prosecution's theory of the case makes little sense, since Clemens continued to pitch brilliantly for six years after the prosecution says he stopped using performance-enhancing drugs — including winning his seventh Cy Young Award.

Clemens began his career with the Boston Red Sox in 1986 and later joined the Toronto Blue Jays, New York Yankees and the Houston Astros. After two previous temporary retirements, Clemens ended his professional baseball career in 2007. He is third on the all-time list with 4,672 career strikeouts and has 354 wins.