Accessibility links
In 'Harlem,' New Faces Occupy An Old Neighborhood In Harlem Is Nowhere, Sharifa Rhodes-Pitts brings a dynamic new lens to the much-written-about New York neighborhood. Commentator Ralph Eubanks says the book's particular charm is in the urge it gives the reader to revisit the old Harlem classics. 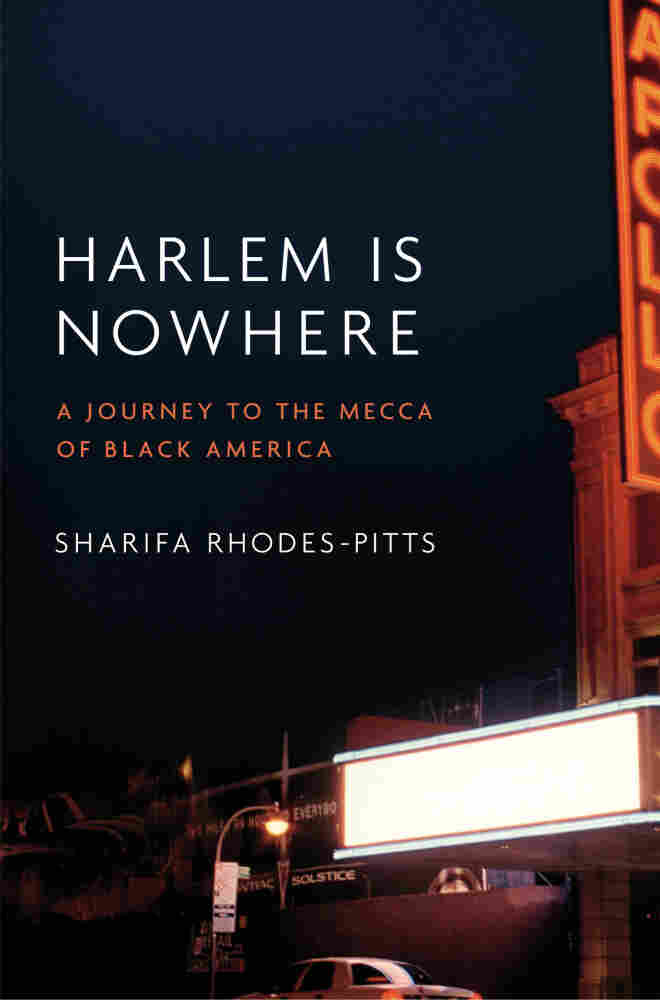 For me, one of the joys of reading is finding a book that leads me to another book, or even several books. Perhaps a passage will remind me of something I read long ago, or maybe the writer's prose will gently guide me to something I intended to read but never did, often absolving my guilt in the process. I found this joy in Sharifa Rhodes-Pitts' Harlem is Nowhere: A Journey to the Mecca of Black America. Her references to the great writers of the Harlem Renaissance led me to a number of titles that were already on my personal bookshelf as well as a few that were not.

Most important, Rhodes-Pitts' book led me to rediscover a collection of Ralph Ellison's essays called Shadow and Act, and specifically his essay "Harlem is Nowhere." Rhodes-Pitts uses Ellison's title, and parallels his journey through the neighborhood. Ellison's Harlem, which he studied and documented in 1948, is a place that is both the scene and symbol of black American life. Rhodes-Pitts' syncopated prose and respectful riff on Ellison's essay gives readers a sense of what has changed on the other side of Manhattan's 110th Street — and what has not — in the past 63 years.

Of course, there are many voices you would expect to hear in the pages of Harlem is Nowhere: Langston Hughes, Jean Toomer, Zora Neale Hurston, Amiri Baraka, to name a few. As I read, an almost magnetic pull led back to these books and anthologies that dot my bookshelves. But for every character from Harlem's history I thought I knew, Harlem is Nowhere gave me little-known figures that did not turn up in my book collection. In a chapter called "Harlem Dream Books," Rhodes-Pitts tells the story of Alexander Gumby, a fascinating yet tragic man with a profound sense of racial pride. He felt driven to compile, collect and curate the achievements of black Americans into scrapbooks. I had never heard his name before, but he became as important to me as the literary giants whose work I was compelled to reread.

Hear An Interview With Sharifa Rhodes-Pitts

But Rhodes-Pitts' Harlem is Nowhere is not just another book about Harlem's colorful figures, its glory days, or a meditation on the literary boldface names of the Harlem Renaissance and beyond. Rhodes-Pitts also interviews contemporary Harlem residents — the ordinary people she encounters on the street and at community meetings. She analyzes messages left by anonymous scribes who write in chalk on the sidewalks of Lenox Avenue. This keeps her narrative rooted in the present — and kept me from constantly running to my bookshelf.

Still, Harlem's tangled history is always in the background, intoxicating in both its richness and its realities. But by weaving the past and the present together, Rhodes-Pitts reveals, even to those who may have never ventured into Harlem, why it is a place of dreams and why it endures. And most important, she pushes her readers to explore the books and writers that made Harlem such a place of imagination and memory. For a reader like me, it just doesn't get any better.

W. Ralph Eubanks is director of publishing at the Library of Congress. 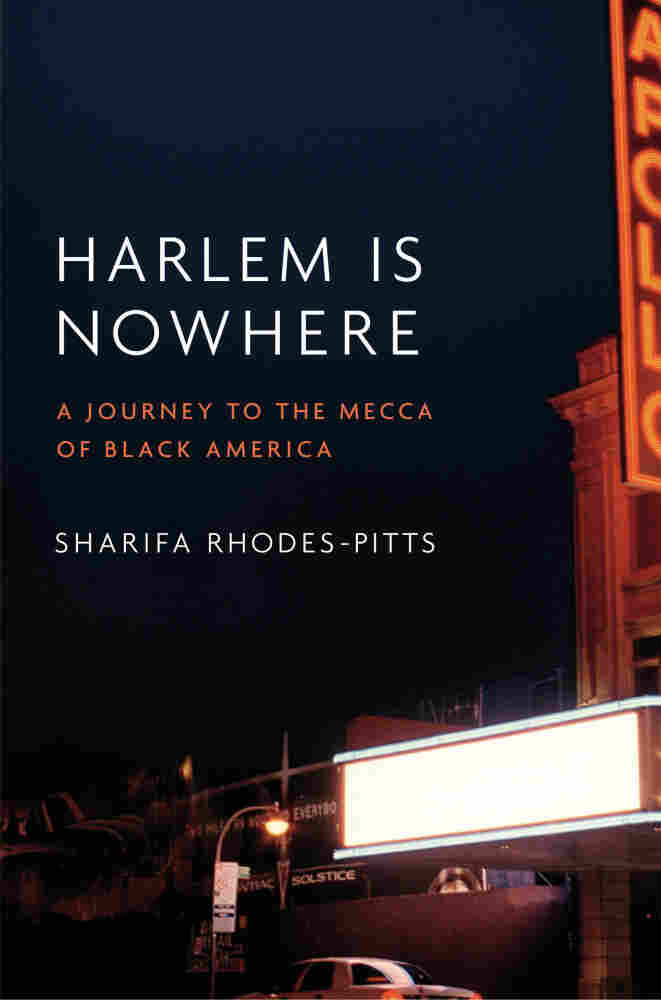 I used to stare into similar wide, open spaces as a child. I grew up in a city where the combined meaning of the words urban and planning was imprecise. To reach the side of town where we lived, you took a highway from the city center that crossed vast stretches of undeveloped land. From the window of our car, I stared into these spaces. I sought evidence of activity in the deep distance — perhaps a figure dashing across the field — from which I could invent a story. Typically, the only figures in those fields were small herds of undernourished horses or cattle. This brittle land was used as a makeshift pasture — livestock foraged for nourishment among the dry brush between oil pumps and electric towers. I looked out the windows of our car to see how far into the horizon my eyes could carry me, watching for something I hadn't noticed before. But that landscape never changed. It was twenty years before new housing was built along that highway. When I was a child, those fields were always marked with faded billboards offering the acreage for development, perpetually in search of a willing taker.

When I came to live in Harlem, the fenced-off, overgrown empty lots here also attracted my eye. At first, they were evidence: I had indeed arrived in the place I'd heard of. The empty lots held some significance; it was similar to the feeling I'd had when, riding from the airport in New Delhi, I first saw cows in the road. Yes, this is the place I have heard about, I'd thought. There are cows all over the road exactly as they were in the guidebook pictures. The empty lots in Harlem had the same verifying quality. Later, those empty lots provided something beyond veracity. They were a place for the eyes to rest. This was not some romance for ruins. These blank, disavowed spaces had been labeled as blight, but they provided a visual and mental break from the clamor of the buildings and people. There was a hint of the horizon.

Here was solace from the crowded landscape — both the physical crowdedness of buildings and people and the crowd of stories and histories. A friend of mine describes certain cities as being full — too much has happened there, you cannot move. Paris, he says, is the quintessentially full city. I suspect he'd say Harlem is another place that is too full — though its crowdedness and overpopulation have been discussed in other terms. In the empty lots, my mind escaped history.

Later I understood that these empty fields were indeed the setting of a history, the loathsome history of neglect and destruction stretching back to the beginning of black settlement in Harlem and its corollary, white flight. But at first, as in Texas, those spaces where my thoughts played were just settings for scenes and fancies whose significance was fleeting. I admired the wild patches of Queen Anne's lace that grew up in summer. Independent businessmen used some lots as locations for unofficial open-air markets, selling used furniture or vintage clothes.

Many of these places are now occupied by new condominiums. One is now a Mormon church. As the empty lots disappeared, I became more interested in what was there before. In some places it is possible to see what was there: the foundation of a building remains; a front stoop rises up from the sidewalk but leads to nothing. Such things recede into the background, part of the natural history of this place, as if they had always been like that. But this is the evidence of an unnatural history — it was not always this way, it came to be that way for a reason.

There are new empty lots different from those I noticed upon first arriving. Returning after a year's absence, I found an empty lot at the southwestern corner of Lenox Avenue and 125th Street. It was covered with fresh gravel, to stop its reversion to a wild field. When I first saw the lot something sank inside of me — the sensation mocked the feeling of a demolition, a building brought to its knees. This new empty lot opened a new horizon: from 125th Street you could see clear through the block to 124th Street. But the view was not one that gave rest or inspired the eye and mind. There was only the instantaneous, frantic search for something that once was there and was there no longer.

It was a grand old apartment house whose facade hugged the corner, making the intersection look like a stately plaza. It might have been a candidate for landmark status, but its windows were sealed up with cement bricks. Soon after I arrived in Harlem, the few tenants remaining in the building's storefronts — a decrepit Chinese restaurant, a flamboyant haberdashery, a store specializing in women's undergarments, and a shoe shine and repair service — had all closed up shop.

The building stayed in place long after those stores had gone. For a few years it brought revenue as the background for various athletic-wear billboards; for several seasons a heroic image of Muhammad Ali, having just knocked out an opponent, loomed over Lenox Avenue. I heard a rumor that the building had not been demolished because a family lived inside and that they'd defiantly refused to leave when the other tenants cleared out. This seemed impossible with all of the windows bricked over, and I never saw anyone enter or exit the building. But I did always see — through a small window in a battered door on Lenox Avenue — a light illuminating the vestibule.

There used to be an empty lot near my house, on Seventh Avenue just south of 133rd Street. One day in summer, I saw through its chain-link fence a pile of watermelon rinds at the rear of the lot. There was an open pit in the ground nearby, where someone was burying the waste. Later, the pile disappeared and the open pit was covered by recently turned earth. Soon, construction began on that site. It was only a matter of weeks before the frame of a new building rose up on the lot. A security guard was now stationed there each night to guard the property. He didn't wear a uniform, and like many of the men (and sometimes women) who work security jobs at construction sites in Harlem, he was an immigrant from West Africa.

Later, when construction was nearly completed but the premises were not yet occupied, I passed again one night and saw through the building's glass doors the outline of a man sitting in the condominium entry. He kept watch in near darkness, visible only by the light of a nearby street lamp. Whenever I passed the spot, I looked to see if anyone was inside. Sometimes the guard was there, slumped in his seat, sleeping through his shift out of exhaustion or boredom. Other times, there was only an empty chair. A few times, the watchman waved hello. Once, the figure beckoned me inside.

I didn't accept the invitation. The building still looked unoccupied, but a large sign now hung from its facade. The building is called the Ellison. To advertise the property, the sign shows a photograph of a handsome, clean-cut young black man in a suit. He is shown in regal profile, his eyes are closed, his chin is lifted toward the sky. Change your state of mind, begins the sales pitch for the new condominiums. The man on the sign looks lost in contemplation, on the brink of transcendence, about to receive some celestial enlightenment. Or maybe he has just thrown back his head and is about to unleash a howling laugh. 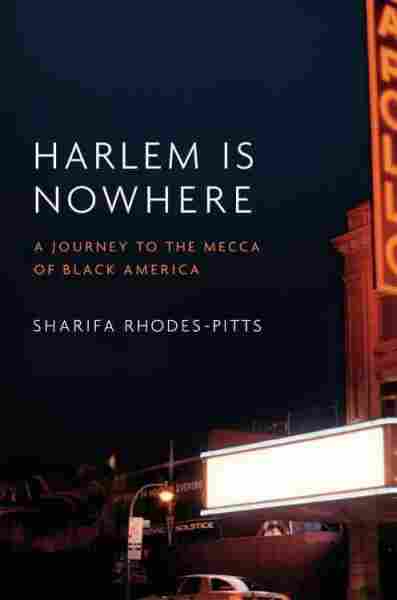