Accessibility links
'When Tito Loved Clara': Changing Fates In Manhattan Jon Michaud, the librarian for The New Yorker, has written a debut novel about high school lovers in upper Manhattan who go on to live very different lives. Both immigrants from the Dominican Republic, Tito and Clara's paths diverge. Michaud's novel is a heartfelt rumination on escaping one's fate. 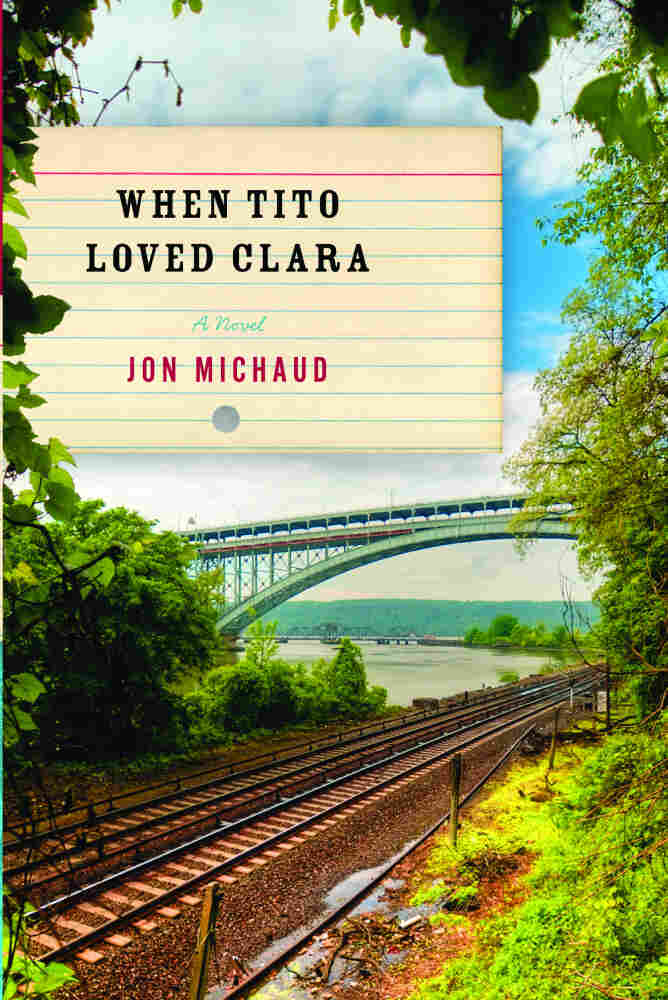 Jon Michaud's first novel, When Tito Loved Clara, follows the intersecting stories of its title characters: former high school lovers, both immigrants from the Dominican Republic who grew up in Inwood, or, as Michaud writes, "the forgotten part of Manhattan."

When the story begins, the two have been separated for nearly 15 years after trudging different paths in adulthood. Clara escapes the old neighborhood, leaving behind an alcoholic father and abusive stepmother for the suburban bliss of a colonial-style home in the New Jersey suburbs — complete with a white husband, loving son and the kind of steady job set aside for ambitious people with college degrees. Tito lives in his parents' basement in the apartment he'd sneak back to after trysts with Clara in Inwood Hill Park all those years ago, working for the same moving company that occupied his afternoons and weekends in high school.

This immediate lack of middle ground makes of Clara and Tito typologies, predestined archetypes one would expect to find in a naturalist like Theodore Dreiser. Even as Michaud gives them a rich, complicated history, their functions are clear. Clara is the assimilated American; Tito the poor immigrant. The novel exists for the purpose of complicating these roles.

Clara's family acts out, in the words of her husband, Thomas, "every cliche about Latino immigrants." Clara's sister Yunis leaves her in charge of her 16-year-old daughter Deysi, pregnant with Yunis' boyfriend's baby (Yunis doesn't know this yet). The boyfriend, Raul, is a tough guy who did time in Rikers for selling drugs and now works with Tito at the moving company (though Clara is unaware of that detail).

As Clara attempts to remain outside of the stereotype her family forces upon her, she and her husband deal with a typical set of problems plaguing modern white middle-class domesticity: Thomas, recently unemployed, is bored and cheating on Clara with a wealthy young widow. Clara is trying to get pregnant with a second child but is unable, she feels because of past wrongdoings. She goes through a series of expensive, invasive tests and fertility treatments.

Meanwhile, Tito's relative squalor — both financial and otherwise — is buffered by his sensitivity and the seriousness with which he takes himself. He is Raul's antithesis. He still actively desires the life he could have had with Clara, not to take the place of Thomas as the well-off suburban husband and father, but rather to brighten his days spent alone in the old neighborhood. 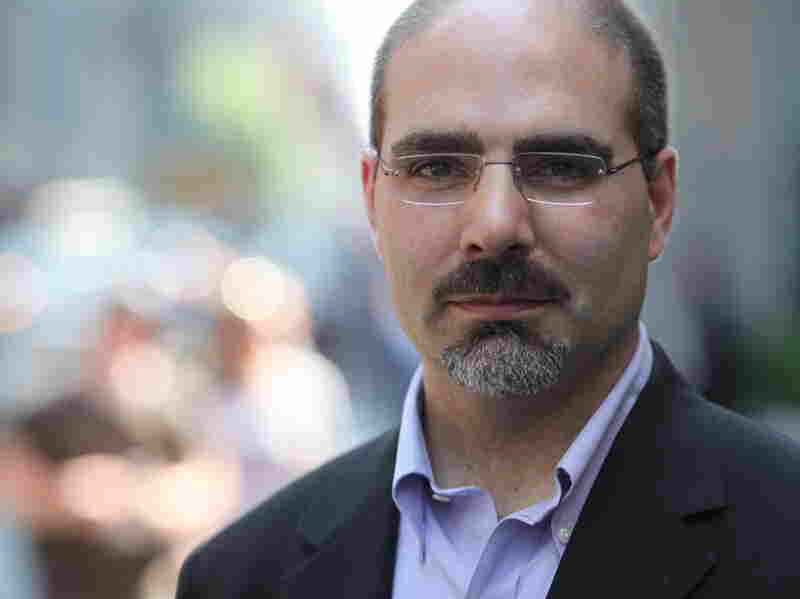 Jon Michaud is the head librarian at The New Yorker and worked previously as a librarian at Time Inc. and the Environmental Protection Agency. He lives in Maplewood, N.J. Brad Newman hide caption

Michaud, the director of The New Yorker's archives, writes with a librarian's sense of perfectionism. Each chapter's narration is focalized through a particular character's perspective, and the only overlap is when one character retells a given scene from a different point of view. This meticulous organization initially raises the stakes of the story — as the story rushes forward, we know Tito and Clara will have to confront one another — but it somewhat weakens Michaud's writing. At times, Michaud will sacrifice style in favor of plot, at one point dismissing what could be a lovely metaphor of New York into a frail simile: The city was "like heaven or the moon." The collision of Tito's narrative with Clara's is so precisely structured, we can even predict exactly what doomed conclusion awaits the participants.

But that is also part of the point. Like Dreiser's Sister Carrie, the tragedy comes when all parties involved realize there is no escaping fate, whether good or bad. Michaud hints at this in his epigram, from Thomas Lynch's The Undertaking: "If you love, you grieve and there are no exceptions — only those who do it well and those who don't."

In Michaud's universe, there are no in-betweens. A person can succeed at changing his position, change one fate into another; or he can fail, and find himself living an existence that belongs more to the past than the present. Life will make some suffer while others prosper, but everyone will always end up wanting more.

Depending who you asked, Ms. Almonte was either the greatest teacher in the history of the world or a hard-ass, stuck-up mulata bitch who thought she was the Queen of England and Miss Manners rolled into one skinny, titless body. She taught A.P. English and was known to fail students for a few misspelled words or for not knowing where to put an apostrophe. But the worst thing a student could do in her presence was throw Spanish words into an English sentence.

She had followers, mostly college-bound girls who imitated her in every way they could—some more successfully than others. These devotees belonged to the Word Club, an after-school program that had begun as a prep class for the verbal portion of the SAT, but soon morphed into an extracurricular finishing school for a handful of bright, ambitious, assimilated girls headed for scholarships to the Ivy League and Seven Sisters. Behind their backs—and sometimes to their faces—they were called lesbians and wannabe whiteys, but the fact was that almost every boy in the school was in love with Ms. Almonte or one of her girls in a way that the boys would never fully understand or admit to one another. She and her girls were beyond them; they lived in the territory of the imagination. Clara Lugo was Tito's Almonte girl. She was neither the prettiest nor the best dressed of them, but she had, by some measures, come the farthest to be there. She was dark skinned and had Chinese eyes. At her temples grew swirls of hair that looked like wispy reinterpretations of her ears. For a Dominican girl, she didn't have much of an ass, but she was tall and her hair was long and thick.

Tito and Clara had played together as children. Clara's father owned a hardware store on Dyckman Street, and Tito's father was the building superintendent for 222 Seaman Avenue — a good customer. On Sunday afternoons, when the store was closed, the two families met for picnics in the park. Tito retained a clear memory of the last afternoon the families spent together. The Lugos were still wearing their good clothes from Mass while Tito and his parents were dressed casually. He and Clara were in the Emerson Playground, twenty yards from the picnic blanket. Clara came too close to the swing he was on and his foot clipped her in the mouth. It felt like nothing to him, but she cried out and brought her hand to her face.

When she drew it away, her fingers dripped with blood. She ran to the blanket, where their parents were sitting with Clara's baby brother, Efran, eating pastelitos and drinking beer. "¡Que barbaro!" he heard his mami say, and then his papi came and yanked him off the swing to make him apologize.

Soon after that, his father and Don Roberto stopped speaking to each other. At first Tito thought it was because of the bloody lip, but, he later learned, the issue was a faulty power drill that Clara's father refused to take back, saying that it had worked fine when he sold it to Tito's father. The dispute escalated and Tito's papi took his business to the Jewish hardware store on Broadway—a declaration of war.

Clara's papi started saying things about Tito's father, implying that he had lived too long in that building full of white people, that he had forgotten he was Dominican, that his son watched too much TV. He was going to grow up godless and unable to speak Spanish. Tito had always been afraid of Don Roberto. He was big and loud, with a chipped tooth and pockmarked cheeks. How could a man so ugly have produced a daughter so becoming? He liked to slam his hands on the counter of his store when he was making a point to one of his customers—and, it seemed, he always had a point to make. Tito was forbidden from playing with Clara and she became, in time, just another neighborhood girl, glimpsed in the subway station or crossing Broadway.

Over the following months, his mother subjected him to a propaganda campaign about Clara's family. She said that Doña Dolores was not actually Clara's mother, that everyone in Inwood knew this. Don Roberto, she claimed, had abducted Clara from the Dominican Republic and brought her to the United States. Her father was strict with her, and her stepmother was wicked—straight out of Cinderella. At the time, Tito thought this was all just part of the feud between his parents and the Lugos and he forgot about it. Soon enough, he befriended some of the kids in the building his father managed and Clara all but slipped from his mind. That is the way things stayed until high school, when in a process as mysterious and unmeasurable as the growth of fingernails, she re-emerged from the general population of girls to become, first, a girl and, then, the girl. By then, she had grown and filled out, matured. Once she joined the Word Club, she began straightening her hair and wearing stylish clothing. She occupied more and more of Tito's mind and took on a significant role in his fantasy life. Between classes he looked for her, and when she did appear from the throngs in the halls, he trailed behind her, floating in the wake of her smell—of gardenias and candy—like a cartoon character following the scent of a freshly baked pie. Sometimes he would trail her all the way to the other side of the school, far from his next class. The bell would ring and he would come to himself alone in the hallway, late again. 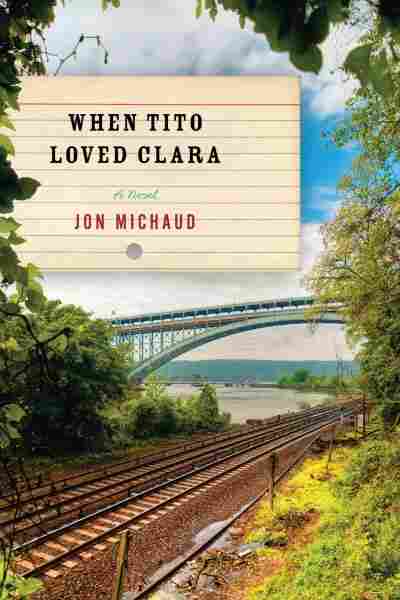