Accessibility links
'Unfamiliar Fishes': Sarah Vowell's Glib Luau Tales Sarah Vowell turns her acerbic wit on the epic story of Hawaii, up to the U.S. annexation in 1898. Vowell's quirky tone has its charming moments, but as critic Dan Kois writes, "deadpan casualness may not be a useful stance from which to approach the story of the death of a nation." 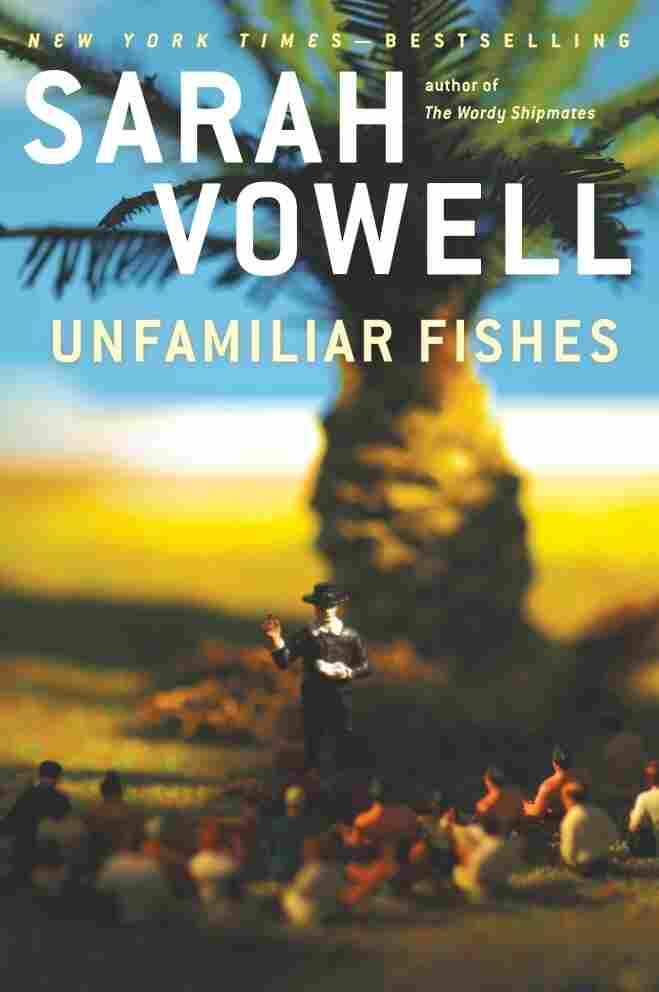 Sarah Vowell has always been a tourist. That's long been her strength as a writer — she's no historian, and doesn't claim to be. Instead, her books and essays (often delivered, to great effect, on public radio) view history with a visitor's eye, as the peripatetic Vowell wryly comments on the museums, monuments and tourist traps through which Americans filter their nation's stories. It's a method that served her well in Assassination Vacation, her comic examination of presidential killings, and The Wordy Shipmates, about Puritan culture in New England.

Unfortunately, it's a method that fails Vowell in her new book, Unfamiliar Fishes, in part because its subject — the short and awful history of Western intervention in Hawaii, up to U.S. annexation of the kingdom in 1898 — is so complicated that her anecdotal structure isn't quite up to the task. More fatally, though, Unfamiliar Fishes reveals the limitations of Vowell's arch style. It turns out that deadpan casualness may not be a useful stance from which to approach the story of the death of a nation — especially when those wounds are still raw and bleeding.

In 1778, Captain Cook, the first European on Hawaiian shores, met his death on the Big Island, and that was just about the last time that Kanaka Maoli — Native Hawaiians — came out ahead in their interactions with the haoles (outsiders) who would soon flood the islands. Missionaries came to save the Hawaiians' souls; whalers laid waste to the harbor towns during shore leave; sugar-cane magnates acquired enormous tracts of land. Ravaged by disease and starvation, the native population — estimated at 300,000 when Cook landed face-down in Kealakekua Bay — plummeted in just over a hundred years to about 40,000.

Vowell's strongest storytelling comes early in Unfamiliar Fishes, as she follows the New England families — branches from the Puritan tree whose roots she explored in her last book — who set up the islands' first Christian missions. Vowell is sympathetic to the missionary wives, whose letters and diaries help them become vivid characters; it took real bravery to sail to the hinterlands, concerned only for the spiritual well-being of strangers. (She is less impressed by missionaries, whom she broadly paints as "haole nerds" drunk on "Jesus juice.")

But Vowell is less surefooted in dealing with the tangled web of interests and allegiances that led to the islands' annexation, turning the book's last 50 pages into a torrent of names and dates. A reader not previously versed in Hawaiian history would be lost; on the other hand, it's hard to imagine what a reader who is versed would find of interest in this truncated retelling. A subject as complex, and charged, as the Hawaiian annexation deserves a popular history that takes the time and care to unravel it properly.

For the people of Hawaii, the United States takeover is still a very live issue, a point Vowell glancingly makes but one that deserves a fuller airing. Does that mean Vowell should be careful not to hurt feelings? Of course not. (Her frank discussion, for example, of the shortcomings of Hawaii's last king, David Kalakaua, might be poorly received on the islands, but it serves the book well.) But it does mean that her tourist's view of history feels out of tune with the story at hand — verging, at times, on callow.

From the beginning — an awkward passage waxing rhapsodic about the 1987 teen surfing drama North Shore — Vowell positions herself, and her readers, as outsiders to Hawaiian culture. (Early on, she describes Honolulu's Iolani Palace as a "historic site we have forgotten entirely"; a Native Hawaiian might respond quoting the old Lone Ranger joke: "Who you calling 'we,' kemosabe?") And of course Vowell is an outsider, as is every white person who has ever written about the islands. But there is little of the journalist's honest attempt to understand the world in Unfamiliar Fishes, to bring readers in; too often, Vowell maintains her poker face, unwilling to dig into the thorny details of what, truly, makes Hawaiian culture so valuable that it's worth writing an entire book about its loss. 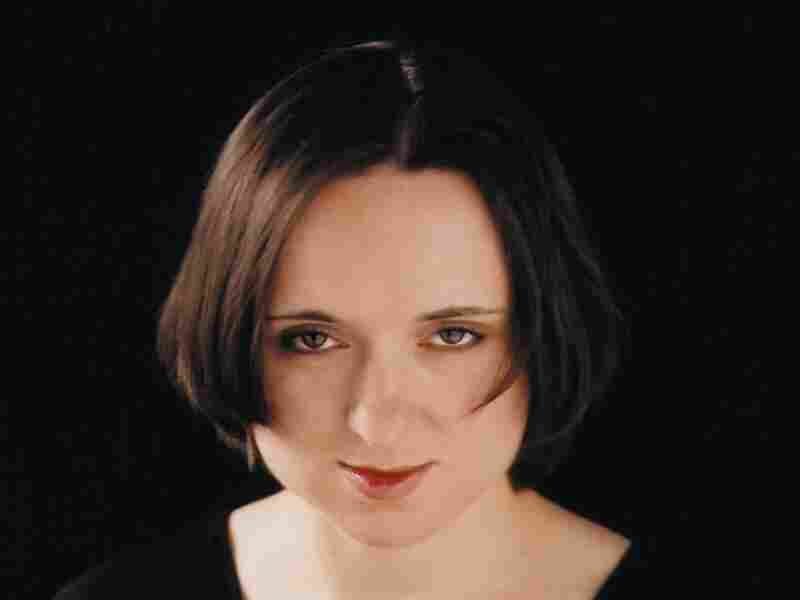 Sarah Vowell has written several books on American history and culture, and was a contributing editor for the radio program This American Life from 1996–2008. Bennett Miller/ hide caption 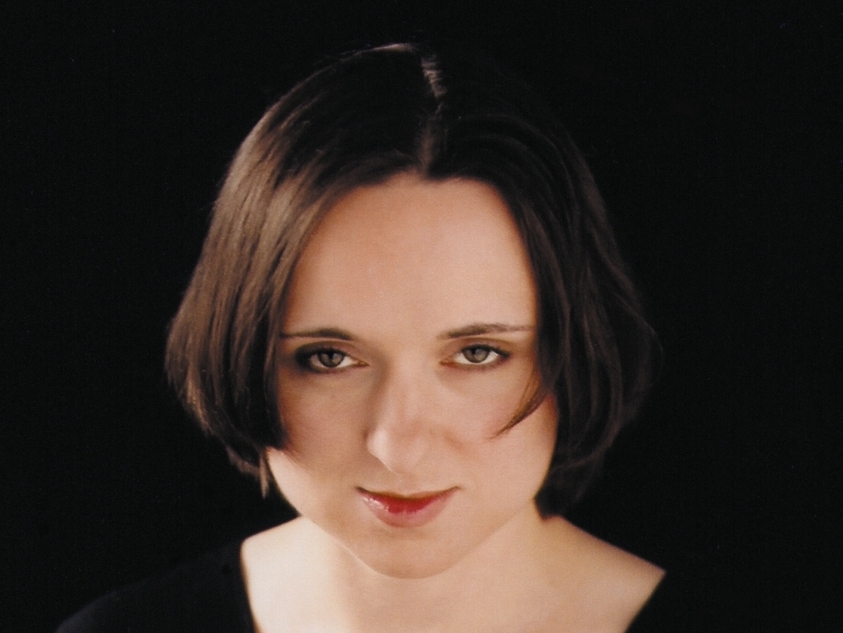 Sarah Vowell has written several books on American history and culture, and was a contributing editor for the radio program This American Life from 1996–2008.

Instead, there's just Sarah Vowell, bopping from museum to museum, sometimes quoting tour guides for paragraphs on end. And not just tour guides! Vowell is quick to cede her voice to other authors, to academics, to "a hula dancer friend from Maui" or a woman who worked in the Lahaina courthouse or "a man behind us in line" or "my friend Sherm." It's frustrating, because when she tries, Vowell is certainly capable of insight. For example, she is thoughtful in casting the initial encounters between starchy missionaries and Kanaka Maoli less as "some sort of clunky prequel to Footloose," but as the meeting of two very different kinds of traditionalists — a smart point, and a sympathetic one.

And she's good at connecting the dots in ways that make history vivid for her readers. Take the "exotic foliage" she notices planted in an iron try-pot — once used for rendering whale oil, then for boiling sugar cane. "Nearly two centuries of Hawaiian economics bloomed from that kettle," she writes, "from whaling, to sugar, to tourism." Where does Vowell make this terrific observation? "On the grounds of a plush resort on Maui," of course.

Dan Kois is the author of Facing Future, about the Hawaiian musician Israel Kamakawiwo'ole. He lives in Arlington, Va., and writes for The New York Times, New York magazine, Slate, the Washington Post and other publications. 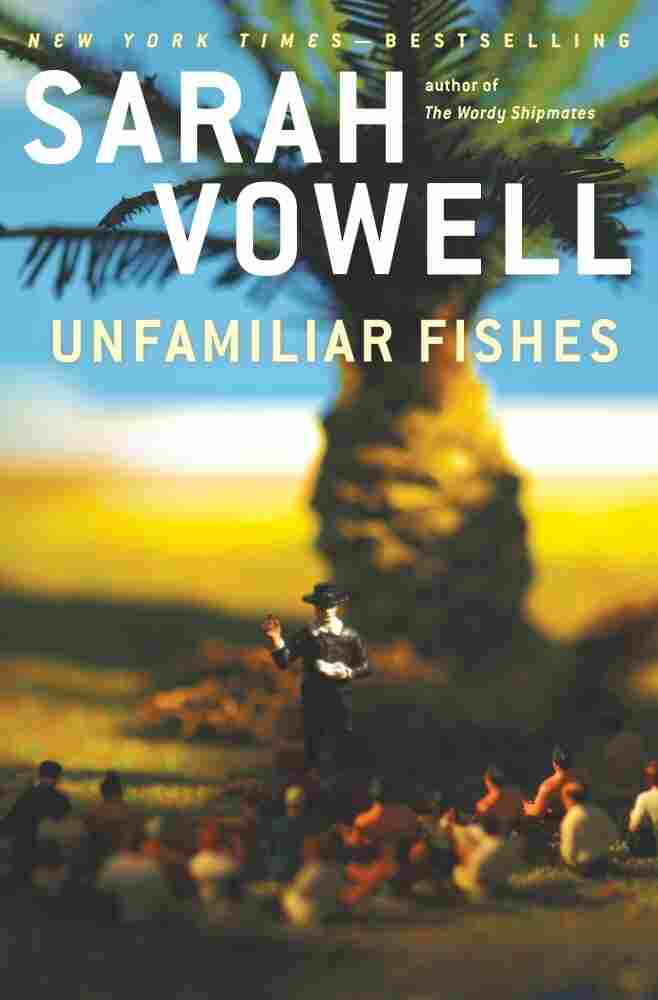 In certain ways, the Americanization of Hawaii in the nineteenth century parallels the Americanization of America. Just as their Puritan forebears had set off on their errand into the wilderness of New England, the New England missionaries set sail for the Sandwich Islands, a place they thought of as a spiritual wilderness. Just as perhaps nine out of ten natives of the Americas were wiped out by contact with European diseases, so was the native Hawaiian population ravaged by smallpox, measles, whooping cough, and venereal disease. Just as the Industrial Revolution and the building of the railroads brought in the huddled masses of immigrants to the United States, the sugar plantations founded by the sons of the missionaries required massive imports of labor, primarily from China, Japan, Korea, Portugal, and the Philippines, transforming Hawaii into what it has become, a multiethnic miscellany in which every race is a minority.

Hence the plate lunch. Two scoops of Japanese-style rice and one scoop of macaroni salad seemingly airlifted from some church potluck in Anywhere, U.S.A., are served alongside a Polynesian or Asian protein such as kalua pig, chicken adobo, teriyaki beef, or Loco Moco (a hamburger patty topped with gravy and a fried egg, a dish presumably invented to remedy what has always been the hamburger's most obvious defect—not enough egg).

Sugar plantation workers used to share food at lunchtime, swapping tofu and Chinese noodles for Korean spareribs and Portuguese bread. That habit of hodgepodge got passed down, evolving into the plate lunch now served at diners, drive-ins, and lunch trucks throughout the Hawaiian archipelago.

In 1961, the late Seiju Ifuku established the Rainbow Drive-In, the joint on the edge of Waikiki where I bought my plate lunch. Ifuku had been an army cook with the One Hundredth Infantry Battalion. The mostly Hawaii-born Japanese-American volunteer soldiers in the One Hundredth and the 442nd Regimental Combat Team served as segregated troops in Europe and North Africa during World War II, becoming the most decorated unit in U.S. military history and earning the nickname the "Purple Heart Battalion." Their motto was "Remember Pearl Harbor." Their argument was that they were Americans, not, as the U.S. government classified them and their families, "enemy aliens."

Rainbow Drive-In's menu, offering teriyaki, hot dogs, mahimahi, and Portuguese sausage, reads like a list of what America is supposed to be like—a neighborly mishmash. Barack Obama, the Honolulu-born president of the United States, mentioned once on a trip home his craving for plate lunch, listing Rainbow Drive-In as a possible stop. Makes sense, considering that his Kansan mother met his Kenyan father at the University of Hawaii and his mother's remarriage blessed him with a half-Indonesian sister. He's our first plate-lunch president.

I suppose the double-sided way I see the history of Hawaii—as a painful tale of native loss combined with an idealistic multiethnic saga symbolized by mixed plates in which soy sauce and mayonnaise peacefully coexist and congeal—tracks with how I see the history of the United States in general. I am the descendant of Cherokees who were marched at gunpoint by the U.S. Army to Oklahoma on the Trail of Tears. (Incidentally, the Cherokees were Christianized and educated by the American Board of Commissioners for Foreign Missions, the very same New England organization that Christianized and educated the Hawaiians.) Yet I am also, and mostly, the descendant of European immigrants, notably Swedish peasants who left for Kansas for the same reasons Asian and Portuguese plantation workers sailed to Hawaii.

Whenever I eat plate lunch, I always think back to the lore of my Swedish great-grandfather's voyage across the Atlantic. Supposedly, the only food he brought with him on the ship was a big hunk of cheese. Then he befriended a German in steerage whose only food was a big hunk of sausage. The Swede shared his cheese with the German and the German shared his sausage with the Swede.

Growing up, I came to know America as two places—a rapacious country built on the destruction of its original inhabitants, and a welcoming land of opportunity and generosity built by people who shared their sausage and their cheese. 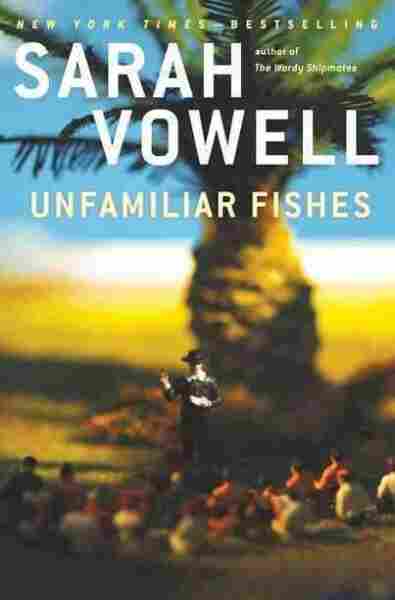