Accessibility links
Raising 'Hell' In Dramatic Richard Burton Style What could be more embarrassing than an obsession with a star? For author Jon Reiner, it's not the glamorous Elizabeth Taylor who occupies his thoughts — it's her sometimes husband, Richard Burton. In Hellraisers, Reiner finds his boundless hunger for the leading man satisfied — almost. 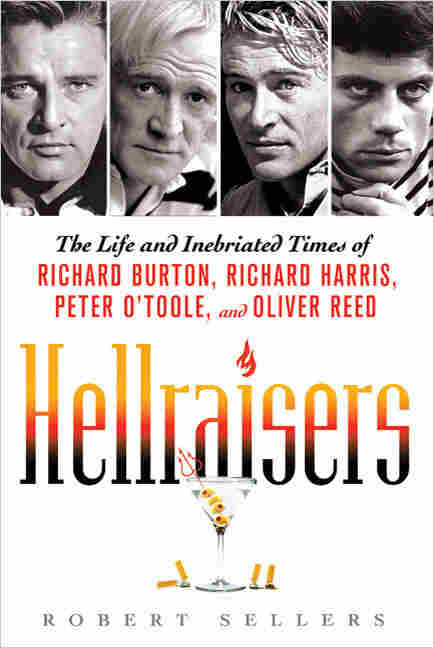 The week that Elizabeth Taylor died, I was a guest at a dinner party where the notorious gossip of her life swung around the table at a dizzying clip. When the talk, inevitably, turned to husband numbers five and six — Richard Burton — I pounced.

All night I'd been waiting, wanting, churning to talk about Burton, to share my private obsession, and talk I did. After 10 minutes, by which time I'd not even made it out of the Welsh coal mine with Burton's father, one of the guests cut me to the quick: "Why are you obsessed with Richard Burton?" The roast chicken on my plate was getting cold, and my wife was kicking me under the table, so I offered the shortest answer I could think of: "Read Hellraisers."

I'd received Hellraisers: The Life and Inebriated Times of Richard Burton, Richard Harris, Peter O'Toole, and Oliver Reed a few months earlier as a birthday gift from an old friend and fellow Burtonologist, but had approached the new book with enormous reservations. You see, Burtonologists know that the definitive story was written by the man himself in his posthumously published diary (Richard Burton: A Life.) How could any author improve upon the private confessions the most brilliant, charming, conflicted, self-destructive rogue of the century made in his own hand? 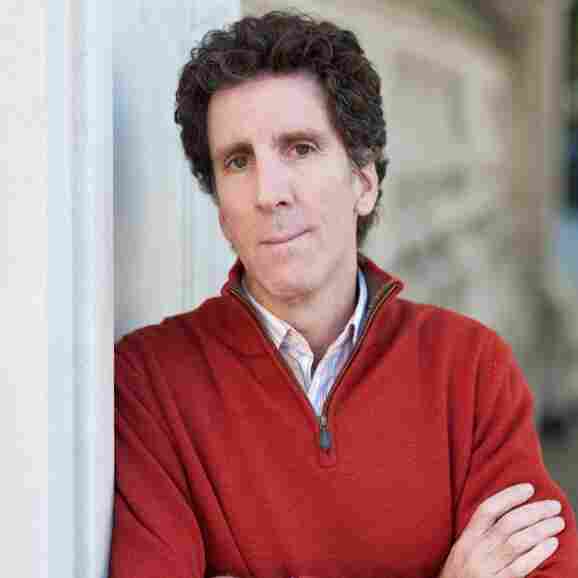 Jon Reiner is the author of the forthcoming book, The Man Who Couldn't Eat. Ellen Dubin hide caption

Yet, as I read Robert Sellers' rollicking Hellraisers, my guard softened into the pleasures of a perfect three-minute egg: incomparably thrilling, satisfying and delicious on the way down.

Sellers delights in channeling the horse-choking episodes of drinking, carousing, fighting, cocksmanship and occasionally acting that burnished the hell-raisers' reputations. In my reading and rereading and howling over one outrageous tale after another, I became enthralled by the book and Sellers' enthusiasm.

Conceptually, Sellers' inspired step was to free Burton's legacy from the burdened isolation of fallen idol and make him the leader of a clan. The scenes depicting their affection, hero worship and competitive hell-raising for the trailblazing Burton bind the book into more than simply a collection of great drunks (which would be satisfying enough). They connect the flash points on a map from a lost and covetously exciting world. The four hell-raisers were creatures of an unapologetic age unlike our own, bent on blowing away the ashes of World War II.

The hell-raisers had a hell of a good time, and so did I, drinking in Sellers' musically colloquial and blokey prose, toasting lives so different from my own. When I was through devouring the book, it wasn't enough for me to have read it: I wanted to live it.

My Guilty Pleasure is edited and produced by Ellen Silva with production assistance from Rose Friedman and Lacey Mason.

Chapter One: An Aperitif

Throughout the history of movies there have always been hellraisers; actors and booze go together like Rogers and Hammerstein or eggs and bacon. Film producer Euan Lloyd, who worked over the years with Frank Sinatra, Robert Mitchum and Dean Martin, says that drinking simply went with the job. 'Whether it was lack of confidence or just habit, it was hard to tell, but a destroyer could comfortably swim in the ocean of liquid consumed by actors.'

Lloyd's association with Burton and Harris was the boy's own adventure, perhaps the archetypal hellraiser movie, The Wild Geese, which also starred veteran boozer Stewart Granger and Roger Moore, himself not averse to a bit of elbow-bending, but able to hold it more than most. By 1978, after decades on the piss, Burton and Harris were mere shadows of their former selves. One day during a break in filming they sat together under the African sun reminiscing and trying to make sense of their lives. 'We were like two old men,' Harris said. 'Once the greatest hellraisers in the world, we were now too tired to stand up and pee. After two hours of philosophical discussion, we came to the conclusion that the tragedy of our lives was the amount of it we don't remember, because we were too drunk to remember.'

So why did they do it, Burton, Harris, O'Toole and Reed, why did they drink themselves to death, or – in the case of O'Toole – come within a hairsbreadth of it? Burton said it was 'to burn up the flatness, the stale, empty, dull deadness that one feels when one goes offstage.' More likely it was to get over the realization that he was appearing in a piece of shit. Nor was he averse to getting pissed on the job. Maybe it went hand in hand with his reputation as a legendary womanizer: not long after starting his infamous affair with Elizabeth Taylor on the set of Cleopatra, Richard Burton answered the phone at her home. It was Taylor's husband, Eddie Fisher, demanding to know what he was doing there. 'What do you think I'm doing?' Burton replied. 'I'm fucking your wife.' Probably emptying his drinks cabinet, as well.

Burton's intake was prodigious. At the height of his boozing in the mid-70s he was knocking back three to four bottles of hard liquor a day. On The Klansman he was drunk for the entire production. 'I barely recall making that film,' he confessed. Burton loved the sheer sociability of booze, drinking in pubs, talking with mates and sharing stories; he was a man who enjoyed life better with a glass in his hand. After sex it was the thing he loved most in life. Coupled with his nicotine addiction – it's rumoured he smoked 50 a day – Burton embraced that seemingly inbred Celtic desire to walk dangerously close to the precipice perhaps more than anyone.

Harris too loved the communal nature of boozing. He loved nothing better than going into a pub on his own and by the end of the evening being surrounded by a new gang of boisterous pals. 'Men, not women,' he'd state. 'Boozing is a man's world.' For years Harris habitually drank two bottles of vodka a day. 'That would take me up to seven in the evening, then I'd break open a bottle of brandy and a bottle of port and mix the two.' Asked by a reporter once to describe how much booze he'd consumed over his lifetime Harris was only exaggerating mildly when he replied. 'I could sail the QE2 to the Falklands on all the liquor I drank.'

There was also an element of being the naughty schoolboy about Harris's drinking, of showing off. 'I adored getting drunk and I adored reading in the papers what I had done the night before.' He knew full well what he was doing by getting pissed all the time and ending up in police cells or brawling in public, but didn't think it that awful. Neither did he hate himself for it in the morning or feel guilty. No, Harris just believed that the world and too many people in it were boring old farts and his mission was to live life to the fullest and spread a little joy around. 'So I did, and damn the consequences.'

O'Toole was another who loved the social life of a drinker, propping up bars in Dublin or London, nattering with saloon-bar poets and philosophers, putting the world to rights. 'But I don't really know what I get out of it,' he once said. 'What does anyone get out of being drunk? It's an anaesthetic. It diminishes the pain.' O'Toole would drink to excess for no good reason, as he became intoxicated quite quickly due to the delicate state of his insides; he suffered from ill health most of his life, particularly from intestinal pain.

Naturally eccentric, the drink merely compounded the affliction, and fame when it came threw a spotlight on it so all the world could gawp and gasp at his escapades. This was a man who travelled the world yet never wore a watch or carried a wallet. Nor upon leaving home did he ever take his keys with him. 'I just hope some bastard's in.' More than once, on the occasions when someone was not, O'Toole had to explain to the police why he should be breaking into his own property.

There was an undercurrent of violence to his drinking, too. At his hellraising peak the gossip columns were filled with accounts of booze-fuelled antics: a brawl with paparazzi on the Via Veneto in Rome, a fistfight with a French count in a restaurant, his fleeing Italy on the eve of being arrested, even the beating up of a policeman. O'Toole's social life often was in danger of eclipsing his talent. 'I was silly and young and drunken and making a complete clown of myself. But I did quite enjoy the days when one went for a beer at one's local in Paris and woke up in Corsica.'

For Reed, like Burton and Harris, it wasn't so much drinking he loved but the fact that it took place in pubs. He loved the companionship, the camaraderie with other men, the chance to challenge people to drink contests or bouts of arm wrestling. All his life he preferred the friendships he made in pubs to those on a film set. 'You meet a better class of person in pubs.' 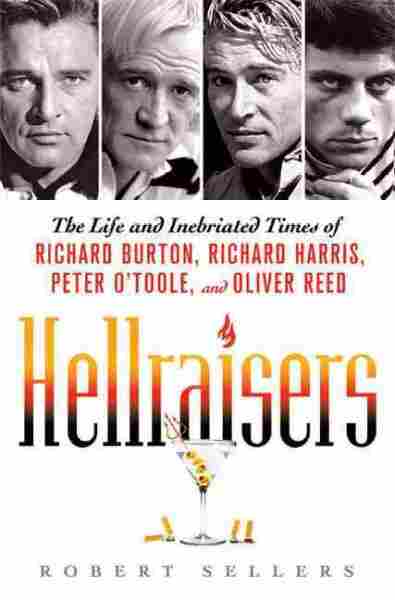