Accessibility links
U.S. Quietly Halts Scholarship For Afghan Students The program sent Afghan students to U.S. high schools for a year, but many fled to Canada seeking asylum and fearing a dark future in Afghanistan. One student who left Texas for Toronto said his family received threats for sending their son to the West and thought he'd be in danger if he returned. 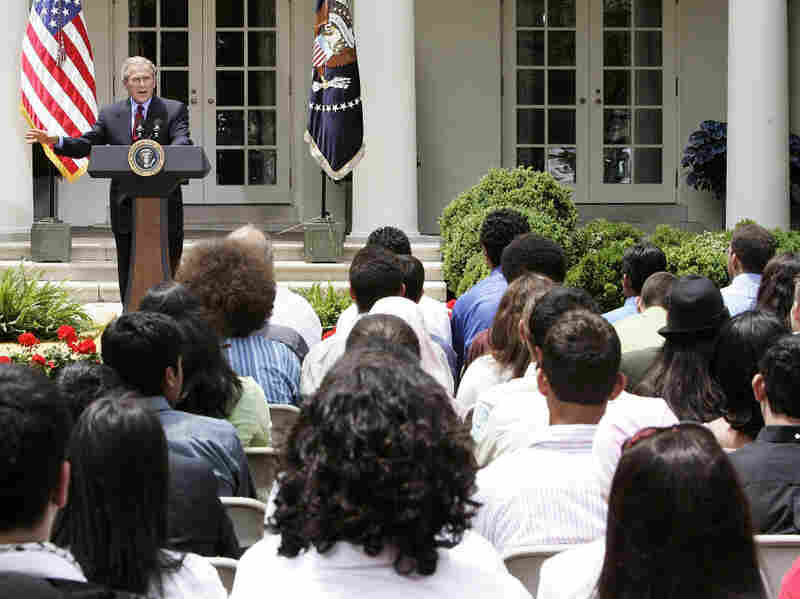 Former President George W. Bush speaks to student from the Youth Exchange and Study program at the White House in 2005. The program began in 2004 and ended for Afghan students this year after half of those enrolled fled to Canada. Alex Wong/Getty Images hide caption 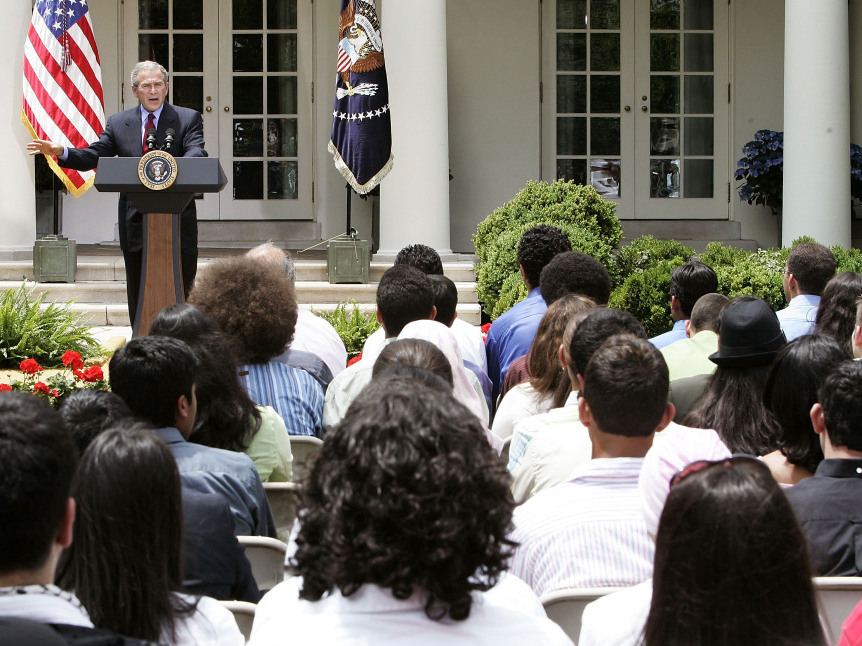 Former President George W. Bush speaks to student from the Youth Exchange and Study program at the White House in 2005. The program began in 2004 and ended for Afghan students this year after half of those enrolled fled to Canada.

One program brought hundreds of Afghan high school students to small communities in the U.S. beginning in 2004.

But this year, the U.S. has quietly suspended the popular youth exchange. The reason? Fear of a dark future in Afghanistan was prompting too many of the students to bail out of the program and seek asylum elsewhere.

Deciding To Flee To Canada

When Afghan high school student Sam, whose name has been changed, won a prestigious spot in the U.S. State Department's Youth Exchange and Study program, known as the YES program, he had no intention of becoming a refugee. Sam was a few months into a school year in San Antonio when the first worried call came from home.

"It's just, my mom ... she thought I'd be in danger if I returned to Afghanistan," Sam says.

Sam spoke to NPR at a noisy shopping mall in his new home, Toronto. He left Texas in April 2009 and crossed into Canada, which has a government program for minors seeking asylum.

The calls from home had gotten worse. The local mullah had lectured Sam's father about allowing his son to be corrupted in the West, and then his family says it started getting threats.

Sam's family members are Hazaras, a Shiite minority in Afghanistan that in the past were singled out for persecution by the Taliban. With talk of a U.S. troop drawdown, Sam's family told him to stay in the West, and perhaps help them escape someday.

"I miss my family, especially my mom, because every time I talk to her on the phone she just starts crying. I don't miss Afghanistan, but I miss my family a lot," he says.

Eliyas Saalami, an alumnus of the YES program

Sam's case is far from unique, and what started as a small leak of students jumping the program soon became a torrent. Last year, half the students on the program fled to Canada to claim asylum. This winter, the State Department quietly suspended the YES program — with great sorrow, says Matt Lussenhop of the U.S. Embassy in Kabul.

"We certainly had to weigh the cost and benefit, because the benefit of these kids coming back is huge, really huge. But the cost of them not coming back is also huge for this country. This year, we decided that the costs are outweighing the benefits," Lussenhop says.

The program was beginning to constitute a brain drain of Afghanistan's talented youth, says Lussenhop. But he says he hopes the program can be revived again, since the students who return to Afghanistan bring great talent, experience and usually a long-lasting connection with the U.S.

Alumni of the program also hope it will be revived. Eliyas Saalami, who was an exchange student in Seattle, says he is angry at the kids who skipped out and ruined it for the others. Though he was sometimes within walking distance of the Canadian border, he didn't cross.

"I got this opportunity to experience a year of being [an] exchange student in America. If I come back to Afghanistan ... I would be able to help my fellow Afghans and also this program will go on for longer. That was my agreement with myself," he says.

Saalami had just the kind of experience the program is designed for. Before he went to the U.S., his head was full of questions and stereotypes about Americans planted by friends and teachers in Afghanistan.

'I Don't Blame Them For It'

Another alum from the program, Zia Maliki, went to high school near Dayton, Ohio, back in 2006. During his year, only a few students fled to Canada; Maliki says it's because five years ago the Taliban insurgency wasn't as bad, and the departure of Americans troops wasn't imminent.

That's doubly true for the young women who experience living in the U.S.

"Personally, myself, I liked it better there than here. It's easier to be a woman in [the] States than here," says Meetra Alakozy, who did her senior year of high school in Colorado last year.

In my group, there were two [sisters] who were from Jalalabad and they both went to Canada. ... I'm pretty sure it was because if they go back to Jalalabad, then people will create problems for them just because they've been to [the] States.

Meetra Alakozy, an alumna of the YES program

Alakozy says she is angry with the students who fled and ruined the chance for others to go. But at the same time she understands.

"I don't blame them for it. In my group, there were two girls who were from Jalalabad and they both went to Canada — they were sisters. ... I'm pretty sure it was because if they go back to Jalalabad, then people will create problems for them just because they've been to [the] States, and it's a very restricted area — girls don't go out a lot and stuff," Alakozy says.

In much of Afghanistan, simply having been to the United States is enough to taint the reputation of a young woman, and in many cases parents pressure their children not to return home. That pressure might increase with U.S. troops starting to leave this summer. The U.S. Embassy's Lussenhop says America will support Afghanistan long after the troops leave, despite rumors to the contrary.

"Its part of the overall misperception about, oh my god, the Americans are leaving. ... The transition is going to be spread out over a period of years. ... We're not going to abandon Afghanistan," Lussenhop says.

Embassy officials say they want to restart the YES program, but only if they can ensure students won't jump the program to claim asylum.

That may be difficult until the students and their families gain some confidence that Afghanistan has a brighter future.