Accessibility links
The Man Behind The GOP's No-Tax Pledge One person with outsized influence in the debt-ceiling debate is not at the negotiating table. Anti-tax advocate Grover Norquist wants to hold Republicans to their pledge not to raise taxes — even if he leaves a little gridlock in his wake.

One person with outsized influence in the debate over raising the debt ceiling is not at the negotiating table. Instead, he sits in downtown Washington at the offices of Americans for Tax Reform, a group he has run for a quarter century. From there, Grover Norquist fields phone calls and emails from some of the people who are at the table, and he holds them to their pledge. 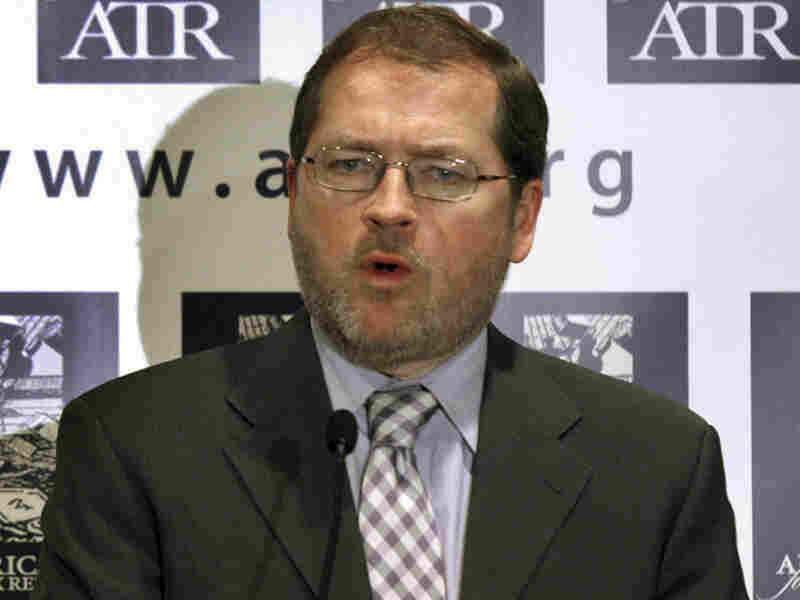 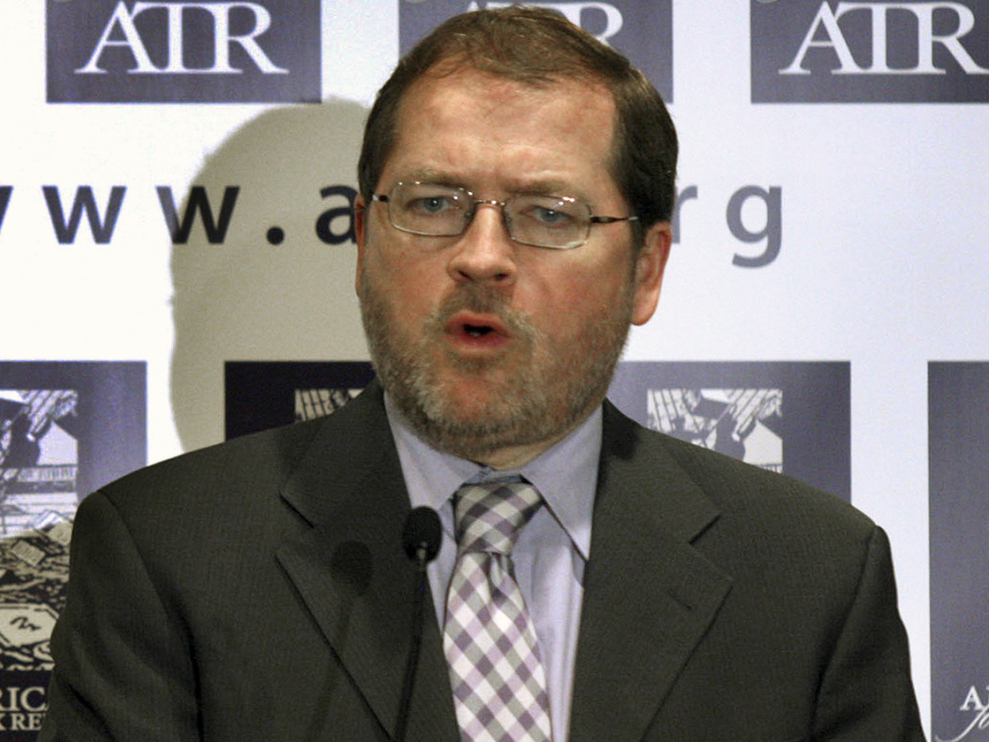 "The pledge" is a promise not to raise taxes. It is considered mandatory for many Republican candidates. Most Republican members of the House and Senate have signed it, as have many Republicans in statehouses across the country. The man who created it seems to Washington insiders like a constant. Norquist has been a fixture in every major important tax debate for decades.

But when he started in politics in the 1960s, communism-fighting was his thing. Eventually he turned one eye to the size of the U.S. government.

"When the Soviet Union went away, it became time to focus even more on keeping the American government to a small size," he said during an interview Tuesday.

Norquist has never been a numbers wonk. He's not the kind of guy who pores over complicated tax formulas. "I was a math guy as a kid," he says. "I was really good at math. I wasn't particularly interested in it."

He describes the most important element of math in his line of work as this symbol: <

Taxes became Norquist's sole focus when President Reagan asked him to run Americans for Tax Reform in 1985. The group says its money comes from individuals and companies, but the donor list is not public.

It's not that he's created an anti-tax allergic reaction within the Republican Party. It's that he's been able to define anything that takes away tax subsidies for corporations as a tax increase.

Norquist's pledge gained strength after presidential candidate George H.W. Bush signed on in 1988. When President Bush later broke the "read my lips" promise in 1990, it sent a message, says Norquist.

Today most of the Republican Party charts its course on taxes using Norquist as an unmoving North Star. To Democrats, he is the roadblock standing in the way of compromise on the debt ceiling negotiations.

President Obama could have been speaking directly to Norquist at Monday's White House news conference when he said, "If each side takes a maximalist position, if each side wants 100 percent of what its ideological predispositions are, then we can't get anything done."

But there is a question as to whether Norquist is the cause or the effect — whether he created the Republican Party's stance on taxes or just expresses it.

According to this reasoning, the pledge not to raise taxes has power only because the Republican Party and voters give it power. Lawmakers who break the pledge can lose their seats only if people care enough about that broken promise to vote accordingly.

But historian Joe Thorndike of the group Tax Analysts says that description misses something important. Thorndike argues that Norquist the Enforcer has moved the Republican Party solidly to the right.

"I think what Grover managed to do was to take something which is sort of amorphous and not prone to being pinned down very well, which is political rhetoric, and he found a very public, very convincing way to create some accountability behind rhetoric," he says.

Other groups across the ideological spectrum have tried to hold lawmakers to their promises on other issues, but almost none has been as successful as Americans for Tax Reform. Norquist believes that's because other issues have many facets. In contrast, "The tax issue, size of government, has one," he says. "Up or down, yes or no. It's binary."

Sometimes the black and white of taxation can look a little gray. Lawmakers have been known to come to Norquist seeking guidance on whether a specific bill fulfills the pledge or not.

Norquist waves these questions aside. "The pledge is always clear-cut," he says. "The only time people come and ask me whether something is or isn't a tax increase is when they know G.D. well it is a tax increase and they're hoping to slip it past."

That unblinking certainty is one of many things that drives Norquist's critics up the wall. They say he lives in a world without nuance. To him, a vote to eliminate loopholes and corporate giveaways is only permissible if lawmakers cut an equal amount in taxes elsewhere.

"That's what's amazing about Grover Norquist," says Neera Tanden of the liberal Center for American Progress. "It's not that he's created an anti-tax allergic reaction within the Republican Party. It's that he's been able to define anything that takes away tax subsidies for corporations as a tax increase."

To Norquist, it all comes back to the "less than" symbol. His goal is not to perfect the tax code. He doesn't aspire to make government work better. For him, tax cuts are a means to the end of shrinking government. "Our job," he says, "is to make people free."