Accessibility links
Boycotting Murdoch Could Be Harder Than You Think Want to join the Facebook and Twitter crowds eager to make media mogul Rupert Murdoch pay for the hacking scandal? Prepare to give up Hulu, American Idol and the Los Angeles Lakers, too.

Boycotting Murdoch Could Be Harder Than You Think

Boycotting Murdoch Could Be Harder Than You Think

When troubled media mogul Rupert Murdoch shuttered his News of the World tabloid in the wake of the U.K. phone-hacking scandal, he might have hoped it would help end the crisis quickly.

Want to boycott Murdoch? You'll have to give up all these Murdoch holdings. Allison Lenz/NPR hide caption

But the move only stirred anger in the online world. Facebook users organized a handful of groups aimed at exacting revenge by boycotting Murdoch and his British newspaper publishing company, News International, a subsidiary of Murdoch's behemoth News Corp. One page, called "Boycott News International," issued a clarion call:

"Don't buy the News of the World, The Sun, The Times, The Sunday Times, cancel Sky = A clear message to Murdoch."

On Twitter, a BoycottMurdoch account launched before the hacking scandal is drawing more followers. (The effort is still small — it has fewer than 800 followers and 125 tweets so far.) And on Wednesday, after Murdoch withdrew his bid for BSkyB, hashtags for #Murdochout and #boycottsun revealed a stream of jubilant comments.

But Murdoch's vast holdings, especially in the United States, make it challenging to carry out a boycott in a way that truly hurts his bottom line.

Some protesters realize it may be tough to exact real financial pain. Chris Coltrane, a comedian and self-described "geek socialist," has staked out the domain www.boycottmurdoch.com, where he plans to launch a full-fledged site soon. 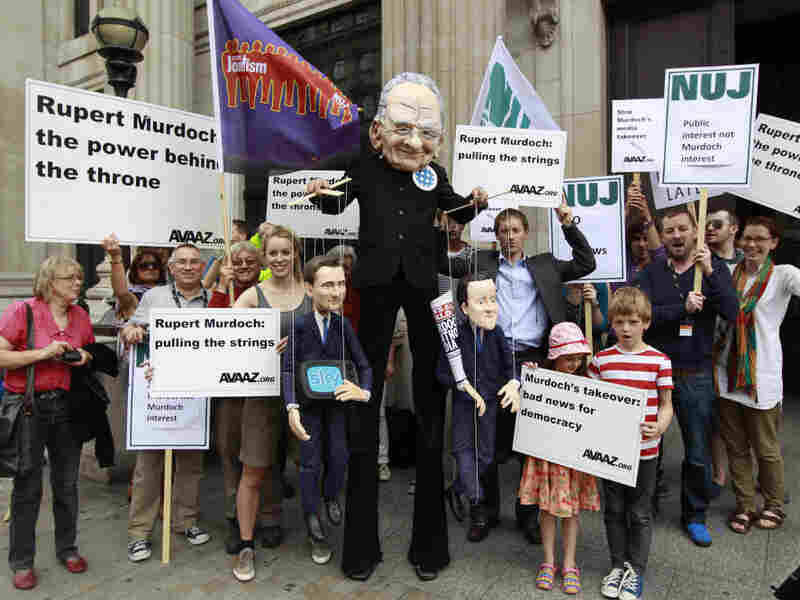 Coltrane remains pragmatic about its goals. As he put it in an email to NPR: "In practice, Murdoch's empire is so vast that we know this [a Murdoch boycott] isn't always practical. In fact, we dare say that it's almost impossible, without relentless dedication. ... Because of that, we are asking people to boycott Rupert Murdoch as much as possible. Do as much as you can to not give Murdoch money."

Coltrane says he's been planning the campaign for a while to protest what he calls Murdoch's "unaccountable power," but the recent hacking scandal pushed him over the edge. He wants people to vote against Murdoch with their wallets now, even if a total boycott may never happen:

"If we can convince people to boycott Murdoch completely, we'll be delighted. But even if we can only get people from 40 percent to 80 percent, that will still be a definite victory."

A representative from News Corp. declined to comment on the brewing boycotts.

But all this raises a question: How much would it really take to boycott Rupert Murdoch and his News Corp. empire? It might be a lot harder than you think.

If we can convince people to boycott Murdoch completely, we'll be delighted. But even if we can only get people from 40 percent to 80 percent, that will still be a definite victory.

Here are a few things you couldn't do if you were engaging in a complete boycott of all things News Corp.:

Still, there's one bright spot for would-be Murdoch boycotters who also happen to be Super Bowl fans. Fox, which frequently broadcasts the big game, and did so this January, isn't scheduled to broadcast a Super Bowl again until 2014. So, you can get your pigskin fix and stick it to News Corp. at the same time, at least for a few more years.