Accessibility links
New Republic: In Defense Of 'Marriage Vow' Passage A pledge produced by a Christian group came under fire, along with the Republicans who signed it, for its controversial passage about more two-parent black families during slavery than in modern times. John McWhorter of The New Republic believes the passage makes a noteworthy observation. 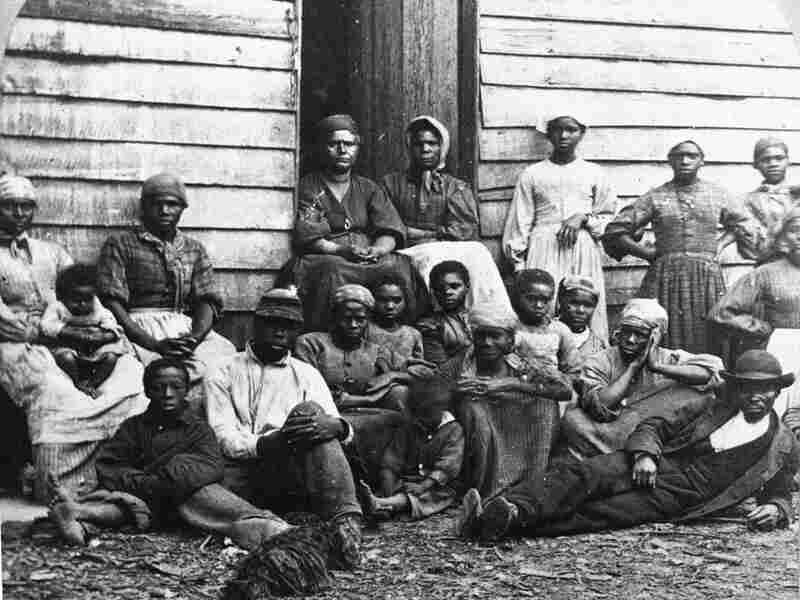 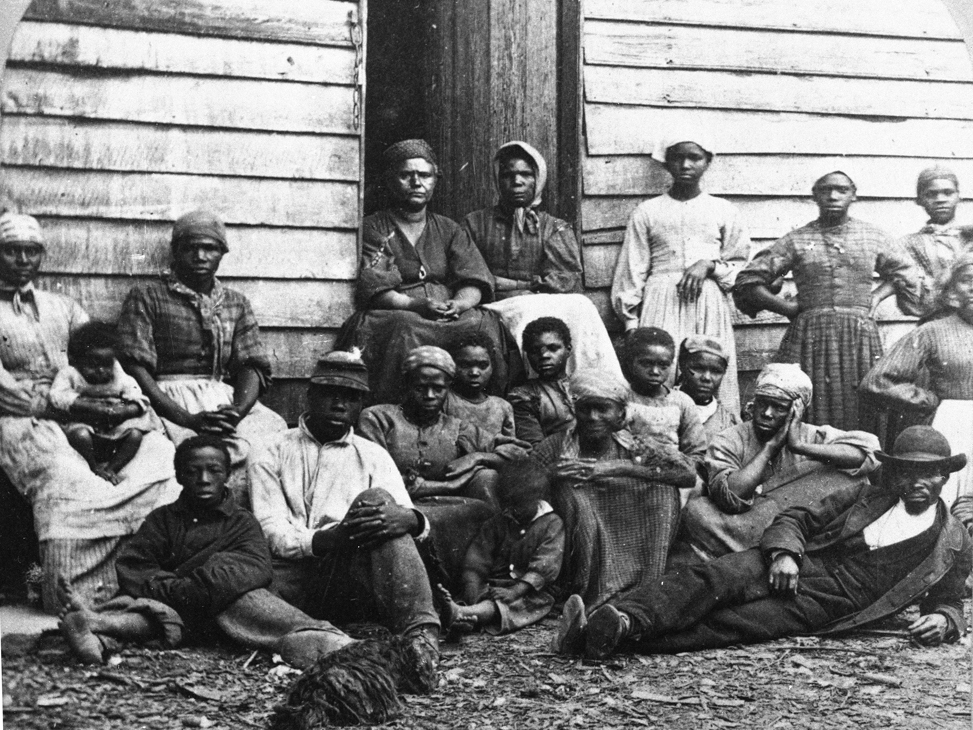 Civil War fugitive slaves who were emancipated upon reaching the North, sitting outside a house, possible in Freedman's Village in Arlington, Virginia, mid 1860s.

John McWhorter is a contributing editor for The New Republic.

Michele Bachmann and Rick Santorum may have a number of things to be embarrassed about. However, supporting an observation that there were more two-parent black families during slavery than there are today is not one of them.

This observation was found in "The Marriage Vow," a conservative pledge produced by The Family Leader, a Christian group. It was signed, notably, by Bachmann and Santorum. "Slavery had a disastrous impact on African-American families," the pledge said, "yet sadly a child born into slavery in 1860 was more likely to be raised by his mother and father in a two-parent household than was an African-American baby born after the election of the USA's first African-American President." The Family Leader removed the passage after a public outcry. But, while the comparison to slavery might seem crude — and the full pledge, generally speaking, is bigoted and wrongheaded — there was an important truth in the now-erased sentence. It is a truth about the oft-forgotten toughness of black families during slavery and in the difficult decades after emancipation.

IT ONCE WAS fashionable to suppose that slavery had made the conventional family difficult to sustain because of spouses so often being sold away from one another and children being separated from their parents. A natural conclusion was that, after slavery, the old patterns persisted, especially given how difficult conditions continued to be for black people, and that this was an understandable precursor to the fatherless norm in inner-city black communities after the 1960s. There is, indeed, sociological literature showing that it was hardly unknown for black people to be raised by single mothers during slavery and afterward. In fact, over the last 150 years, there have always been proportionately more single-parent black homes than white ones.

However, as classic work by Robert Fogel and Stanley Engerman has shown, despite the horrors of slavery, overall, during the pre-emancipation era, about two-thirds of enslaved families had two parents — far more than today. More recent revisionist work has stressed that, while forced separations were always an important part of the picture, the two-thirds figure remained dominant (Wilma Dunaway is especially handy on this). And this tendency continued into the Jim Crow era, contrary to a false sense one might have of daily life in a black ghetto of the 1930s and '40s — think Richard Wright's 12 Million Black Voices or Claude Brown's Manchild in the Promised Land. Namely, it is wrong to suppose that, amid the misery of those neighborhoods, all but a sliver of children grew up without a dad. That is a modern phenomenon, whose current extent — fewer than one in three black children are raised by two parents — would shock even the poorest black folk 100 or even 50 years ago.

A standard reference on the subject by University of Minnesota historian Steven Ruggles in 1994 is most often taken as evidence of the uninteresting — that, gosh, in the old days poor black people didn't find single parenthood unusual. What is actually more important in its findings is that, from 1880 to 1960, fewer than one in three black children nationwide didn't grow up with two parents. Another key statistic, from Barbara Agresti in 1978, is that, just past emancipation, in 1870 in Walton County, Florida, about 57 percent of black children lived with two parents; just 15 years later, 89 percent did. Or, as St. Clair Drake and Horace Cayton told us in Black Metropolis, in Chicago in the 1920s, it was considered a problem that just one in seven black children were born to single mothers. What's more, that number went down during the Depression, not up.

Data like this are important because they show that the reason so few black children grow up without fathers today is not a mere matter of economics or, more graphically, because black men without college degrees find it so hard to get decent work that they abandon their children. After all, black people living under the vicious racism of 100 years ago nevertheless tended, very strongly, to form two-parent families.

Rather, what happens today is more a matter of what people in inner-city neighborhoods grow up seeing as normal (note my evasion of the loaded word culture, although for those who can stomach it, it is precisely what I mean). Plus, there is the sheer fact that, from the 1960s until 1996, expanded welfare policies made it possible to stay on welfare as a mother indefinitely without job training — impossible before the '60s, and much less common today in most states than it was before 1996. This is why a man could so easily leave kids he fathered to be raised alone — and unsurprisingly, starting in the 1970s, an unprecedented number did.

While maintaining all openness to nontraditional types of family, and while hardly pretending that being raised by one parent is itself a condemnation to despair, we can all admit that neighborhoods where fatherlessness is a norm will not do. That is, there remain neighborhoods today where, if a naive person said something assuming that a young mother she met had a husband at home helping her raise her children, it would seem almost amusing.

Let's try this: A neighborhood where every child had two parents would be a little odd and almost ominous. Except if it were a highly traditional religious community, one would suspect strangely stringent notions regarding compatibility and even sexuality. We don't need to go back to shotgun marriages. But the other extreme, where, in many neighborhoods, often nine in ten children's fathers have not been at home helping raise them, is just as bad. After all, evidence shows that, in general, a child is better off raised by two people, especially if poor.

AND THAT BRINGS us back to the Family Leader pledge, and the much-maligned passage. (Again, I'm not endorsing the pledge, which, among other things, opposes gay marriage; I'm speaking only of the slavery passage that has caused such a stir.) If the aim of the sentence was to foster more two-parent families in black America, then there is not a single black person who could say this is anything less than a humane goal. Many will be put off by the conservative Christian aspect of Family Leader — but then, we must recall that a great many black people would not be, as black Americans are a deeply Christian people. Others will be put off by the fact that Republicans were the signers — but then, one might ask why Democrats supposedly interested in black concerns would be so much less interested in there being more black kids raised by two parents.

Of course, part of the problem with the slavery passage is its location of the present specifically under President Obama. But, in general, this is just boilerplate anti-Democratic rhetoric. Although one could question how pro-black-family the Obama administration is, with its cavalier attitude toward funding for vocational school and community colleges, despite initial promises to step up the latter in particular, the president certainly has not actively set back the cause of two-parent black families. As president, for instance, he has launched a fatherhood initiative.

One also senses that many see in the passage an implication that slavery was somehow good. This interpretation, however, is hasty and mistaken: The purpose of the passage is to show that, despite slavery being the horror that it was, for those enduring it, the two-parent family was a norm. If one feels that the modern media debate is short on intellectual substance and nuance, then one only becomes part of the problem in reading the passage as simply praising slavery.

The factual essence, then, of the now-infamous line in The Family Leader's pledge represents a truth that all should take to heart: Black people, like all human beings, are capable of great resilience in the face of difficulty; and culture — there, I said it — is not just a lockstep response to the GDP or racism. This is the lesson we should learn from how uncommon single parenthood was among black people familiar with slavery, lynching, and Jim Crow.