Accessibility links
'The Instructions': A Thousand-Page Debut Splash Adam Levin's hulking debut novel joins the ranks of other thousand-page books that have earned a lot of media buzz. But is it really worth hours of your time?

'The Instructions': A Thousand-Page Debut Splash

'The Instructions': A Thousand-Page Debut Splash 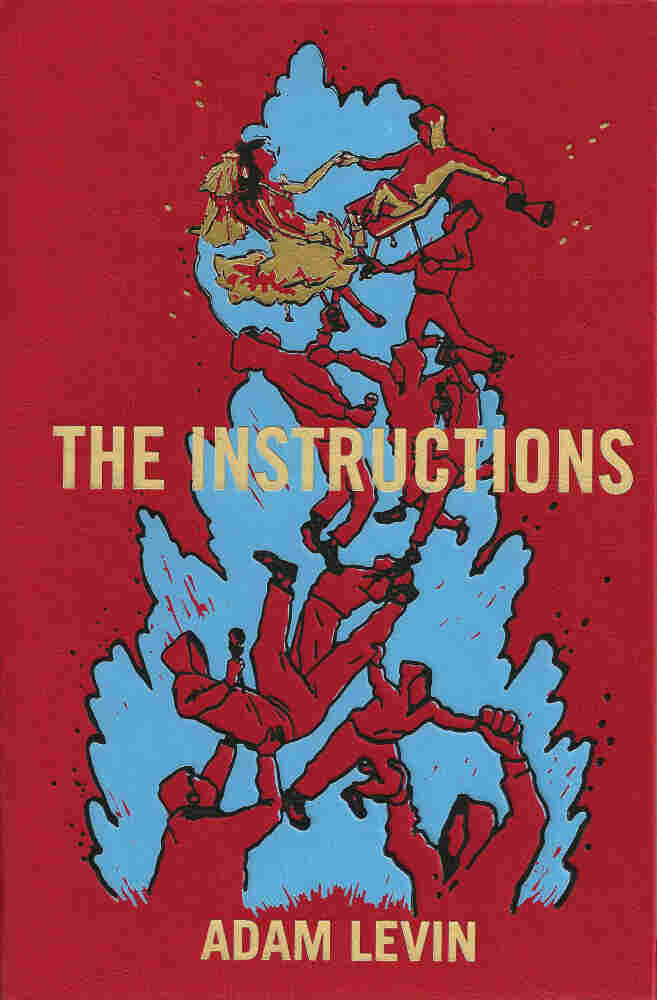 The spine of Adam Levin's gargantuan first novel is 3 inches thick, which means it will take up almost twice as much space on your bookshelf as Jonathan Franzen's Freedom. That makes the book daunting enough as a matter of real estate alone. Perhaps the more pressing literary question is whether Levin's apocalyptic fantasy of a four-day end-times battle at Illinois' Aptaksic Junior High, in November 2006, is enthralling enough to pass the Tolstoy Challenge. (Anytime a thousand-page book -- from Caro, Pynchon, David Foster Wallace, etc. -- makes a splash as noisy as this novel from McSweeney's has made, I can't help wondering if I would be better investing my long reading hours in War and Peace.)

In this case --  even having been dazzled by much of The Instructions -- I'm not sure I wouldn't have been better off on the battlefields of czarist Russia. The narrator of Levin's book is the preteen Gurion ben-Judah Maccabee, expelled from three Jewish schools and at the start of his insurrection a 10-year-old denizen of the Aptaksic "Cage," where the most troublesome and potentially violent students are in a kind of permanent detention. Gurion, the heir to the ancient Jewish warriors whose name he bears, may or may not be the Messiah.

The conceit of The Instructions is that it isn't a novel at all; it is Gurion's "new scripture," his account of the four-day battle, published in 2013 by followers who have preserved it as a definitive history of the early days of their movement toward a spiritual rebirth of the Israelites. But the enemies against whom he and his ragtag followers wage war in 21st century America -- a central-casting array of capricious school authorities -- are ultimately too minor to sustain full interest in this Armageddon in a teapot.

Whether the deity worshipped here is Adonai, the God of Israel, or Gurion's "favorite writer" Philip Roth remains an open question. Roth even makes a cameo appearance (by telephone) at the novel's climax, attempting to intercede in a hostage crisis. Perhaps it's inevitable that Roth disappoints Gurion's high expectations. Perhaps in a novel this ambitious, it's inevitable that the reader, too, will be disappointed. Gurion's repeated insistence on the differences between scripture and fiction -- "I write scripture," he tells Roth. "You have to read it different. It matters what I do" -- never coheres. 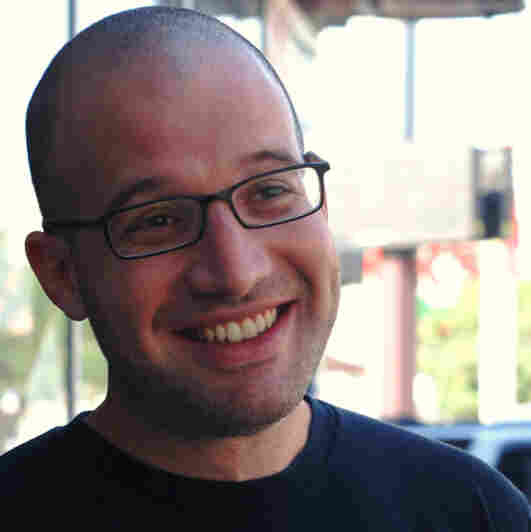 Adam Levin's short stories have been published in Tin House, McSweeney's and Esquire. He lives in Chicago, where he teaches writing at Columbia College and The School of the Art Institute. hide caption 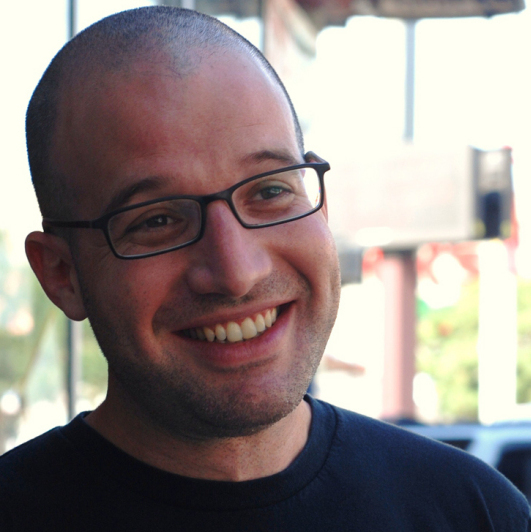 Adam Levin's short stories have been published in Tin House, McSweeney's and Esquire. He lives in Chicago, where he teaches writing at Columbia College and The School of the Art Institute.

This conceptual flaw leaves the length and didacticism of The Instructions at odds with the delicate observations that stand out as its momentous strengths. Gurion is attuned to the slightest tremors of feeling, and Levin renders these with entrancing simplicity. The reader swoons along with Gurion as he kisses his first love, Eliza June Watermark. "I can't tell my face from her face. ... It was like being in the first and third person at the same time."

At the heart of this Instructions is the tender story of a precocious and lonely 10-year-old boy who, bookish, brooding and pious, daydreams through the endless detentions and yearns to find peace as he is caught between attentive but warring parents. This Gurion, struggling to rewrite the secular suburban world in which he finds himself so unhappy and out of place, is vibrant and convincing, even as he nearly sinks beneath the weight of the heavy spiritual armor he is forced to wear.

Benji Nakamook thought we should waterboard each other, me and him and Vincie Portite. We wouldn't count the seconds to see who was bravest or whose lungs were deepest -- this wasn't for a contest. We'd each be held under til the moment the possibility of death became real to us, and in that moment, according to Benji, we'd have to draw one of the following conclusions: "My best friends are about to accidentally drown me!" or "My best friends are actually trying to drown me!" The point was to learn what it was we feared more: being misunderstood or being betrayed.

"That is so fucken stupid," Vincie Portite said. "No way I'd think you were trying to drown me."

"You don't know what you'll think," Nakamook told him. "Right now you're rational. Facing death, you won't be. That's how methods like waterboarding operate." Benji'd been reading a book about torture. "This one guy," he said, "Ali Al-Jahani, specifically stated that -- "

"Ali Al-Whatever whatever," said Vincie. "I'll do it if, one, you stop talking about that book -- it's getting fucken old -- and two, if Gurion's down. But it's stupid."

It did seem stupid, but Benji wasn't stupid, not even remotely, and I hated disappointing him. I said I was down.

Splashing on a kickfloat a couple feet away was Isadore Momo, a shy foreign chubnik who barely spoke English, but the rest of the class was over in the deep end. Benji reached out, tapped Momo on the ankle. "You're wanted over there," he said, pointing to the others.

"Sorry. I am sorry. Sorry," said Momo. He got off the kickfloat and fled.

Benji told us: "I'll thrash before my death seems real. You'll have to keep me under for a little while after that."

"How long's a little while?" Vincie Portite said.

I clutched one shoulder, palmed the crown of his skull. Vincie clutched the other shoulder and the back of his neck. Benji exhaled all the breath in his body. He let his legs buckle.

"How long then?" said Vincie.

"How about a twenty?"

A twenty then, I said.

I counted off twenty inside of my head, tried pulling him up, but he wasn't coming up. He just kept thrashing. He was tilted toward Vincie, who was staring at the water.

Vincie said, "You count fast. Did you do Mississippis? I was doing Mississippis -- I only got to twelve. Gurion. Gurion."

In the deep end, some kids had rhymed "Izzy" with "Jizzy." I'd revolved to see who: Ronrico and the Janitor. Momo told them, "Izzy. I am Izzy, for Isadore. Isadore

Momo. You may call me Izzy Momo." "Jizzy!" said Ronrico. "Jizzy Homo!" said the Janitor. Momo leaned hard on his kickfloat and took it.

Benji cough-hiccuped, hands on his waist.

So? I said to him. What was the conclusion?

That doesn't make sense, I said. Which one was first?

"You'll see for yourself in a second," he said.

We held Vincie under and he started to thrash. We counted fifteen and we pulled him back up.

"Neither," gasped Vincie. His pupils were pinned. His flushed face trembled.

"So what then?" said Benji.

"Who -- " Vincie said, but he choked on some air. He showed us his pointer, laid hands on my shoulders. "Who cares?" he said, catching up with his lungs. "I don't even know. I feel fucken stupid. Dying is fucked. I don't want to die."

Then it was my turn. I let all my breath out. My friends held me under. They had a firm hold that I couldn't have broken, and the water got colder, and my chest drew tighter, and I thought I might drink, take little sips, that a series of sips imbibed at steady intervals could gradually lessen the pressure of the strangle, but before I'd even tested this chomsky hypothesis, air stung my face and fattened my chest. They'd pulled me back up before death seemed real.

What happened? I said.

"We waited and waited. You wouldn't start thrashing."

"Vincie thought you passed out."

Nakamook asked me, "You want to go again?"

Not really, I said. If you think it's that important, though --

The whistle got blown. Free swim was over.

"What?" Vincie said. "Fine. Okay." He made his own fist and banged it on

I counted to three and we raced to the showers.

Were Isadore gay, I'd have probably hurt the Janitor for calling him a homo, and were he my friend, I'd have certainly avenged him -- even just for "Jizzy" – but Momo was neither gay nor my friend. I'd had plans to fight the Janitor since late the night before.

I had never fought anyone without good reason, and I needed to learn what doing so felt like. I needed to see if it felt any different. I'd been fighting a lot since I got to Aptakisic, and I enjoyed it so much -- maybe too much. Each fight was better, more fun than the last, and I worried I was thrilling on the damage alone, rather than the justice the damage was enacting. I worried that the people I'd been getting in fights with might as well have been anyone, as far as the fun I had pummeling them went. The only way to find out was to get in a fight without justification. If the thrill was absent, or in some way different, all would be well, I'd cease to worry. If the thrill was the same, though… I didn't know what, but I'd have to change something. So I'd picked a kid at random the night before -- at least somewhat at random; I disliked the Janitor, he disliked me, we had Gym the same period – and decided I'd fight him in the lockerroom.

Benji and Vincie were still in the showers -- I'd won the race -- and though I wasn't finished dressing, I saw it was time. If my friends got involved it could bance up the test, and I didn't need a shirt to get in a fight. I buckled my belt and ran up on the Janitor. A couple steps short of him, I towel-snapped his neck.

He whined and revolved. He said, "You're B.D. and you smell like cigarettes, it's nasty!"

No thrill yet, but we weren't really fighting.

I snorted up a goozy and twetched it on his toes.

"Towel!" he shouted. "Gimme a towel!" The Janitor dreaded all forms of dishygiene. He hopped on one leg. He threw wild punches. One caught my shoulder.

Now it was a fight. 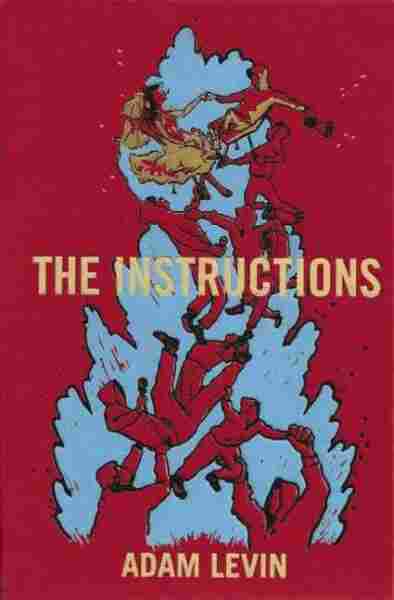