Accessibility links
Vt. Town's Food Focus Still A Growing Concept The book The Town That Food Saved put Hardwick and its local food community on the map. But small farms can translate to prices too high for many customers. So farmers are focusing on efficiency and new ways to broaden the appeal of local fare.

The town of Hardwick, Vt., has been celebrated as the scene of a local food revival. In recent years, lots of small farms have started up nearby.

Tom Stearns, president of a local organic seed company called High Mowing Seeds, says there are more organic farms per capita within 10 miles of Hardwick than anywhere else in the world. There's also a thriving local grocery co-op; a busy farmer's market; even a classy restaurant — Claire's — where almost anything you eat grew or grazed on land nearby. 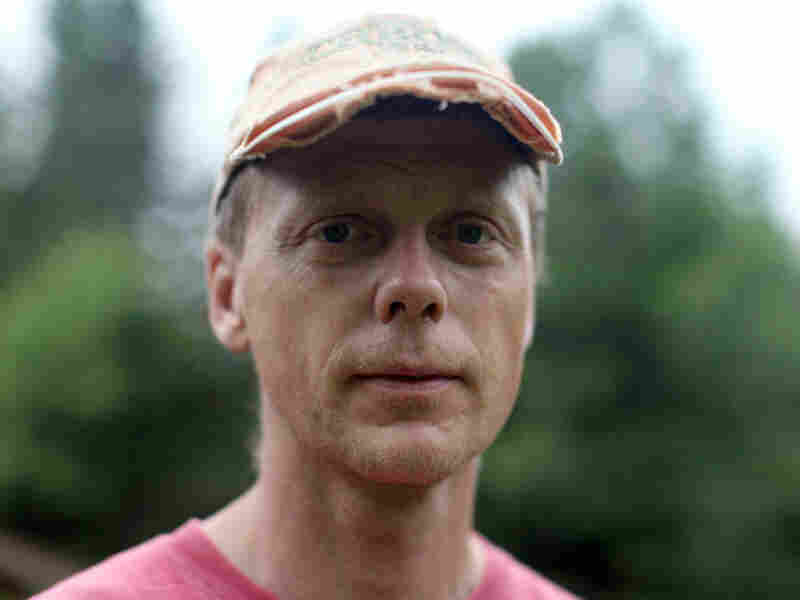 Ben Hewitt, the author of The Town That Food Saved: How One Community Found Vitality in Local Food, lives on a family farm in Cabot, Vt. Becky Lettenberger/NPR hide caption

But it was Ben Hewitt, as much as anyone, who really put Hardwick and its local food scene on the map. He's a writer and a back-to-the-land activist himself. He lives on 40 acres near Cabot, down the road from Hardwick, with his wife, their two home-schooled children, and an assortment of pigs, cows and a very friendly dog named Daisy.

Hewitt saw what was happening in Hardwick, and it struck him as unusual, even odd. "Here's this town: Unemployment rate 40 percent higher than the Vermont state average; median income 25 percent lower; and then there was this thing happening around so-called sustainable ag and local food!" Hewitt says. So Hewitt wrote a book about Hardwick: The Town That Food Saved.

But did food really save Hardwick? At the local high school, Hazen Union, some students in senior-level English classes have been reading and discussing Hewitt's book as a class assignment. They don't think it tells the whole story.

That supermarket food is shipped in from far away, but it's mostly cheaper than the local squash and greens and tomatoes on sale at the town co-op.

Another student, Ricky Wetherell, says that's why most people end up buying their food in big chain supermarkets, whether it's Hardwick or anywhere. "I feel like the whole world is sort of moving more in the direction of even more not local," he says.

Derek Demers jumps back in: "But at the same time, awareness is going up so much lately, especially around our area. It's like, there's two sides to this food thing, and both seem to be growing."

The students point out that some of their town's successful local farms are selling high-priced cheese and organic tofu in places like Boston and New York. It's not really for the locals.

"It's not that people don't want to eat healthfully, because we do see the benefits of eating locally and healthfully," says Morgan Worden, another senior. "But we simply don't have the money to do so. And that's the sad thing."

Yet this is not the end of the story. Because the situation in Hardwick is still evolving, and some people are working to make the town's local food everybody's food.

Take Pete Johnson. He owns one of the biggest organic farms in the area — Pete's Greens.

"You know, some of this food has been kind of fancy and on the fringes and perhaps a bit overpriced because the efficiencies of production are low," he says. "Our farm is small, and it's really diversified, which means we're not particularly efficient at raising anything."

So Johnson is trying to get a little bit bigger and more efficient. Essentially, he's moving a little bit in the "industrial" direction.

He rolls up a big door at one end of the greenhouse we're standing in, and a giant construction site comes into view.

"We had a barn fire here this winter," he says, without a hint in his voice of the drama of that night, when flames consumed most of the stored produce that he planned to sell through the winter.

"Now we're rebuilding our facility, and we're doing things like building a very large freezer." The freezer will store broccoli, berries and other produce to sell at markets across Vermont through the winter.

Johnson is also buying equipment that will cut and wash vegetables, puree squash — anything to make it more convenient for busy people to eat his food.

"That's really a key part of reaching a bigger group," he says. "What's the point of doing this if we're only reaching the 7 percent who are already converted?"

Johnson wants people to rely on local food and local farmers for all kinds of reasons. "For me, one of the biggest ones is the cultural aspect. These hills used to be populated by small farms," Johnson says. "Just cluttered with small farms everywhere! And now, even with this resurgence that we have going on, we don't have the culture that we used to have." 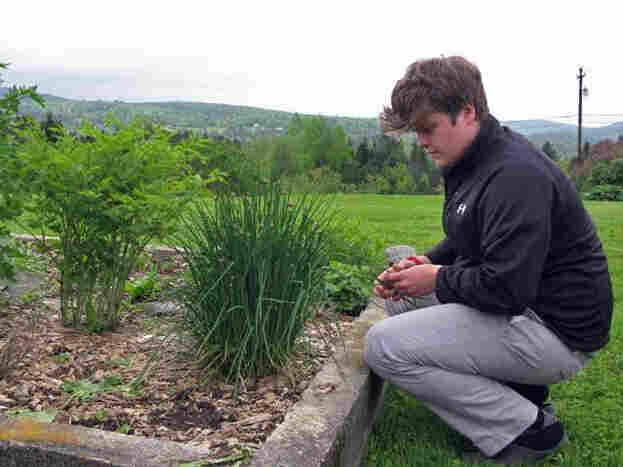 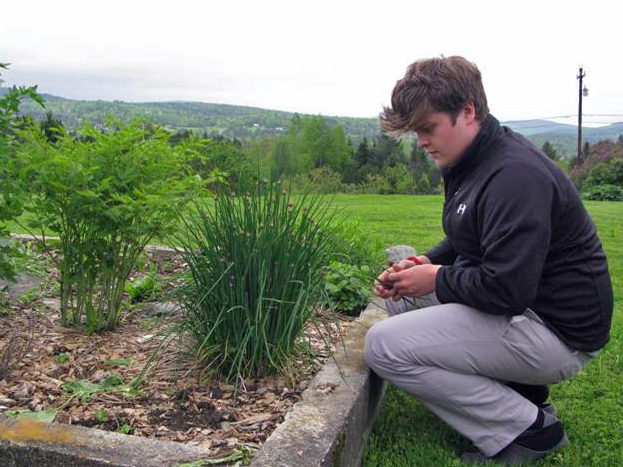 Finn Kane, a high school student, picks some things for dinner in his family garden outside East Hardwick.

It was a culture where everybody knew a farmer, and knew what it took to grow food. But Johnson says he's starting to see signs of it coming back. "When I graduated from college in 1997 and I told my friends I was going to be a vegetable farmer, there was no response," he says. "They didn't know where to go with that. And now, when I tell people what I do, everybody has some story to connect to it and is excited about it. And young folks, more and more of them want to stay here. They see being part of one of these businesses, or starting their own, as an exciting future."

Even managers at the two local supermarkets are now trying to put a few more local vegetables on their shelves. Lynn DeLaricheliere, at the Grand Union supermarket, says her corporate supervisors took some convincing, "but they're understanding now. Once they actually come to this town and realize how important it is — it's going to happen."

Food With A Sense Of Community

DeLaricheliere, who grew up in Hardwick, has no concerns about the ability of local farmers to deliver what the store needs, she says. "I want local; the more the better!"

And what got her interested in supporting local farmers? "The people!" she says. "It's the first question they ask: 'Where is the corn from? Where's the lettuce from? Where are the cucumbers from? Are they local?' This is a town — it's different! It's special!"

That's actually what you hear from a lot of people in Hardwick.

"The community here is so tight; like, everybody knows everybody!" says Zach Hartling, one of the students at Hazen Union High School. Hartling moved here from Connecticut and still has an outsider's perspective on the town. That sense of community, where the food's coming from, really knowing where it comes from, knowing the people who harvested it, "that just has a huge impact on the way things work," Hartling says.

The longer these high school students talked, the more they seemed to come around to the idea that for all their skepticism about food "saving" Hardwick, they and a lot of their fellow Hardwickians really do participate in local food, one way or another.

"The farmer's market moved this year to the Atkins Field, and it's getting bigger, it's expanding a lot," says Hartling.

A Tale Of Two Seed Farmers: Organic Vs. Engineered

Oh, The Things You Can Do With A Farm-Share Box June 8, 2011
USDA Encourages Schools To Partner With Local Farms April 27, 2011

"And Connie's Kitchen isn't organic, but it's local," says Finn Kane, a junior who likes to cook and dreams of opening his own restaurant in Hardwick. "It's local and it shows the growth of this town. I think the history of this town has always been hard times."

"And we persevere," interjects Meg Urie. She lives on a farm. Her mother is growing all the potatoes for meals at Lakewood Elementary School this year. "I feel like it's kind of just one of those places in the world where, you have hard times, you have a neighbor, and you help each other out. It's give and take."

"I don't think that food has saved Hardwick; I don't think Hardwick has found the answer. But I think that Hardwick is on the right path, more than most places," says Demers, the senior who works at the Grand Union supermarket. "I think we're headed in the right direction; we have a great start."

Maybe the same thing can't happen in bigger towns, or major cities. Maybe Hardwick is different. But in this small town, at least, food is moving from the fringes of local life back toward its heart.