Accessibility links
Eric Cantor: The 'Young Gun' In The Debt Standoff Democrats called him "childish." House Speaker John Boehner deemed him "helpful." A look at the ambitious, anti-tax advocate at the center of the debt-ceiling stalemate.

Eric Cantor: The 'Young Gun' In The Debt Standoff

Eric Cantor: The 'Young Gun' In The Debt Standoff

As the debt-ceiling talks descended into yet another day of deadlock, Democrats tried to pin blame on a new target: House Majority Leader Eric Cantor. 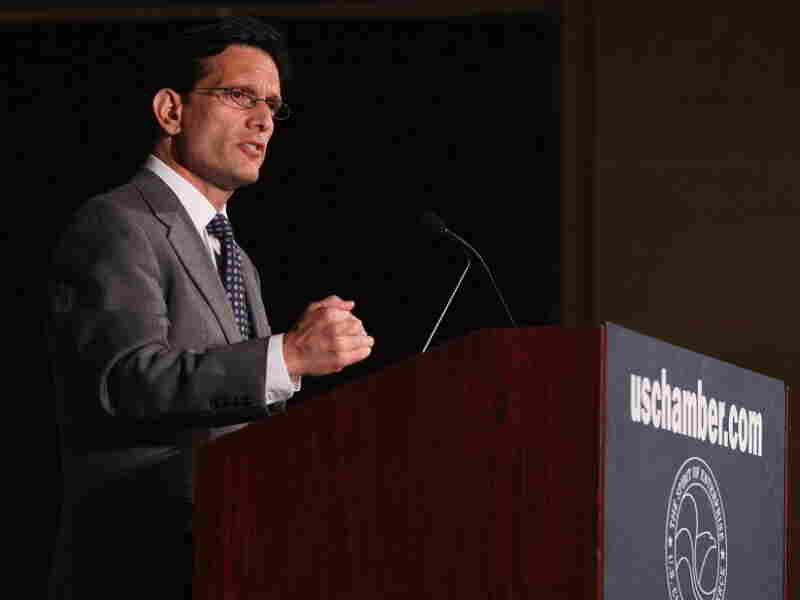 That Cantor is at the center of the acrimonious debt-ceiling discussions should surprise no one who has followed his efforts to mobilize small-government conservatives.

"Young Guns," the No. 2 Republican in the House calls them — and himself — in a book he co-wrote last year with two like-minded House colleagues.

Accounts of Cantor's rise from Richmond, Va., prep-schooler to Republican House leader are laced with tales of ambition, money-raising prowess and anti-tax fervor.

But with Wall Street and many on Capitol Hill increasingly alarmed at the political stalemate over upping the nation's borrowing ability, Cantor's no-compromise tactics have come under fire even within his own party.

He has walked out of bipartisan debt-ceiling meetings with Vice President Biden. Tangled with an increasingly aggravated President Obama. Treated sensitive closed-door negotiations as fodder for public statements.

And neutralized his on-paper party superior, House Speaker John Boehner, after the longtime Ohio Republican appeared ready to make a deal with the White House.

That deal, which reportedly included significant spending and entitlement cuts, appealed to many moderate Republicans. But for Cantor and his fiercely loyal Tea Party-fueled caucus members, whose votes are needed to pass any agreement, the proposal was DOA because it included a rollback of tax breaks for the wealthy.

Cantor, 48, born into a family steeped in Virginia Republican politics, now finds himself, and his political ambitions, at a precarious moment.

On Thursday morning, Senate Majority Leader Harry Reid (D-NV) called for Cantor to remove himself from negotiations, criticizing him as "childish" on the Senate floor.

And Democrats, in their efforts to make Cantor the debt-limit villain, have gleefully latched on to the six-term congressman's yearbook quote: "I want what I want when I want it."

But the married father of three has, so far, appeared unfazed.

Eric Cantor: In His Own Words

"I've been involved in grass-roots Republican politics since before I could even vote."

On his most important legislative priority:

"We need to make sure that we do all we can to grow this economy. President George W. Bush has been out in front leading on this issue. And it is all about trying to give back more of the taxpayer dollars to the people who earn them. And once we do that, whether it's business or a family, they can spend their money more effectively and better than can Washington. That's the way we grow this economy, and I think that's where we need to focus."

On Republicans and the Jewish community:

"We have moved away from sort of a generational attachment to the Democrat[ic] party. In the mainstream of the American Jewish community the issues of lower taxes and economic prosperity ... those issues of opportunity have really begun to take hold of the younger Jewish electorate."

"No, I think we are on the same page. I know you all love to write the soap opera here. And it is just that; it is something that I think belittles the real question here, and that is the difference between the sides and that is between the fact that Barack Obama wants to raise taxes and Republicans don't. Our conference is united and we have said as he set out the goal, that we would like to cut spending more than what we raise the debt limit without raising taxes. And that is the goal."

When asked earlier this week about whether he was willing to take "significant heat from your party" to get a deal done, Cantor replied: "I have said before, a vote to increase the debt limit in this country is an existential question for a fiscal conservative because what that does is facilitate more spending. And that has been my point all along in these discussions."

"Republicans, the speaker and I are united in saying we don't want to raise taxes on the American people," he said. "Our conference is united."

In a show of solidarity after Reid's Thursday morning comments, Boehner and Cantor appeared together at a news conference Thursday on Capitol Hill.

Boehner defended his colleague, saying that "any suggestion that the role that Eric has played in this meeting has been anything less than helpful is just wrong. I'm glad that Eric's there, and those that have other opinions should keep them to themselves."

Cantor said that Reid "is frustrated, as we all are."

"The speaker and I have consistently been on the same page," Cantor said. "We are not going to raise the debt ceiling unless we have cuts in excess of that amount; that we don't want to raise taxes; and that we want to structurally change the system."

Cantor is not a new face to the fervently anti-tax wing of the party, now embodied by the Tea Party movement.

In a 2007 column in the conservative Weekly Standard magazine, Fred Barnes referred to Cantor as a "small government conservative" and a "ferocious foe of tax hikes."

Barnes predicted a "bright future" for Cantor and called him the "most valuable player" among the party's so-called young guns.

His father was treasurer of Ronald Reagan's presidential campaign in Virginia in 1980 and was close to state GOP leaders.

After graduating from the elite Collegiate School, where he was one of only a few Jewish students, Cantor went on to study political science at George Washington University. While there, he worked as an intern for Republican Rep. Tom Bliley of Virginia.

Any suggestion that the role that Eric has played in this meeting has been anything less than helpful is just wrong. I'm glad that Eric's there, and those that have other opinions should keep them to themselves.

Cantor received a law degree from the College of William and Mary, and a master's degree in real estate finance from Columbia University.

By 1991, Cantor, who worked in the family real estate business, had won his first term in the Virginia House of Delegates at age 28. A decade later, he was serving in the U.S. House, already tapped to be chief deputy whip, a critical vote-counting position in party leadership.

An article in his hometown newspaper, The Richmond Times-Dispatch, a few years later detailed his fundraising prowess, including events in Beverly Hills, West Hollywood and Aspen.

It is that fundraising finesse, and his ability as the lone Jewish Republican in the House to appeal to traditionally Democratic Jewish donors, that has helped to cement his influence within his caucus.

The hometown paper also reported Cantor's role in securing a $10.1 billion federal buyout of the nation's tobacco farmers — a deal attached, the Times-Dispatch reported, to a corporate tax overhaul bill.

In 2004, the political publication Roll Call provided details of a Cantor fundraiser at the Plaza Hotel in New York City during which mostly Jewish donors contributed about $500,000 to the congressman's leadership committee, ERICPAC.

Committee funds can be used to help other candidates, and to promote Cantor's agenda.

He has been generous with both his PAC money and his time, to, as he has said, lead his party out of the political "wilderness." 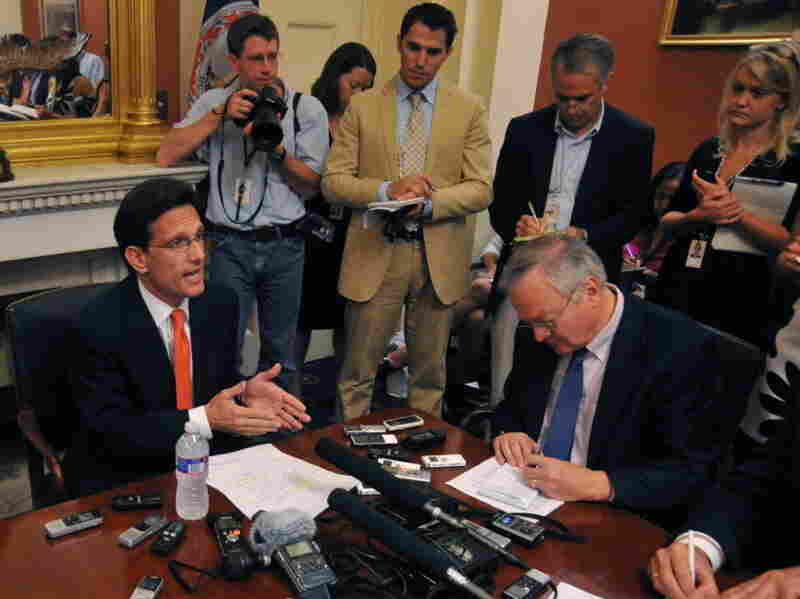 Since then, his staff has said, he has made hundreds of trips campaigning for like-minded candidates, earning a reputation as one of Capitol Hill's premier rainmakers.

According to The Washington Post, Cantor's staff said that he helped raise about $10 million for presidential candidate John McCain in 2008. Last year, the Center for Responsive Politics says, Cantor's PAC took in $4.4 million and contributed more than $1.6 million to Republican candidates running in the midterm elections.

Cantor's self-written narrative has been about righting the Republican Party after its scandals of the past decade, and creating a "party of ideas" again.

But he had a brush with the Jack Abramoff scandal that sent the lobbyist to jail and led to the downfall of House Majority Leader Tom DeLay, a Texas Republican.

After the Jewish newspaper The Forward reported that Cantor had failed to pay for or list as a debt a $500-a-plate "sandwich-naming" fundraising event held for him at Abramoff's Washington restaurant, he "obtained an invoice and quickly paid $1,732 for the event."

Cantor also signed a letter that urged the Interior Department to rule on an Indian casino issue in a way that would have benefited Abramoff's lobbying clients.

Cantor told the Times-Dispatch: "I never even knew he was in any way involved with that letter, whatsoever."

Abramoff hadn't always been a friend: During Cantor's first run for Congress, he was challenged in a GOP primary in his solidly Republican district. He was expected to win easily, but he ended up eking out a bare victory after a last-minute anti-Semitic phone and mail campaign against him narrowed the race.

Behind the calls? The Abramoff-backed Faith and Family Alliance.

After Cantor's win, Abramoff became a supporter, and he told the Forward that the Virginia congressman would become "the party's most visible liaison to Jewish groups and in my view will be an important liaison to conservatives and religious Christians."

In a 2003 interview with the conservative Insight on the News online magazine, Cantor, who has a perfect rating from the American Conservative Union, described himself like this: "Someone who likes to work toward consensus, somebody who desires to work with all different types of people."

Times have changed, and, Democrats may argue, so has Eric Cantor.