Accessibility links
SIDS: Many Deaths No Longer A Mystery For years, little was known about why babies died suddenly and unexpectedly in their sleep. But now, many of these deaths are believed to be preventable accidents caused by unsafe sleep practices. That's led some to question whether the term sudden infant death syndrome is still relevant. 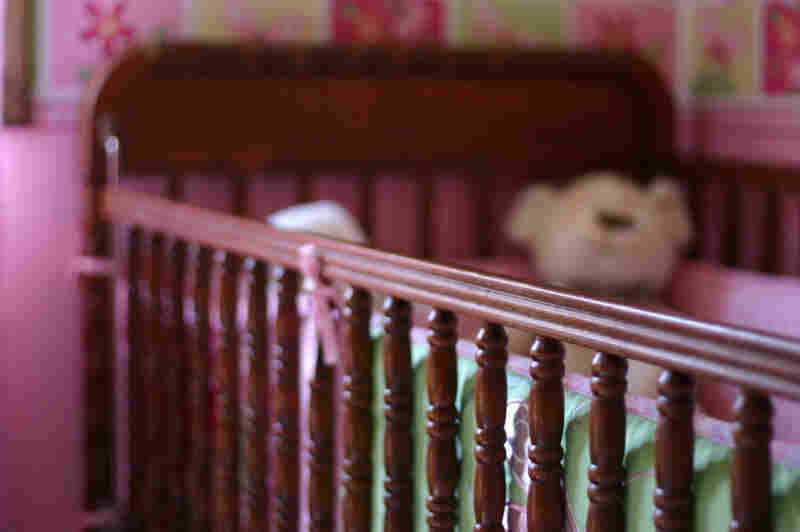 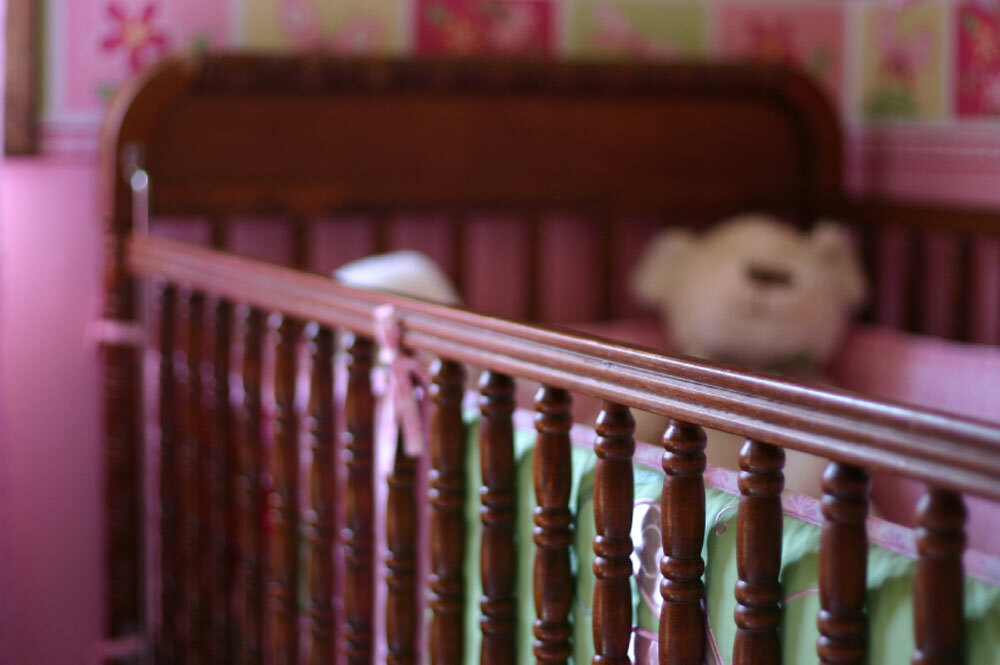 Many cases once thought to be sudden infant death syndrome are now believed to be accidents caused by unsafe sleep practices. The image above shows a crib with a teddy bear and bumper — items the American Academy of Pediatrics warns against putting in your baby's crib.

The thought of a baby dying suddenly and unexpectedly is one that keeps parents awake at night, fearing the worst. For years, little was known about sudden infant death syndrome, or SIDS. Babies would die in their sleep, and it was presumed that little could be done to prevent those deaths.

Today in the U.S., more than 2,000 babies die of SIDS every year, according to government figures.

But the mystery surrounding SIDS is not what it once was. Many SIDS deaths are now believed to be accidents caused by unsafe sleep practices. And some are questioning whether the term SIDS remains relevant at all.

SIDS: A 'Diagnosis Of Exclusion'

In Wayne County, Mich., 50 to 60 infants die suddenly and unexpectedly each year, most of them in Detroit.

For the past 11 years, the task of investigating those cases has fallen to Pat Tackitt, a pediatric mortality investigator for the Wayne County Medical Examiner's Office.

When an infant dies, law enforcement will contact her. She'll head out immediately to the family's home, spending anywhere from one to five hours talking with the family, using a doll to help parents re-enact what happened.

She'll hand the doll to the parents and ask them to show her where they placed the baby down, when they last saw the baby alive, and how they found him or her. She'll also find out who and what was around.

In all, Tackitt has gone to the scene of more than 500 infant deaths — so many, she stopped counting.

In almost all of the cases, Tackitt says, she found that the baby was in an unsafe sleep environment. The baby may have been sleeping face down, may have been covered by a blanket or pillow, or may have gotten lodged between sofa cushions. In some cases, the baby was sleeping with a parent who rolled on top of the infant in the night.

Tackitt says these are all signs of accidental suffocation, not SIDS.

"There are some deaths that we cannot prevent. These are not those deaths," she says. "The vast majority of these are preventable deaths. There's been very, very few that we've seen that could not be prevented."

SIDS is defined as the sudden death of an infant under 1 year of age, which remains unexplained after a thorough case investigation, including performance of a complete autopsy, examination of the death scene, and review of the clinical history.

It's often called a "diagnosis of exclusion," meaning it's the diagnosis that's given when everything else has been ruled out. But, Tackitt says, often the term SIDS comes up prematurely.

"We find that in many cases, families have been told from the time the ambulance drove up to the time that the clergy saw them in the emergency room ... that this is going to be a SIDS death," Tackitt says. "All that means is, 'We don't know.' Why would we start out saying 'we don't know,' when we haven't even looked yet?"

Some would argue that a SIDS diagnosis offers compassion in a moment of distress, and a way to avoid blaming parents amid the tragedy.

"I think that's cruel," Schmidt says. "I think actually sitting down with a parent and telling them what happened is much more humane than trying to obscure the reasons why that infant actually died. Most people really want to know what happened, so they won't do it again."

In Wayne County, it's been four years since they last signed out a death as SIDS. And that's true elsewhere, too.

The 'Back To Sleep' Campaign

At Children's National Medical Center in Washington, D.C., pediatrician Rachel Moon says it's been several years since they've seen what she calls a "true SIDS case" in the District.

"All the babies who died suddenly and unexpectedly have all died in unsafe sleep environments," Moon says. "These are all cases that could have been prevented."

Moon chairs the American Academy of Pediatrics Task Force on SIDS. In 1992, it was the academy that came out with the recommendation that babies be placed on their backs to sleep, not on their stomachs.

The "Back to Sleep" public health campaign that followed proved hugely successful. As back-sleeping rates soared, the SIDS rate dropped. By 2000, it had fallen 50 percent. But since then, progress has stalled.

About a quarter of parents in the U.S. say they don't put their babies on their backs to sleep, and among African-Americans, it's about half. According to statistics, African-American babies die of SIDS at a rate twice that of whites.

Moon has been researching why so many people disregard the recommendations. She's found everything from misconceptions about the risks of choking to distrust of doctors to confusion and skepticism.

Asked if she can imagine dropping the term "SIDS" at some point, she says, "Oh yeah, I can imagine a time when we just talk about safe sleep. And I think we're starting to get there. I think if people know something's preventable, and they can visualize it happening, then they're more likely to take steps to try to prevent it."

For now, though, Moon says, SIDS is a term people are familiar with. So she'll continue to talk about "SIDS prevention."

She does also believe that there are some true SIDS cases out there — cases in which babies were on their backs, alone in their cribs with nothing else in the crib. But, she says, those cases are very rare.

Can A Simpler Message Save Lives?

In Baltimore, public health officials have replaced the term "SIDS" with these ABCs: Alone. Back. Crib.

In literature distributed in hospitals and in public service announcements, there is almost no mention of SIDS, but rather the message "Sleep Safe." They urge parents to share a room with their baby, but not a bed. They tell parents that the safest sleeping position for a baby is on his or her back, and that a baby is not more likely to choke while on the back. And they emphasize the importance of a clean and clear crib, free of blankets, pillows and toys.

From 2002 to 2010, unsafe sleep environments were identified in more than 90 percent of sleep-related infant deaths in Baltimore. The hope is that a simpler message will help save lives.

On a national level, the Centers for Disease Control and Prevention is piloting a Sudden Unexpected Infant Death case registry in several states. The goal is to create systems that allow people to more comprehensively describe the circumstances and events surrounding sudden infant deaths.

The pilot project followed a study that found great inconsistency in how SIDS deaths are reported.

CDC senior scientist Carrie Shapiro-Mendoza led that study, which looked at two years of SIDS-coded death certificates. She found that in a third of the deaths, SIDS was not explicitly reported by the certifier, raising questions about whether the certifier meant for the deaths to be counted as SIDS.

Instead of the term SIDS, the certifiers used other terms, including "sudden infant death" and "sudden unexpected death in infancy." Some had accompanying notes pointing to unsafe sleep environments. Still, because of the way death certificates are coded, they became part of the national SIDS statistic.

Shapiro-Mendoza also found that SIDS can mean different things to different people. She points out that certifiers have varying levels of education.

"In some large metropolitan areas, for instance, you may have a medical examiner who is a board-certified pediatric pathologist," she says. "In other smaller counties or jurisdictions, you may have an elected official, coroner, and he may have no medical background."

The report concludes that nationally established guidelines for infant death scene investigations would help in the reporting and classification of infant deaths, and that in turn could help with identifying trends.

"If we understand the mechanisms that caused these deaths, if we can actually explain why they occurred, we can hopefully prevent these deaths," Shapiro-Mendoza says.