Accessibility links
The New Republic: Enough! Negotiate Or Bust As default looms on the horizon, President Barack Obama is beginning to reach his limit with Republicans. Jonathan Cohn of The New Republic hopes the president's unyielding stance on tax cuts and debt negotiations will represent a new trend when it comes to budget debates. 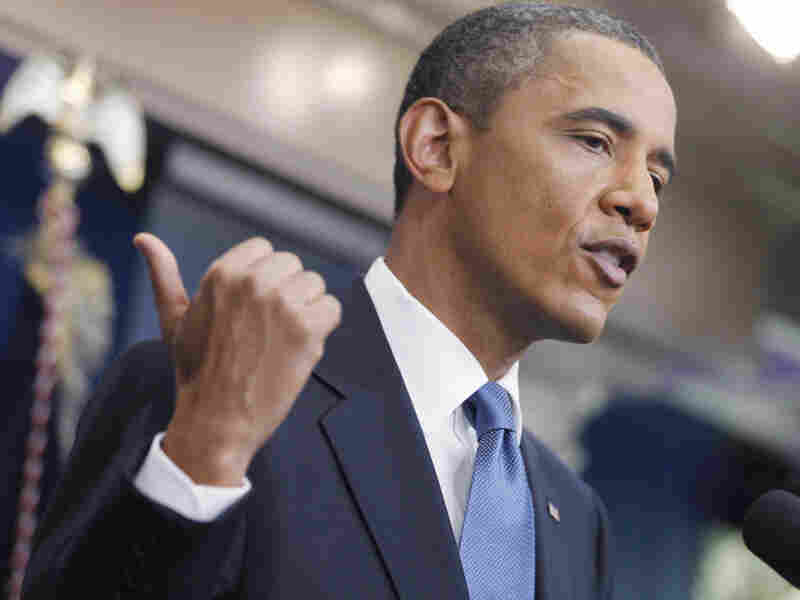 President Barack Obama talks about the ongoing budget negotiations on Monday in the briefing room of the White House in Washington. Charles Dharapak/AP hide caption 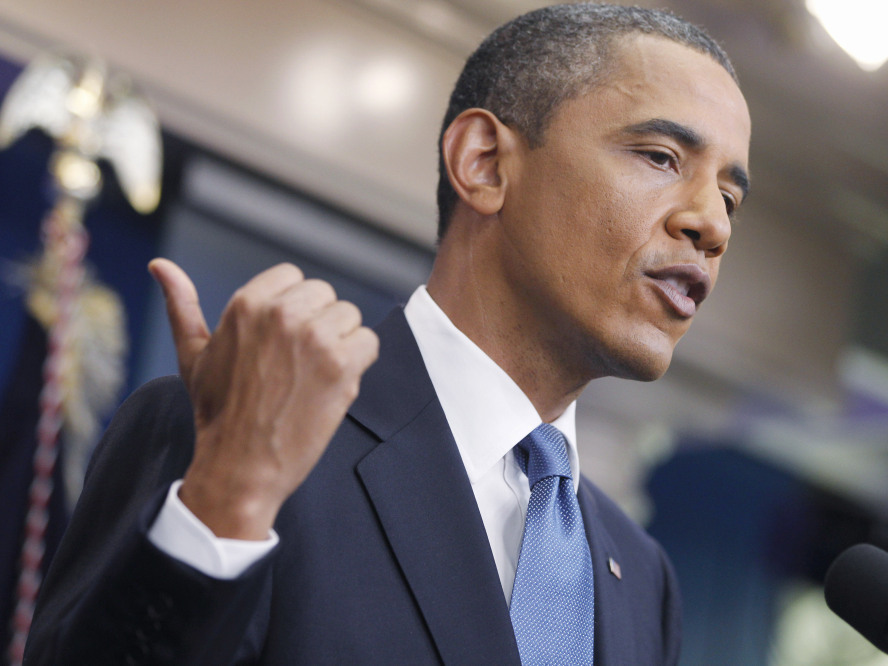 President Barack Obama talks about the ongoing budget negotiations on Monday in the briefing room of the White House in Washington.

Read Another Opinion On The Debt Debate From The Weekly Stanard.

Last night President Obama finally said to the Republicans what many of his supporters have been thinking for many weeks now: "Enough."

With Republicans refusing once again to accept any new revenue as part of a deficit reduction deal and House Majority Leader Eric Cantor (according to some sources) interrupting the president to propose, for the third time, passing only a stopgap increase in the debt ceiling, Obama reportedly told Cantor that he'd veto such a bill – and that he was prepared to "take it to the American people."

Via multiple media accounts, Obama went on to lecture Cantor about Republican intransigence, suggesting that a president like Ronald Reagan would never have put up with such treatment. "I've reached my limit," Obama reportedly said. "This may bring my presidency down, but I will not yield on this." At that point Obama pushed back from the table, angrily in some accounts, saying "I'll see you tomorrow."

Obama's frustration isn't surprising. By any reasonable standard, Obama and the Democrats have offered to meet the Republicans more than halfway. A lot more than halfway. The most ambitious proposal Obama has put forth is a "grand bargain" that would reduce net deficits by more than $4 trillion over the next ten years, primarily through spending cuts that would affect virtually every aspect of federal operations. As part of the deal, Obama has apparently offered to cut Medicaid and Social Security, while raising the eligibility age for Medicare, in exchange for what would have been relatively modest increases in revenue on the wealthy.

Such a deal would be more lopsided towards Republican priorities than the spending bills Reagan, George H.W. Bush, and Bill Clinton signed when they were in office. But while House Speaker John Boehner worked closely with Obama to craft the plan, and moderate conservative pundits like David Brooks have called it the "deal of the century," the House Republican caucus has ruled it out for the same reason Cantor did on Wednesday: Any new revenue, they say, is unacceptable. Obama shouldn't agree to such terms.

But what would Obama find acceptable? And would it live up to his increasingly tough rhetoric? On Wednesday, Obama effectively outlined three possibilities, according to reports (like this one from the Huffington Post's Sam Stein) and sources that have spoken to TNR. Apart from the $4 trillion plan that Republicans have indicated they won't accept, Obama said, he could agree to either a proposal that cut deficits by $1.5 to $1.7 trillion through spending cuts alone or a proposal that cut deficits by as much as $2.5 trillion through cuts and just a little new revenue.

The negotiation is very fluid, and the reports from inside very piecemeal, making it impossible to say what, exactly, any of these plans would look like if they became law. But the $2.5 trillion plan would likely include at least some of the entitlement cuts from the $4 trillion plan, including a reduction in federal contributions to Medicaid that would make it harder for people on the program to see physicians, particularly specialists. (See this Center on Budget and Policy Priorities report for more on that.)

The $1.5 to $1.7 trillion plan would have fewer major entitlement cuts, if reports are to be believed; the money would come largely from discretionary spending. But discretionary cuts matter, too. A new paper from Ethan Pollack of the Economic Policy Institute notes that similar proposals made earlier this year would have reduced discretionary spending (not including defense spending) to levels not seen since 1962:

Keep in mind that 1962 was before the entire Great Society and before modern environmental regulation; back then the federal government's role in funding education, law enforcement, and keeping families off the street was minimal. In short, a [non-defense discretionary] budget level that falls short of its 1962 level would cripple basic government functions and fail the needs of a growing population

Of course, the details matter a lot here. Exactly how much of the discretionary cuts would come from defense and how much would come from the rest of the budget? Could negotiators construct a budgetary "firewall" to make sure the distinction between defense and non-defense spending held up over the next two years? And what about the timing of the cuts? The economy is very weak right now, making this an awful time to cut spending that both provides some critical human services and helps put extra spending money into circulation. Postponing discretionary cuts for a year or two, until after the economy is stronger, would help. (Sources familiar with the discussions tell TNR that both the firewall and the timing are key components of the negotiations right now.)

Still, the most important question is what concessions Republicans are willing to make in return for these spending reductions. If revenue is off the table altogether, should Democrats agree to any cuts at all? Remember, Mitch McConnell's plan would allow Obama to raise the debt ceiling with no cuts whatsoever, although it might impose a political cost for doing so.

And what if the agreement includes an extension of unemployment insurance or the payroll tax holiday, as the administration is apparently pushing? What if the agreement also included a version of Obama's infrastructure bank or some other type of public works spending? Politically and substantively, efforts that boost the economy in the short term could be worth a lot, if they are large enough to create substantial numbers of new jobs.

At this point, none of us can answer these questions. (Not even the people in the room know how the negotiations will turn out.) All we can do is hope that Obama's rhetoric on Wednesday signals a tough negotiating position going forward — and that, somehow, we come out of this mess with U.S. creditworthiness intact, the welfare state relatively unscathed, and some sort of economic stimulus about to take effect.