Accessibility links
On Location: 50 Years Of Movie Magic In Marfa, Texas The tiny West Texas town has been the backdrop for movies like No Country For Old Men, There Will Be Blood and Giant. Hollywood — and plenty of other people — can't seem to get enough of Marfa's wide-open spaces. 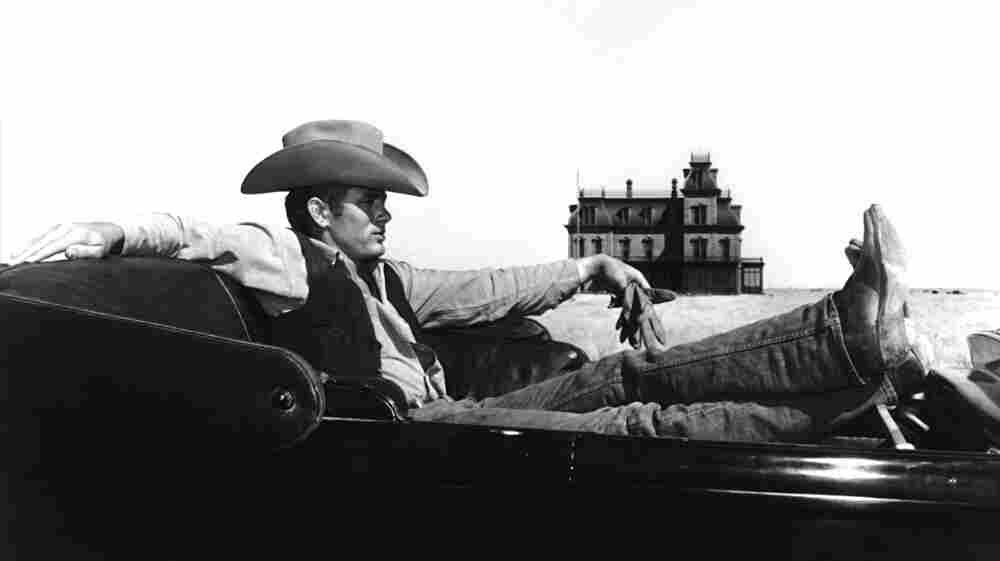 James Dean on the set of the 1956 film Giant, which was filmed on the Ryan Ranch, west of the town of Marfa. The skeleton of the mansion in the background still stands on the ranch today. Warner Bros. Pictures/Photofest hide caption 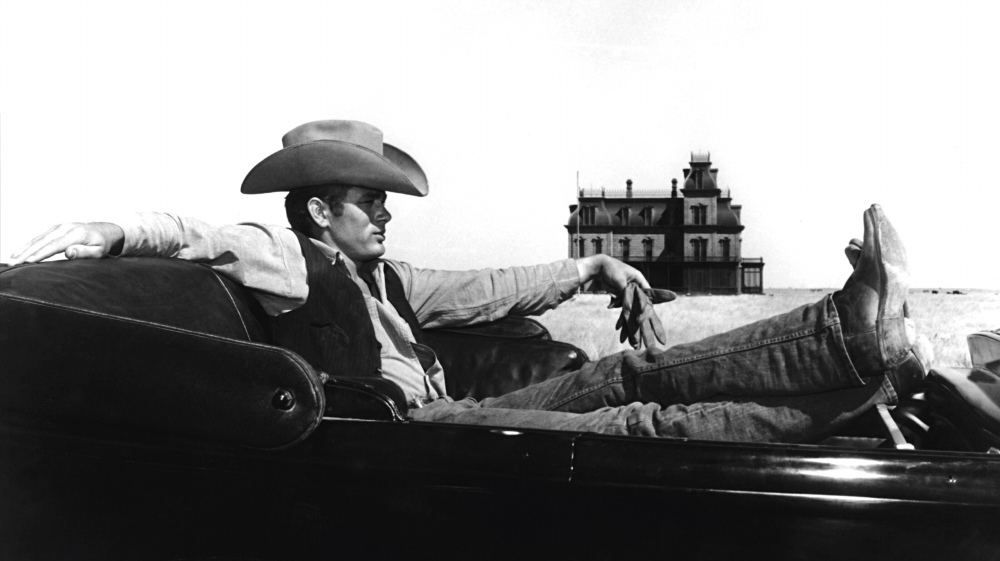 James Dean on the set of the 1956 film Giant, which was filmed on the Ryan Ranch, west of the town of Marfa. The skeleton of the mansion in the background still stands on the ranch today.

Marfa is a tiny town in West Texas with just 2,000 residents, about 60 miles from the Mexican border and nearly three hours by car from El Paso. But it's been the backdrop for some of Hollywood's most notable movies. It was the site of the 1956 epic Giant, which starred James Dean as a rancher turned oil tycoon, and recently, two Oscar winners, No Country For Old Men and There Will Be Blood.

Why is Hollywood so attracted to Texas? The drive-in movie critic, Joe Bob Briggs, says it's "because evil thrives in Texas." People seem especially drawn to West Texas, a land of limitless desolation — and possibilities — onto which they can project greed, lust and violence. Which makes it perfect to visit as part of our series On Location, which looks at the places where great American movies were filmed. 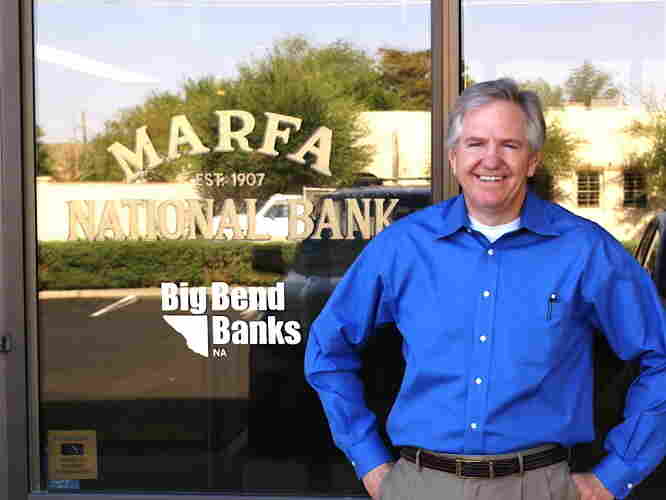 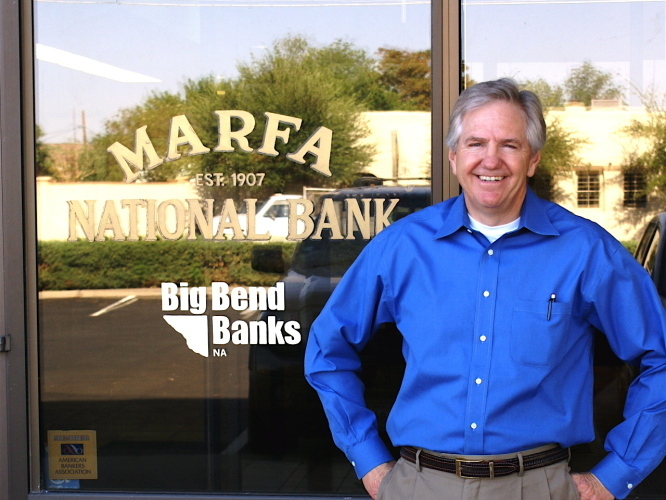 Chip Love, president of the Marfa National Bank, played a victim of Javier Bardem's psychopathic hitman in No Country For Old Men.

Chip Love sits in a conference room of the Marfa National Bank, where he's president. Love is affable, direct and self-deprecating, just like a West Texan. Love had a small role in No Country For Old Men as a salesman driving along a lonesome highway who gets pulled over by a police car driven by a psychopathic hitman played by Javier Bardem.

Bardem smiles, and puts a cattle bolt gun to the banker's forehead. Definitely evil. But why Marfa?

"Yeah, it's a good question," Love says. "The artists will tell you that Marfa has great light. I don't know how to quantify the light other than I know we have some beautiful sunsets. There are still plenty of places you can get and not see anything man-made. Maybe the camera likes that."

The tiny town is a pinprick on the great Trans-Pecos region. Its odd name was bestowed by a railroad man's wife, after a character from a Dostoevsky novel. On all sides, it's surrounded by immense cattle ranches, the edge of vision bounded by blue mountains.

There Will Be Blood

"We still are some of the wide-open, just pretty country that you don't really get to see anywhere else," says David Williams, manager of MacGuire Ranch, where There Will Be Blood was shot in 2006. "You can see for — those mountains we're looking at over there are 20 miles away."

Williams, a fourth-generation cattleman, had spent the morning separating yearlings from mama cows. He has come to like movie people — he says they're fun and they help the declining ranch economy. Williams even earned an executive producer credit on There Will Be Blood. In the movie, Daniel Day-Lewis plays a ruthless California oilman who hits a gusher. Williams' duties on the film included helping to erect a replica of a turn-of-the-century drilling derrick.

"It was a great big ole huge thing and they ended up burning it down in the movie," Williams says. "I was kind of sad seein' 'em burn it down after they spent several months buildin' it." 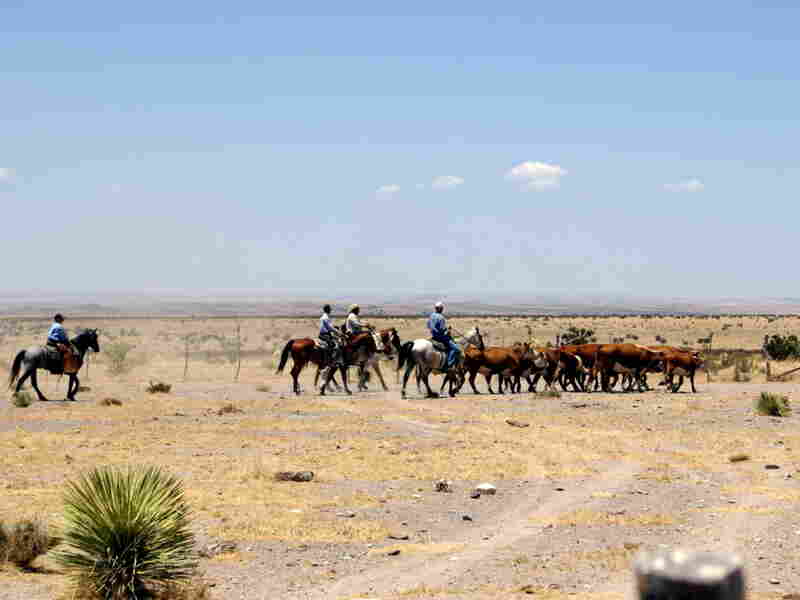 Cowboys on the MacGuire Ranch, where There Will Be Blood was filmed, drive Hereford cattle to the shipping pens. Helen Burnett hide caption 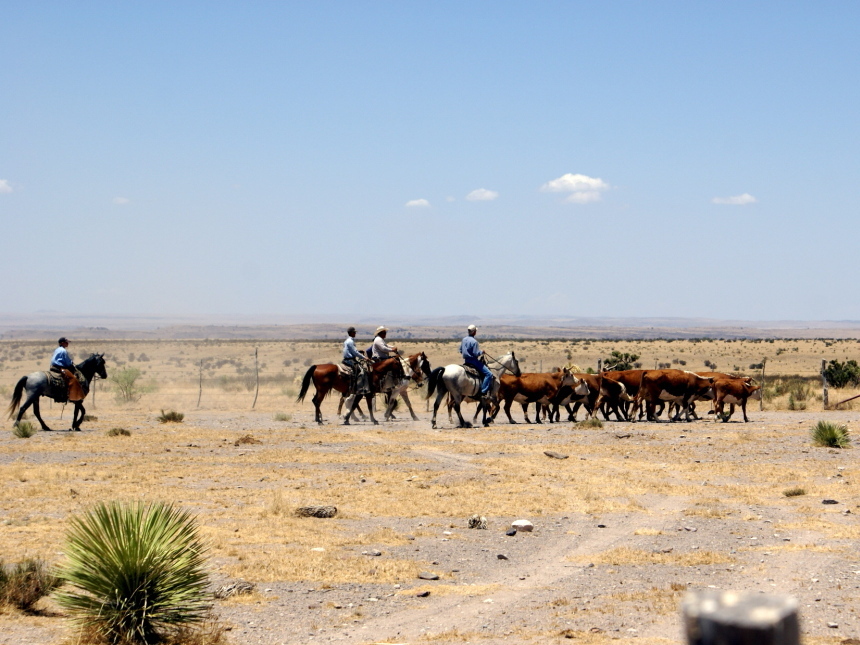 Cowboys on the MacGuire Ranch, where There Will Be Blood was filmed, drive Hereford cattle to the shipping pens.

With Hollywood types, it doesn't hurt that Marfa is, well, a different sort of Texas town, with just one blinking traffic light but 14 art galleries, an independent bookstore and an organic grocery. In red, red West Texas, Barack Obama carried the county.

Are you getting the picture?

In the land that created the Highland Hereford cattle breed, it is now possible to get a specialty coffee served by a young man with a verse from the French poet Rimbaud tattooed on his forearm. On the edge of town, there's a new hotel called El Cosmico where you can stay in a vintage trailer, a yurt or a tipi.

Though ranching is still the region's mainstay, Marfa's artistic side has been growing ever since the artist Donald Judd came here in the 1980s. He too was attracted by the primordial emptiness of the country, where he installed large-scale steel and concrete sculptures.

Liz Lambert, who owns the El Cosmico hotel, comes from a ranching family that has been in far West Texas for decades. Although she is a successful hotelier living in Austin, she says her heart is in the Trans-Pecos.

"My grandfather would always say you can see clear into next week," Lambert says. "And I think that probably translates magically onto film."

There have been other movies shot out here over the years: Andromeda Strain, Fandango and The Good Old Boys, but Marfa's place in movie history begins in 1955 with Giant. The 3 1/2-hour epic about a clash between a rancher and an oilman starred Elizabeth Taylor, Rock Hudson and James Dean.

Giant junkies have been visiting Marfa for decades. But the current newcomers to the town seem puzzled by the film's cult following.

"I saw the movie when we came to town," says Allyson Feeney, a 26-year-old Californian teaching art classes in town. "It was hard to watch. It was just, it was long, y'know? It's not the same pace as contemporary movies and that's the problem." 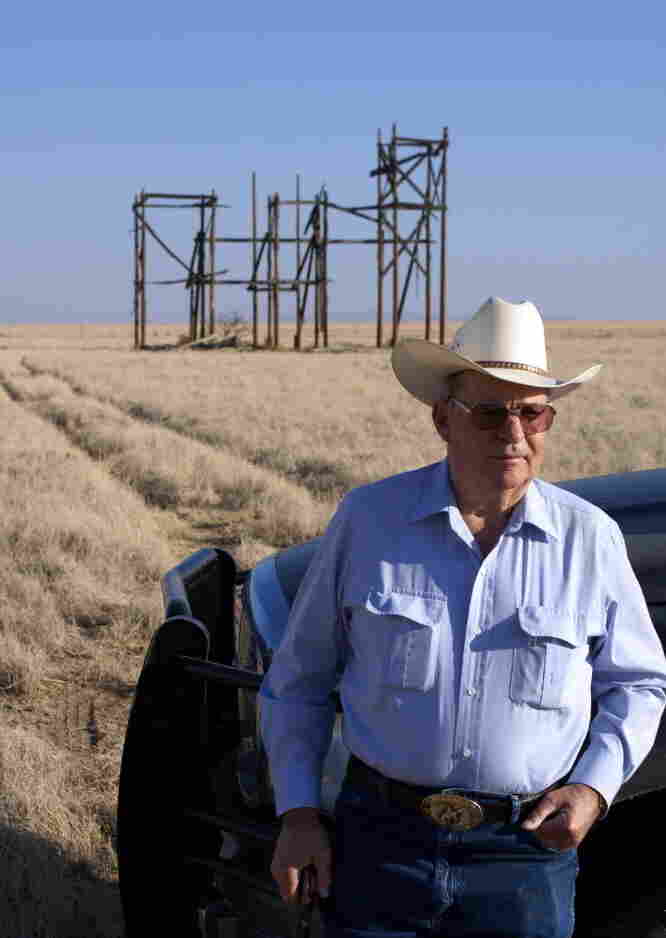 Clay Evans stands before the ruins of the mansion built for the 1956 film Giant. Evans, whose family has owned the ranch since back before the movie was filmed, recently put it up for sale. Helen Burnett hide caption 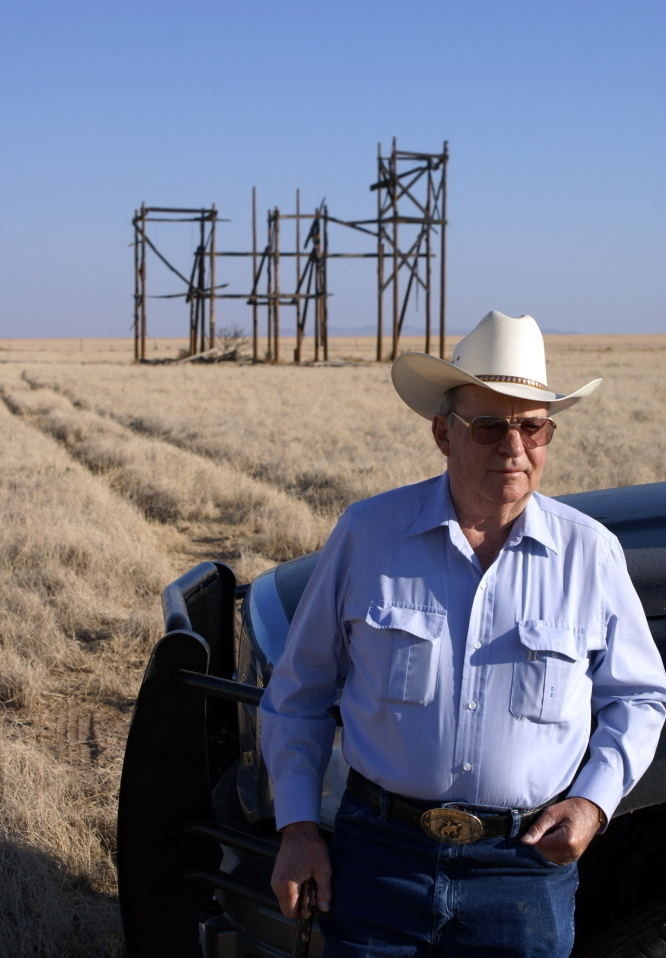 Clay Evans stands before the ruins of the mansion built for the 1956 film Giant. Evans, whose family has owned the ranch since back before the movie was filmed, recently put it up for sale.

Despite being a period piece, Giant — more than any other movie made around Marfa — features the sprawling, windblown landscape as a character. It was shot on the Ryan Ranch, west of town, a sea of rippling wheat-colored grass more than 1 1/2 times the size of Manhattan.

Ranch owner Clay Evans, now 75 years old, was 19 when the crew and cast arrived on his family's ranch. All the cowboys gawked at 23-year-old Elizabeth Taylor.

"Aw, I remember Elizabeth Taylor," Evans says. "She cussed a lot and we thought she was good lookin' but we didn't pay much attention to her."

George Stevens, who would go on to win the Oscar for Best Director for the film, paid $20,000 to use the Ryan Ranch, cattle and horses included. Today, the skeleton of the towering mansion built for the film still stands. But last month, Evans put his ranch up for sale.

Asking price: just under $29 million. At that price, no one expects the new owners to buy the ranch purely for cattle. Increasingly, the worth of this desert grassland around Marfa is measured in its austere beauty.

The late-breaking gossip is that movie scouts were recently in town looking for a location to shoot a remake of The Lone Ranger.