Accessibility links
Post-Shuttle, NASA To Keep Students Looking Up A child born today will never see an American space shuttle blast off from the Kennedy Space Center. That worries some educators, who see human space flight as a great recruiter for future scientists and engineers. Don't worry, NASA says, its education mission is far from over. 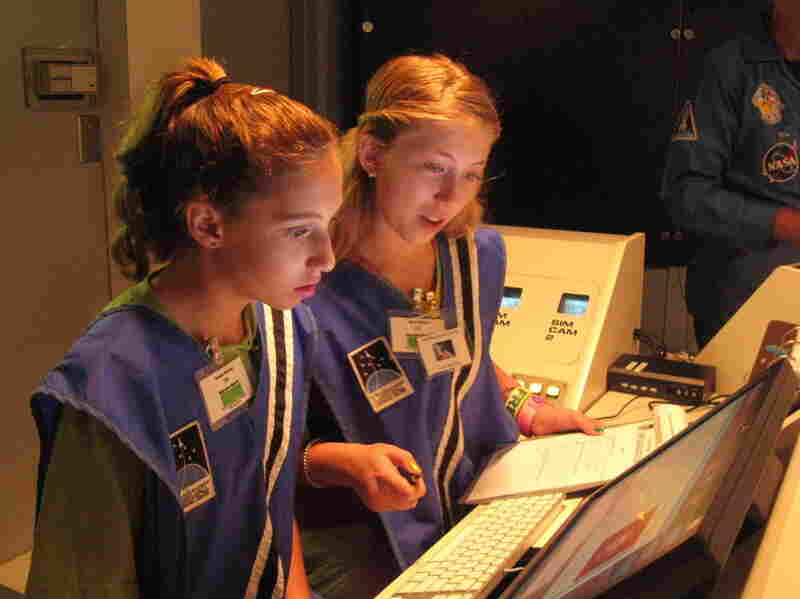 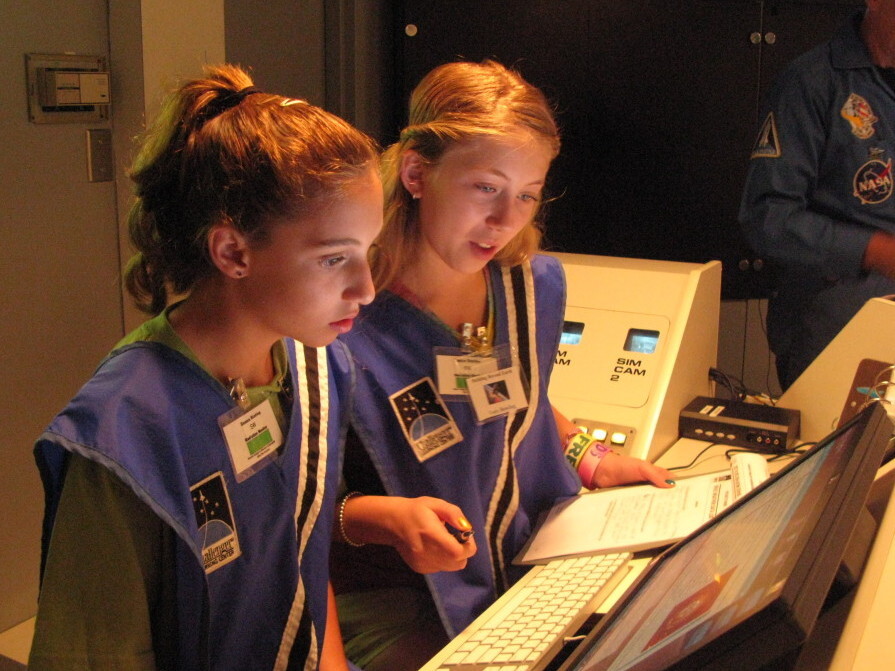 Seventh-graders Sophie Maloro (left) and Unity Bowling "fly" a mission to Mars, part of a summer program at the MathScience Innovation Center in Richmond, Va.

A child born today will never see an American space shuttle blast off from the Kennedy Space Center. The end of the shuttle program worries educators who say that human space flight is a great recruiter for future scientists and engineers.

There's nothing like a countdown for class participation. In Richmond, Va., 30 middle school students take a break from a summer science program to watch history: the TV broadcast of the final shuttle mission.

Playing along with the countdown is almost irresistible for these students. When the shuttle takes off, they all cheer.

Seventh-grader Unity Bowling says it's sad that she won't be able to ride a shuttle herself, but that won't dampen her interest in science.

These kids have more important things to worry about than the end of the space program; they're going to Mars. As part of their summer program, they split into two groups. One group enters a realistic-looking spacecraft. They talk to other kids who are at work in a make-believe control center on Mars, getting help so they can land the spaceship and take part in a multiyear Mars mission.

There's no denying that NASA is losing a very visible teaching tool.

"We are going to die from nostalgia when the shuttle era ends," says Barbara Morgan, the only true teacher whom NASA has sent into space.

Bringing Space To The Classroom

Morgan was the backup astronaut to Christa McAuliffe, who was supposed to be the first "teacher in space." McAuliffe died in the Challenger explosion, and that nearly ended the goal of sending teachers into space. Morgan had to leave her teaching job and fly as a mission specialist, and that didn't happen until 2007. During that ride, she talked to school kids on Earth. These days she teaches at Boise State University, and helps encourage students to study science, technology and math.

Now, there are three mission specialists who are trained like other astronauts, but will also do education-related work from the space station. The next educator astronaut isn't scheduled to go up until May 2012, on a Russian Soyuz rocket.

Science teachers here on Earth are much more focused on programs like EarthKAM, which lets middle-schoolers get access to a camera on the space station. Dave Curry, who teaches at Holland Middle School outside Philadelphia, uses the camera to give his students a chance to do science from the International Space Station.

"They plan for that picture, and they know exactly when it's going to be taken," Curry says. The camera generates a lot of excitement among his students. They're so enthusiastic about studying space science that Curry used to stop class for kids to watch anytime a shuttle was about to launch.

Post-shuttle, NASA is hoping students will keep their eyes skyward, watching the space station and other cool gadgets that will be launched later this year, like the unmanned Juno mission to orbit Jupiter, and the GRAIL mission to map the moon.

The next giant leap for getting actual teachers into space may come from the private sector. Steve Heck is one of seven people accepted into Teachers in Space, a nonprofit effort to send teachers on one of the private launch efforts currently in development.

"What it's going to do is take teachers on suborbital flights — some donated, some bought. You go, you take your experiment, then you go back to the classroom," he says. "I don't end up, let's say, working for XCOR [a private launch endeavor], I end up working for the Milford School District [in Ohio]."

Ironically, those suborbital flights will look more like the original Mercury missions and will take passengers only to the edge of space for just a few minutes. But if the program even gets close to its goal of sending 200 teachers aloft every year, lots of students will get face time with a teacher who has experienced weightlessness. Supporters of the idea hope that excitement will replace all the space-buzz the shuttle generated among students.