Accessibility links
Cutting-Edge Animation Created On A DIY Homestead Three young filmmakers are producing organic vegetables, goat milk and award-winning digital animation from an outpost they built for themselves in the hills of California. 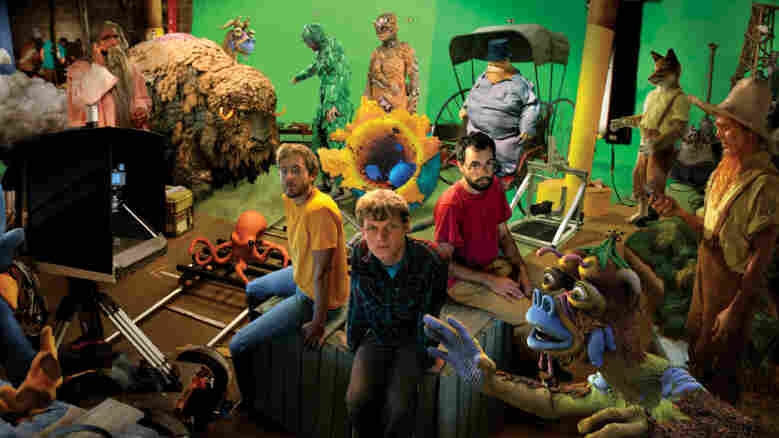 It's pretty common these days for young people to live with their parents after college, but few have managed to transform their old homestead quit like filmmaker Isaiah Saxon has.

With the help of filmmaking buddies Sean Hellfritsch and Daren Rabinovitch, Saxon has transformed 10 hilly acres surrounding his mother's house in Aptos, Calif. into Trout Gulch, a kind of rural hacker space where they build their own houses, grow organic vegetables, milk goats and produce state-of-the-art digital animation. 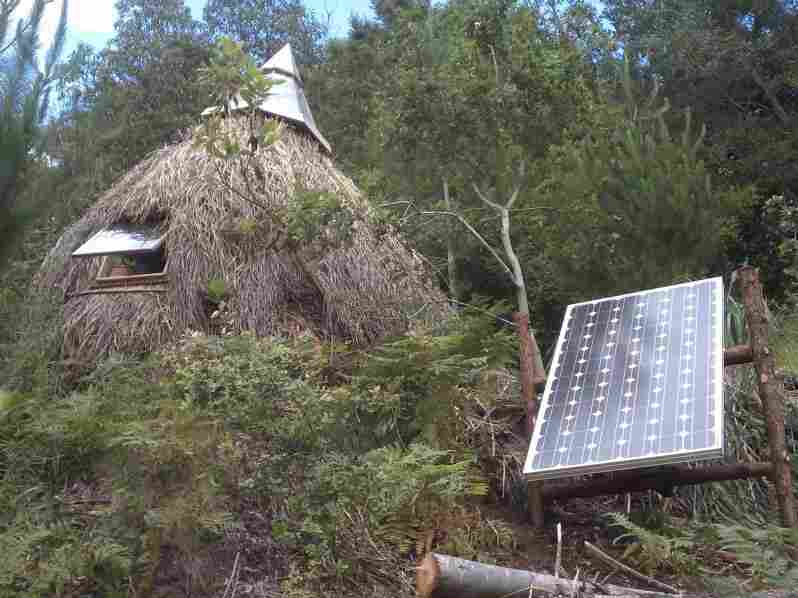 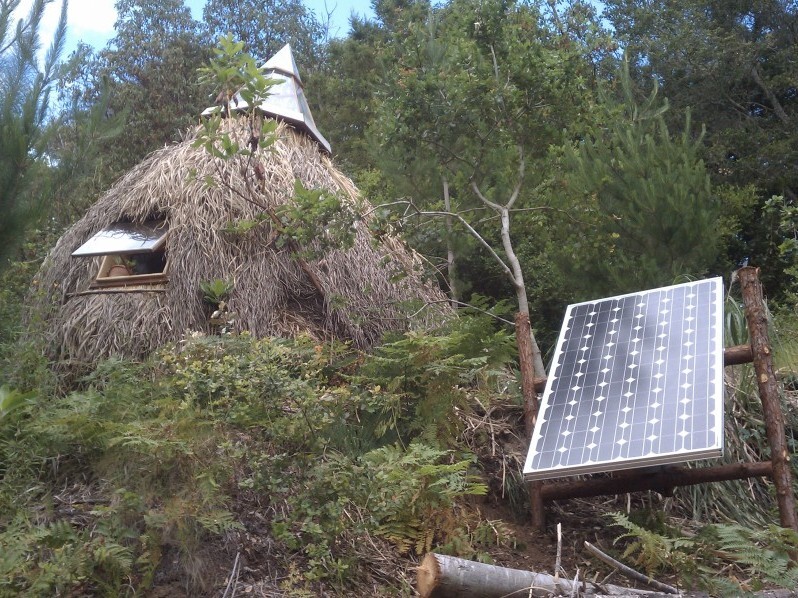 Saxon explains how his group of 21st-century pioneers takes a do-it-yourself approach to just about everything.

"We're building a 21st-century Hobbit village in which things are integrated into nature," Saxon says, "but we're harnessing cutting-edge technology and embracing the best of technology."

Saxon emphasizes a vision in which technology blends with nature — and "Hobbit village" isn't far off the mark. Rabinovitch, a tall 33-year-old, lives in a small grass hut with a door that's 4 feet tall.

"This is basically a sleeping chamber that is built to last about 10 years and then decay beautifully back into the land and become mulch," Rabinovitch says.

Outside his grass hut there's a solar panel that Rabinovitch installed to power some lights and his laptop. It's a reminder of how the bucolic and the space-age coexist at Trout Gulch.

Avoiding The Road To 'An Empty Existence'

They call themselves Encyclopedia Pictura and their work varies greatly. They've produced a commercial for the video game Spore; music videos for artists like Bjork and Grizzly Bear; and they're also working on a feature film about a group of kids who lead a DIY rebuilding effort after a flood hits their town.

They're in such high demand now that they can afford to hire a small army of computer graphics technicians at a film studio in Berkeley. But their office still consists of little more than three work tables with laptops on them.

"We're constantly being asked to do ads," Saxon says, adding that companies like Sprite, Jeep and Honda have all approached the studio.

But, according to Saxon, Encyclopedia Pictura only does advertisements for products they actually use.

"We could certainly be maximizing our potential to make money right now," he says, "but that would hinder and slow down the development of this neighborhood that we're building and would take us on a road to possibly an empty existence."

The Power To Build Everything Around You

For Saxon and the other homesteaders, a meaningful existence is one committed to sustainable architecture and agriculture. They use composting toilets, take turns milking the goats and the big money they earn from commercial animation projects allows them to spend long periods of time developing infrastructure at Trout Gulch.

Meals are cooked in a homemade, igloo-shaped oven situated just a few paces from the garden. A commercial freezer discarded by a neighbor was hacked to serve as a very efficient refrigerator, thanks to information from an online community of home beer brewers.

"I probably spend at least 50 percent of my time on the Internet reading forums — and not just for fun, like, trying to solve problems," community co-founder Sean Hellfritsch says. "So being able to hop on a forum and connect with someone...is really key."

They've had hands-on help from friends living in the Bay Area — mostly people in their 20s and 30s who volunteer for work crews and feel that they're a part of the place — as well as a number of prominent figures in the DIY movement, including Tim Anderson, a man they refer to as a DIY superhero. 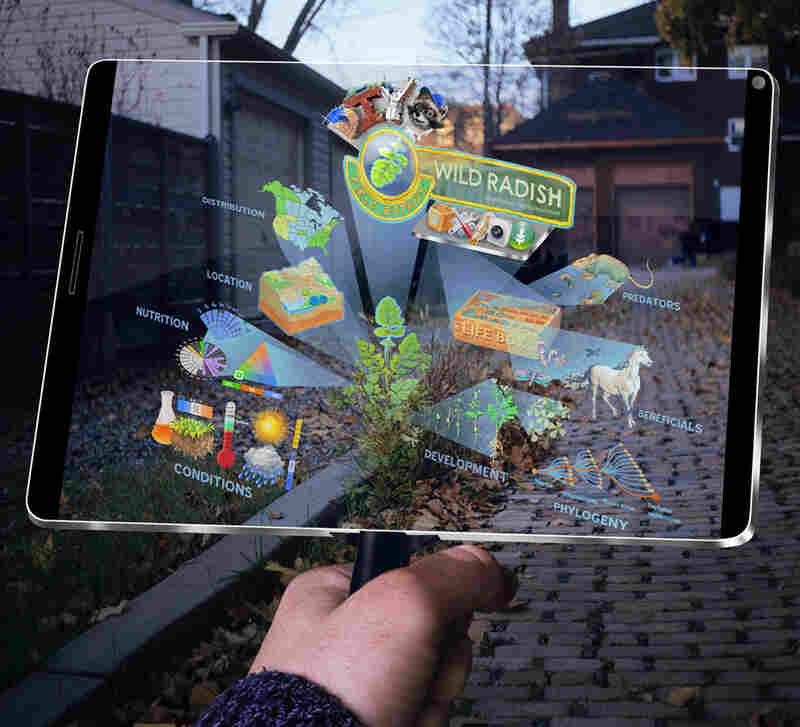 Augmented reality allows a user to identify an object from the real world — in this case, a plant — and digitally interact with it. Courtesy of Encyclopedia Pictura hide caption 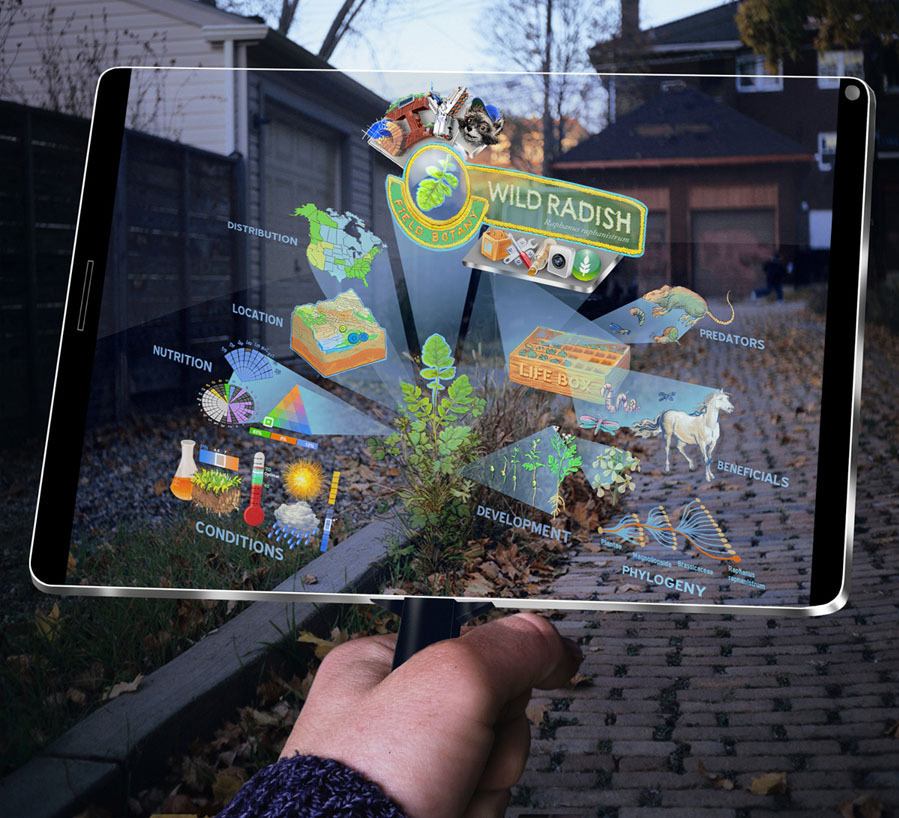 Augmented reality allows a user to identify an object from the real world — in this case, a plant — and digitally interact with it.

"We're providing an opportunity for people to gain land-based experiences and do things on a larger scale than you could ever do inside a city with all of the legal and physical space constraints," Saxon says. "I think people are excited by the freedom of this place and the amazing sense of empowerment you get from being able to build everything around you."

The Making Of 'Magic'

The idea of building everything around you is one that the filmmakers at Trout Gulch are also exploring in a new entertainment and education medium. It's called augmented reality and it allows for the real-time view of a surrounding environment to become digitally manipulable and interactive with programmed content.

In other words, it's like walking through a video game that's taking place in the real world.

"What you have is essentially magic," Saxon says. But, he adds, augmented reality can be used for a lot more than just games.

"We see this as the big, new, creative medium for the 21st century," Saxon explains. He says he hopes that Encyclopedia Pictura will lead the way in designing content for such systems. "We love to think of ourselves as trying to be the Walt Disney of augmented reality."

But in the meantime, the filmmakers at Trout Gulch continue to milk their goats and expand their sustainable village, while riding the cutting edge of digital design.