Accessibility links
Guts, Goals And Luck Will Win The World Cup The United States plays in the finals of the women's World Cup soccer championship against Japan Sunday afternoon. As thrilling as the ride has been so far, the women on the team know that a great journey needs a great ending. 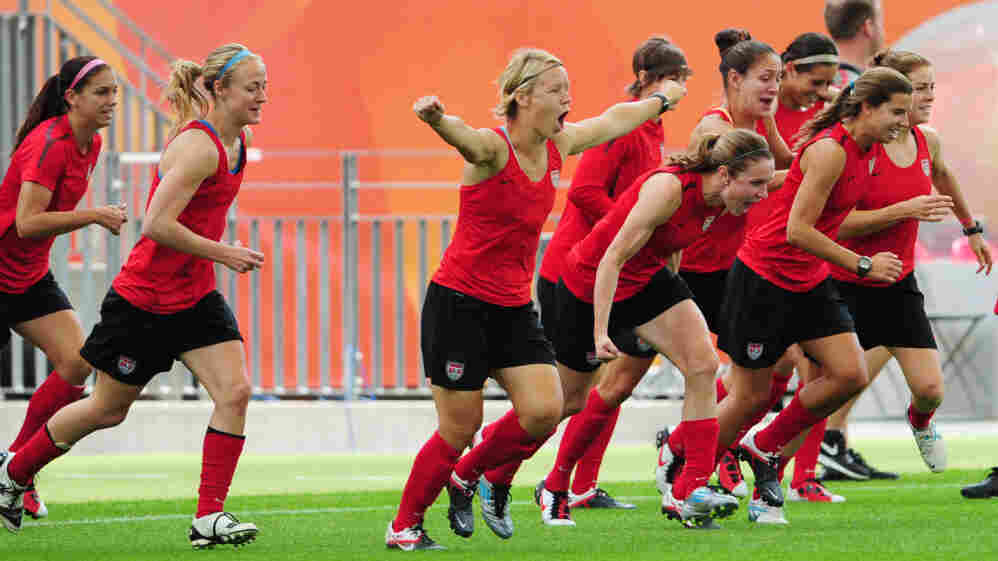 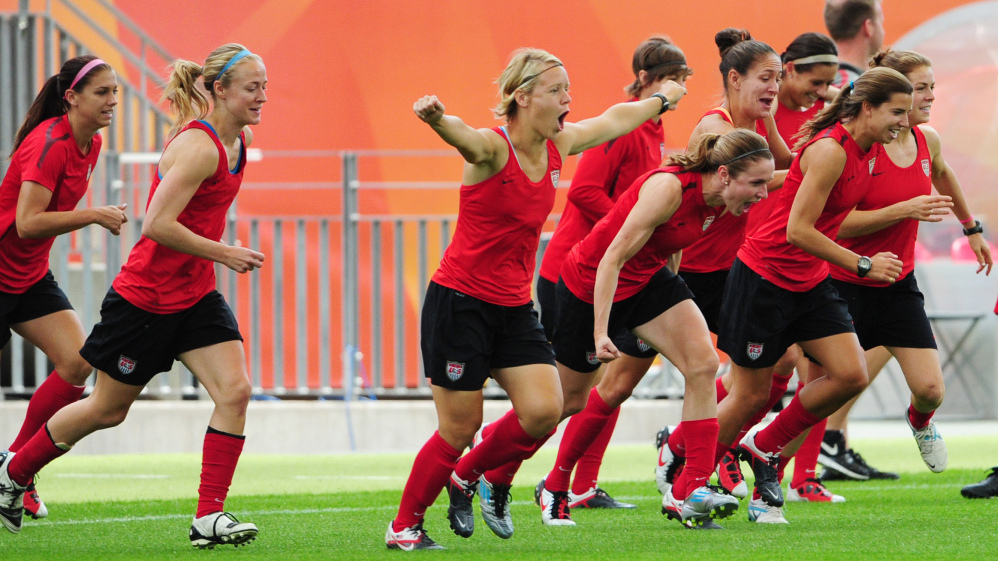 Team USA warms up a day before the championship game.

The United States plays in the finals of the women's World Cup soccer championship against Japan Sunday afternoon. As thrilling as the ride has been so far, the women on the team know that a great journey needs a great ending.

A short while before the World Cup tournament began, U.S. striker Abby Wambach was asked what it takes to win the World Cup. The 5'11 striker with more than 150 goals in international competition listed what the team will need.

Lets take them one by one.

Guts. How else can you describe the USA's quarterfinals victory against Brazil? The Americans were down to ten players after being assessed a tough red card. They were down a goal after a questionable penalty re-kick was awarded to the Brazilians. They were down to a minute of two left in play.

But they were never down on themselves, and indeed, Wambach scored a goal in the 122th minute, the latest goal in World Cup history. The top scorer in international competition is traditionally awarded the "Golden Boot." Wambach is making a bid to pioneer a golden head trophy.

On Our Two-Way Blog

Join Us At 2:45 p.m. ET As We Live Blog The World Cup Championship

Ah, the shifty-eyed cousin of the amazing comeback. The reason that the U.S. ride has been so thrilling is, to be frank, that the team has gotten lucky. Over their last three games, the U.S. has actually lost in a non-elimination game, staged that amazing comeback against the Brazilians, and let France score an equalizing goal in the second half. Bluntly, the U.S. has shown its vulnerabilities. The team knows it can't leave the finals to chance.

"We've been coming out a little slow in the second half, which we'll have to fix for the finals," says Christi Rampone, the only member of the current team to have played on the 1999 squad, the last to win a World Cup.

Though the U.S. can score, they've not been the offensive pinball machine they were in the early years of the World Cup. No team is ever going to equal the 25 goals the USA scored during the inaugural World Cup unless the number of games increases. But in this competition, the Americans have netted only 10 goals. The Japanese have scored only 9. In the finals, the U.S. should own the air — Wambach will face no defender taller than 5' 7".

The United States defense was their biggest concern coming into the tournament, but they've played well during competition. Anchored by Hope Solo, arguably the best goal keeper in the world, the Stars and Stripes will well remember their 2-0 defeat of the Japanese in a World Cup tune-up game. In fact, The Americans and Japanese have faced each other 25 times in international play, with the U.S. winning 22 games, and the teams drawing three times.

The team's skill extends beyond soccer ability; their real skill has been of the mental variety. They embrace their role as champions of a sport, and champions for a gender, constantly fielding variations on the question, "What does your success mean for soccer — and specifically for girls' soccer?"

Members of the Green Bay Packers or Miami Heat don't have to answer queries of that type. To their credit, the U.S. women never fall back on the pre-programmed athlete-ese of saying, "We can't worry about that," or, "We're just focused on winning." A big reason for team's mindset is coach Pia Sundhage, who knows how keep all the pressures and directives in harmony.

Every coach tries to keep a team's emotions in check, but sharply insisting "Calm down, dammit!" isn't going to soothe nerves. Sundhage, instead, has been known to break into song and dance. Any coach can tell a team to slow down, but in a recent press conference, Sundhagen launched into Simon and Garfunkel's "59th Street Bridge Song," sweetly drawing out the chorus of "Feeeeeeelin' Groovy."

The team seems respond to such tactics, and Sundhage is one of the few coaches who fields calls of "Encore!" at her press conferences.

Team USA will be quite happy if the finals is one of the few aspects of this World Cup that goes according to form. They are the favorites against the Japanese, perhaps not because they are technically better, or more proficient ball handlers, but because of the ineffable qualities of mindset and desire.

Every team on the verge of a championship is said to possess these traits, but few have made that case as strongly as the current vintage of Team USA.