Accessibility links
John Adams: Nixon, Minimalism And Mao When American composer John Adams was getting ready to write his opera Nixon in China, he warmed up his imagination with the image of Chairman Mao dancing a foxtrot. It became a seminal example of American minimalism, called The Chairman Dances.

Chinese President Mao Zedong shake hands with Richard Nixon after their meeting in Beijing, China in 1972. 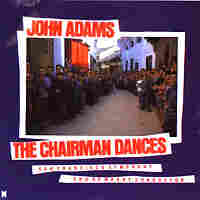 Since the early 1990s, John Adams has been America's most frequently performed living composer.

His music incorporates elements of minimalism, with a fondness for propulsive, motoric pulses. But he's also open to the standard Western classical tradition: He's never really turned his back on the musical past. As Adams himself likes to say, he's "raided the trash can of music history."

A good example is The Chairman Dances, which Adams wrote in 1985 as a kind of "study" for his opera Nixon in China. The idea here is that a foxtrot is being danced, but there's more than just the dance-like quality of the music that we hear; there's also a very strong allusion to the swooning romanticism of Hollywood in this music. It's a depiction of Chairman Mao dancing with his wife Chiang Ch'ing, who was a film star when they were young, so the emotional nuances of the music bring out the different characters.

I find it very rich that Adams can pull all of these elements all together, and that you can hear this wonderful, exuberant and lush melody come out of the texture. It shows his ability to bring disparate pieces together in a way that really says something.