Accessibility links
Van Cliburn's Classic Tchaikovsky Hear the lanky Texan's iconic 1958 recording of Tchaikovsky's Piano Concerto No. 1, made on the heels of his historic victory at the very first International Tchaikovsky Competition in Moscow. 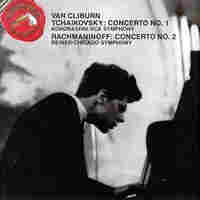 The Thirteenth Van Cliburn International Piano Competition is underway in Fort Worth, Texas (check npr.org/music on Monday, June 8 to hear the winners). To mark the occasion, Ted Libbey (with radio host Bonnie Grice) recommends Cliburn's own brilliant recording of Tchaikovsky's Piano Concerto No. 1.

Although hypersensitive by nature, Tchaikovsky was nonetheless an astute judge of his own work. He was understandably shaken when in 1875 he brought the manuscript of his First Piano Concerto to his colleague, the pianist Nikolai Rubinstein, who pronounced it unperformable and in need of wholesale revision.

Yet Tchaikovsky refused to alter a single note — and no decision ever proved more sensible. From the day of its premiere (which curiously enough did not take place in Russia but in Boston), the Concerto in B flat minor has become the standard against which all virtuosos must measure themselves. The grand flourishes of its opening, the gossamer passagework of its Andantino, and the pyrotechnics of its finale are to pianists what Everest is to the mountain climber.

With this 1958 recording made in Carnegie Hall, just weeks after he had won the first International Tchaikovsky Competition in Moscow, Van Cliburn established himself overnight as one of the great interpreters of the piece.

The account is played from the heart, with a spellbinding virtuosity that seems almost effortless — a reminder that the concerto is genuine music, after all, not some merely flashy showpiece of fast octaves. Cliburn's playing has so much poise, and in the lyrical moments he brings such shape and expressiveness to the phrasing of the music. Also, the beautiful voicing of chords in the opening passage is achieved with such naturalness, and with a complete lack of bombast; it's no mere technical exercise for him, this is music that really means something.

Conductor Kiril Kondrashin draws committed playing from the RCA Symphony, and while the recording shows its age, it also conveys every nuance of a thrilling occasion.