Accessibility links
The Politics Behind New Voter ID Laws Seven states have enacted laws this year requiring voters to show photo ID at the polls. Will the new rules stem voter fraud — or just keep minorities, students and the poor from casting their ballots?

Voters going to the polls next year — and even some this year — will encounter a lot of new rules. Photo ID requirements and fewer options for early voting are among the biggest changes. 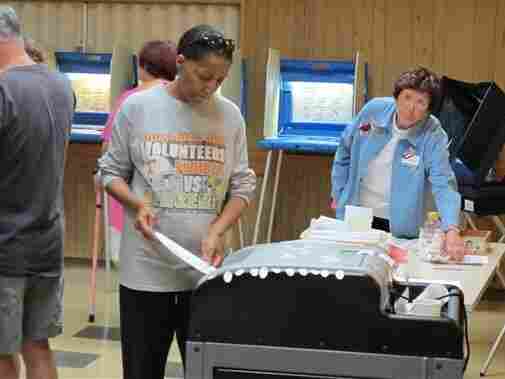 A voter casts a ballot in a Democratic primary on July 12 in Wisconsin, one of seven states to enact voter ID laws this year. Dinesh Ramde/AP hide caption

They're part of a wave of new laws enacted by Republican-controlled legislatures this year. Supporters say the rules are needed to ensure honest elections.

But Democrats say it's part of a concerted GOP campaign to suppress the vote. They say minorities, students, the poor and disabled — those most likely to vote Democratic — will be hurt the most.

Seven states so far this year have enacted new laws requiring voters to show photo ID at the polls. Ohio and Pennsylvania are considering similar requirements, and several other states already have them on the books.

Other states have placed restrictions on voter registration drives, imposed new requirements for voters to show proof of citizenship, or reduced the amount of time for early voting.

"This is about putting up obstacles to legal voters being able to exercise the franchise," says Scot Ross, executive director of One Wisconsin Now, an advocacy group that opposes the changes. "That is the scheme that the Republicans have concocted on this."

Ross says tens of thousands of Wisconsin voters lack the photo ID that will now be required in that state. He says many of them will also have difficulty traveling to motor vehicle offices to get free ID cards available under the law.

Other Resources On Voter ID Laws

The National Conference of State Legislatures has more information on changes to voting laws this year. The Brennan Center for Justice at New York University Law School, which opposes many of the changes, also has a detailed list.

All this, he adds, was created to solve a problem that doesn't exist.

"The bottom line is, in Wisconsin, there is no evidence of widespread voter impropriety happening at any point in time," Ross says.

But supporters say, in effect, that's beside the point and that the changes won't hurt legitimate voters. They argue that any voter fraud — even the possibility of fraud — is a concern.

"Whether it's one case, a hundred cases or a hundred-thousand cases, making sure we have legislation that protects the integrity for an open, fair and honest election in every single case is important," said Wisconsin's Republican governor, Scott Walker, when he signed the new law this spring.

And Republicans appear to be winning over public opinion. Polls shows that an overwhelming majority of voters back ID requirements.

In Tennessee, the Republican secretary of state, Tre Hargett, is preparing plans and public service announcements to make sure voters in his state adjust smoothly to the new rules. They'll be required to show photo ID at the polls and to provide proof of citizenship when they register to vote.

I think that nothing could disenfranchise an eligible voter more than finding out that ineligible voters are voting.

"I think that nothing could disenfranchise an eligible voter more than finding out that ineligible voters are voting," he says.

Hargett cited a 2005 special election in Memphis, in which poll workers admitted to faking at least three votes. But opponents of the new restrictions say a photo ID requirement won't stop that kind of fraud.

Doug Chapin, an election expert with the Humphrey School of Public Affairs at the University of Minnesota, says one problem with the current debate is that there's little data to back up either side.

Chapin says there's not only no evidence of widespread fraud, but "you really haven't seen, despite the rhetoric to the contrary, a whole lot of evidence that there are large numbers of people who are registered to vote, or want to register to vote, and don't have the kind of ID that would be required."

That's one reason Democrats and voting rights activists will be on high alert over the coming year, as they try to gather examples of harmed voters for potential legal challenges to many of the new state laws.

One civil rights group, the Advancement Project, has already filed suit against a voter ID initiative in Missouri. The ACLU is fighting new voter restrictions in Florida, and there's likely much more to come.