Accessibility links
Street Crime Vs. Corporate Crime: Equally Judged? In her weekly "Can I Just Tell You" commentary, host Michel Martin discusses popular reactions to crimes on the street versus corporate crimes, such as the 1980s Central Park wilding case versus the recent News Corps phone hacking scandal. Martin says a justice system worthy of its name gives fair treatment to the rich and powerful...and the poor and unpopular. 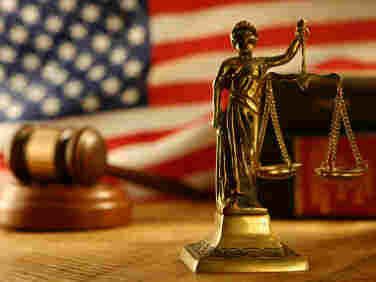 You might have been following the growing scandal in Britain over sleazy techniques allegedly used by some tabloid journalists to get information on people. Apparently, no one was spared.

The journalists — and I use that term reluctantly — worked for outlets owned by Rupert Murdoch, who also owns Fox News. They allegedly paid off police and tricked their way into people's voice mail and other accounts. They targeted celebrities, a murder victim and families of soldiers killed in conflicts overseas.

Ten people have been arrested so far, including top former News Corps executive Rebekah Brooks, who was or is a close confidant of Britain's Prime Minister David Cameron.

Partly because of the Fox News connection, there are questions about whether similar conduct took place in the U.S., and about Rupert Murdoch. What did he know? And if he did, when did he know it?

Murdoch is as much a friend to right-leaning politicians in this country as he is in the UK. So one can understand why someone he has supported — like former New York Mayor Rudy Giuliani whom Murdoch endorsed for mayor in 1993 and was a guest at his 2003 wedding — was quick to jump to Murdoch's defense.

At a meeting with voters in New Hampshire last week, where Giuliani was testing the waters for another presidential bid, Giuliani said he didn't believe his friend could have had anything to do with the scandal. "Give people the presumption of innocence," he said.

Can I Just Tell You? I am all for that program. Too bad the Mr. Giuliani didn't offer that same consideration to Patrick Dorismond, the unarmed man who was shot to death by an undercover New York City police officer. It happened when that officer asked Dorimond where he could buy drugs, and Mr. Dorismond told them to get lost. Dorismond was a security guard and father of two.

What he did was release Mr. Dorismond's sealed juvenile record for what he said was the purpose of showing that the young man was not an altar boy.

But Mr. Dorismond had gone to the same Catholic high school as the mayor — where, according to one account, he was an altar boy.

That probably factored into the city's decision to pay his family more than $2 million to settle the wrongful death lawsuit that followed.

The seemingly crumbling prosecution of international banker Dominique Strauss Kahn is being used as an object lesson on the presumption of innocence.

A better example might be the one told in the new book The Central Park Five by writer and filmmaker Sarah Burns. Burns recounts the horrifying story of five black and Latino teenagers who were wrongly convicted in connection with one of New York's most gruesome and terrifying crimes of the late 1980s — the so-called Central Park wilding case.

A young woman was viciously beaten, raped and left for dead when she went for an evening jog in Central Park. Within days, five teenagers were arrested, interrogated for hours without their parents, and tried as adults. They were quickly convicted, even though there was no DNA evidence, and no eye-witness accounts tied them to the crime.

They served their complete sentences of more than 10 years each before another man confessed to committing the crime and his role was corroborated. That's half a century of lives wasted.

It is easy to see why we react the way we do to different crimes. Street crime is so much easier to understand on a visceral level than corporate crime. The people who commit street crime often do not look like us, act like us or wear nice clothes. They don't have political favors to hand out.

But it is worth remembering that the measure of a justice system worthy of its name is not just whether a man with one of the world's biggest megaphones is treated fairly...but how that system treats those with no voice at all.