Accessibility links
Imam Arrests Show Shift In Muslim Outreach Effort The arrests of two imams in Florida by the FBI didn't spark outrage or demonstrations from the local Muslim community. Instead, the way the arrests were handled is being lauded as a model for how law enforcement and communities should work together.

In the second part of a series on counterterrorism training, NPR looks at a test case in Miami.

To understand the events that unfolded two months ago in Miami, you need to know that one of the most volatile things that can happen in a Muslim-American community is the arrest of a religious leader, the imam. Back in May, the FBI's Miami field office ended up arresting two of them: Imam Hafiz Khan and his son, Izhar Khan. They were charged along with several other members of the Khan family with financing terrorism in Pakistan.

The leader of this Miami Mosque, shown May 14, has been accused of financing terrorism in Pakistan. He has pleaded not guilty. Joe Raedle/Getty Images hide caption 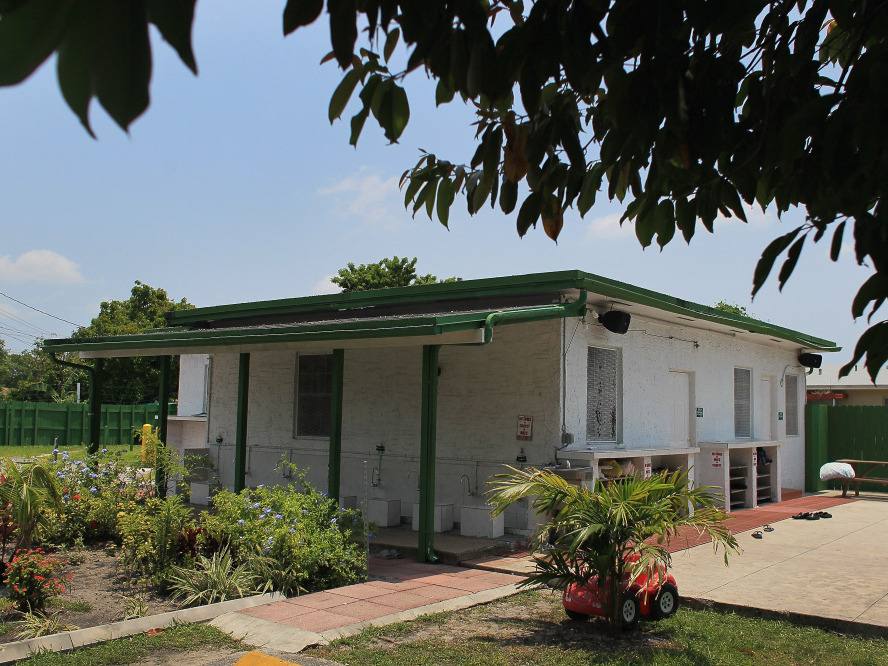 The leader of this Miami Mosque, shown May 14, has been accused of financing terrorism in Pakistan. He has pleaded not guilty.

Hafiz Khan is the leader of the Miami Mosque in west Miami — the oldest mosque in South Florida. His son runs the Masjid Jamaat al-Mumineen Mosque in Margate, Fla., just outside Miami. What makes these particular arrests unusual is the way the local Muslim community reacted to them: The arrests didn't spark outrage or demonstrations. Instead, the way they were handled is being lauded as a model for the way law enforcement and communities should work together.

"Obviously there is a lot of operational planning that goes on before an arrest takes place," says John Gillies, the special agent in charge of the FBI's Miami field office. "We wanted to be sensitive to the fact that the imams would be conducting religious services a number of times each day. There was going to be no good day to conduct these arrests, but there would be days to be worse to do it, like Friday."

Friday prayers are generally the most heavily attended of the weekly prayers. So the FBI decided the best day to move in would be a Saturday — in the morning.

"At 6 o'clock in the morning, we have the first prayer of the morning, and it was a little before 6 o'clock, like five minutes before," says Sayeed Shamin Akhtar, standing outside the Miami Mosque. He was there the morning the elder Khan was arrested. "After the prayer started, then someone banged on the door like 'boom, boom, boom.' FBI-style of course, you can understand."

Akhtar was on his knees in the very first row of the prayer hall. "We were all sitting down and standing up and thinking of God and God was looking at us and we were just praying," he said.

While the people inside were praying, more than a dozen agents in their FBI windbreakers had surrounded the mosque. Local police had pitched in. They cordoned off a two-block area in the neighborhood. The Miami Mosque is an ordinary-looking, one-story stucco house in the middle of a quiet, residential neighborhood. Without knowing it was a mosque, one would drive right by it. That Saturday, once the prayers had finished, an agent and a translator approached the imam.

"[The agent] came into the masjid with his shoes off. And he went straight to the imam. He grabbed his hand, and he said, 'You're coming with me,' in Pashto," Akhtar said. (Khan's native language is Pashto.)

The people in the mosque that morning were stunned. "Like a bolt of lightning had happened," Akhtar said.

Gillies, the FBI agent in charge, had been standing outside, and he watched as officers put Khan into a squad car and drove away. Then he picked up his cellphone and started dialing up leaders in the community. One of the people he phoned was Mohammad Shakir, who works for the Office of Community Advocacy in Miami-Dade County.

"The FBI was decent enough that they called us before they called the press," Shakir said. "On the phone, he said, 'Look, this has taken place. I personally was there. I supervised it. I made sure that everything goes by the book. No violation. No rudeness. No discrimination. Not to violate the mosque sanctity.' So we immediately called a meeting and got together and developed a strategy how to respond."

This may all sound like common sense, but these kinds of arrests rarely happen this way. The Muslim community is usually left to sort through rumor and innuendo. It is caught flat-footed when the media call for comment. The worst-case scenarios are often embraced as fact, and it often takes weeks to sort fact from fiction.

In the Miami case, there was a lot of attention to detail. The FBI waited for the morning prayers to end. The agent took off his shoes before entering the mosque. The FBI didn't arrest or handcuff the imam inside the mosque. The leaders in the Muslim community were kept informed. In fact, they saw a copy of the indictment before the media did, and Gillies called them just minutes after the arrest.

As it turns out, many of the officers who were there at the Miami mosque that day had just finished — literally just a week before — a training course that focused on cultural sensitivity involving Arab, Muslim and Sikh American communities. One of the films they were shown was called "In the First Three to Five Seconds." It's a bit of a primer on Islamic culture. Among the things it mentions: "Shoes are removed before stepping on the prayer rug; avoid stepping on the prayer rug with your shoes ... "

The FBI's Gillies said he would have known to take off his shoes before the training. He has Muslim agents who have helped educate him and others in the Miami field office about cultural sensitivities. "I would like to think that we would have been respectful six months ago, 12 months ago," he said. "Five years ago, we might have gone into the mosque without taking our shoes off. I am speaking personally here."

Today, the Miami arrests are being held up as a model of how to handle these sensitive cases. Wifredo Ferrer, the U.S. attorney for the Southern District of Florida, says the way the arrests unfolded was no accident. He is one of two dozen U.S. attorneys across the country who have been asked to take part in a pilot program that has them reach out directly to local Muslim leaders. The relationship, in some respects, is a natural one. Muslim communities that have been victims of hate crimes would go to the U.S. Attorney's Office or the Department of Justice's Civil Rights Division for relief.

"The reason I think they got the U.S. attorneys involved is because we can convene the agencies, the community members, in a fashion that we can bring everybody together to the table," Ferrer said.

The point isn't lost on Ferrer or the FBI's Gillies that by having done this outreach, when it came time to arrest the imams, they weren't in a position of having to open a phone book and figure out whom to contact in the community. They already had a relationship with leaders in the Muslim community. They had already attended prayers in some of their mosques. They'd had dinners to meet mosque members and U.S. Attorney's Office employees.

"The time to set up those kinds of relationships is before something bad happens," Gillies said. This kind of thing is starting to happen across the country, the Justice Department says. The Miami arrests have just been the most striking example.

That said, it has taken almost a decade to get to this point. Since the Sept. 11 attacks, Muslim leaders have criticized law enforcement tactics as heavy-handed. They've complained about the FBI planting undercover agents and confidential informants inside mosques. The FBI won't apologize for those tactics but does acknowledge that it can do a better job of reaching out to the Muslim community. And it isn't lost on the bureau that being culturally sensitive can pay off in other ways.

"We have found that Muslim and Arab community members have been really helpful in informing us and disrupting plots against the United States," Ferrer said. "So it is really a win-win for both sides."

Two months after the arrests, the gestures made by the U.S. Attorney's Office and the FBI appear to have paid off. Even after a judge denied the two imams bail, there has been barely a ripple in the local Muslim community.

"No one knows all the facts yet — even the lawyers don't know all the facts yet," Shakir said. "If he is innocent, fine, we have gone through another American process. We're still hoping when all is said and done, he will come out innocent."

Hafiz Khan and his son have entered their pleas: not guilty to all of the charges.