Sure, it's a somewhat breathless syllogism, but there is truth in it. 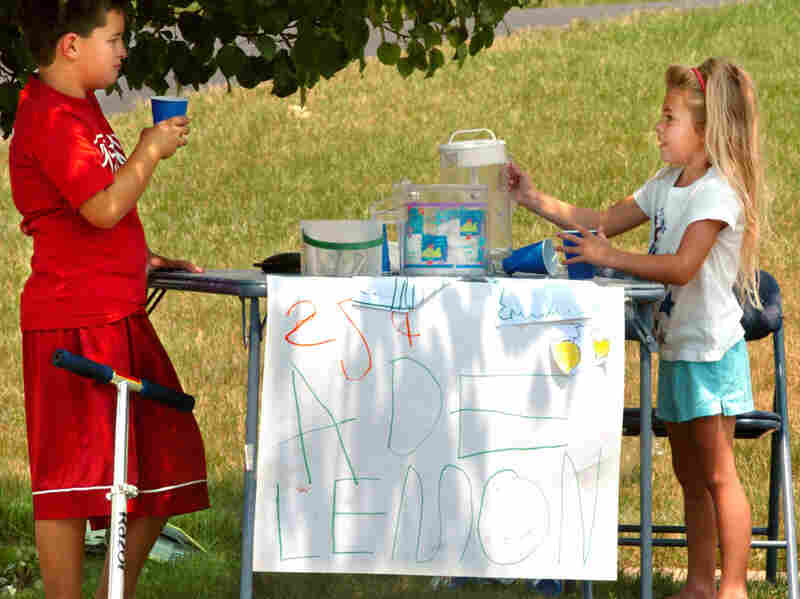 Matt Grozier, 8, and his neighbor, Alyssa Boyd, 5, at her lemonade stand near Lightstreet, Pa., in 2007. Bill Hughes/AP hide caption

Arguably there is no catchier, kitschier symbol of the American spirit than a lemonade stand. It represents not only a way of life, but a way of making a living. It is capitalism and leisure, refreshment and resourcefulness, enterprise and summer skies all squeezed together — stirred in with lemons and sugar and water — and sold by the glass for whatever the market will bear.

But if you are paying attention to the news, you know that lemonade stands are at risk.

Just this year, The Associated Press reports: In July, police shut down a lemonade-making operation in Midway, Ga., because law enforcement officials were not sure how the lemonade was being made. In April, a 13-year-old lemonade purveyor was robbed of $130 by dastardly customers in Warner-Robins, Ga., and, in July, kids in Strongsville, Ohio, said a handful of teenagers, including two boys sporting skinny jeans and blue hoodies, stole at least $13.50 from their lemonade stand.

During the U.S. Open in June, officials in Montgomery County, Md., fined kids $500 for running a fancy lemonade stand — that sold bottled lemonade and other drinks — near the golf tournament. Proceeds, the children said, were going to charity. County officials finally agreed to waive the fine and allow the kids to operate without a permit if they would move the 10-by-10-foot tent down the road a piece.

As one of the mothers of the children told WUSA news: "The message to kids is, there's no American dream."

For others, the dream stands tall. In suburban Detroit, students at Beverly Elementary School are planning to string together — side by side — enough 4-foot-wide structures to create the World's Longest Lemonade Stand on Aug. 20. They hope to wind up in the Guinness World Records.

"The lemonade stand is often a child's first business venture," says Mary Ann Hupp, 41, a creative director at a marketing agency and one of the motherly promoters of the event. "We hope this project is an example for our children that they should be proactive and take initiative in life."

Hupp believes that the mere planning of the event has kindled the entrepreneurial spirit in the kids. "My 9-year-old son told me yesterday that he'd like to invent a flying car before college," she says. "While that will most likely not come to fruition, we love that he is dreaming big." 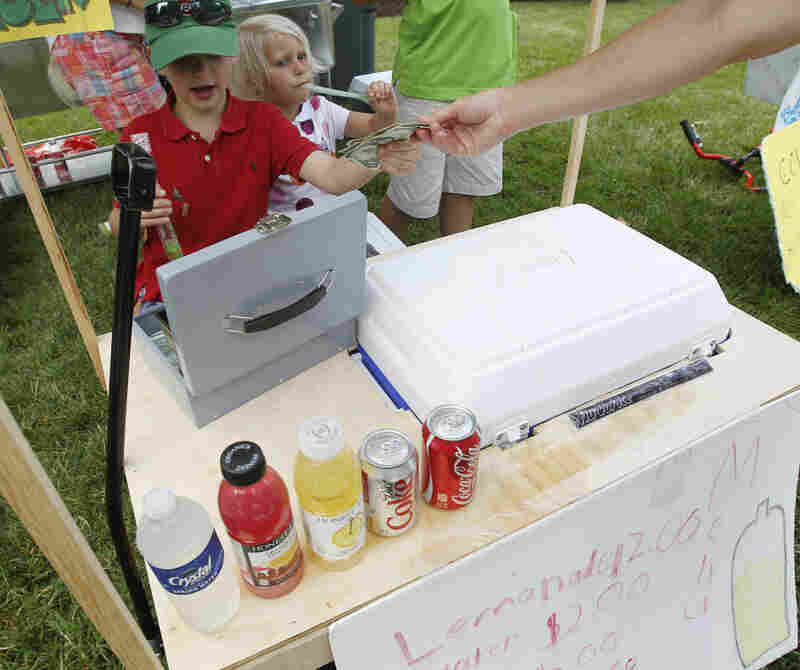 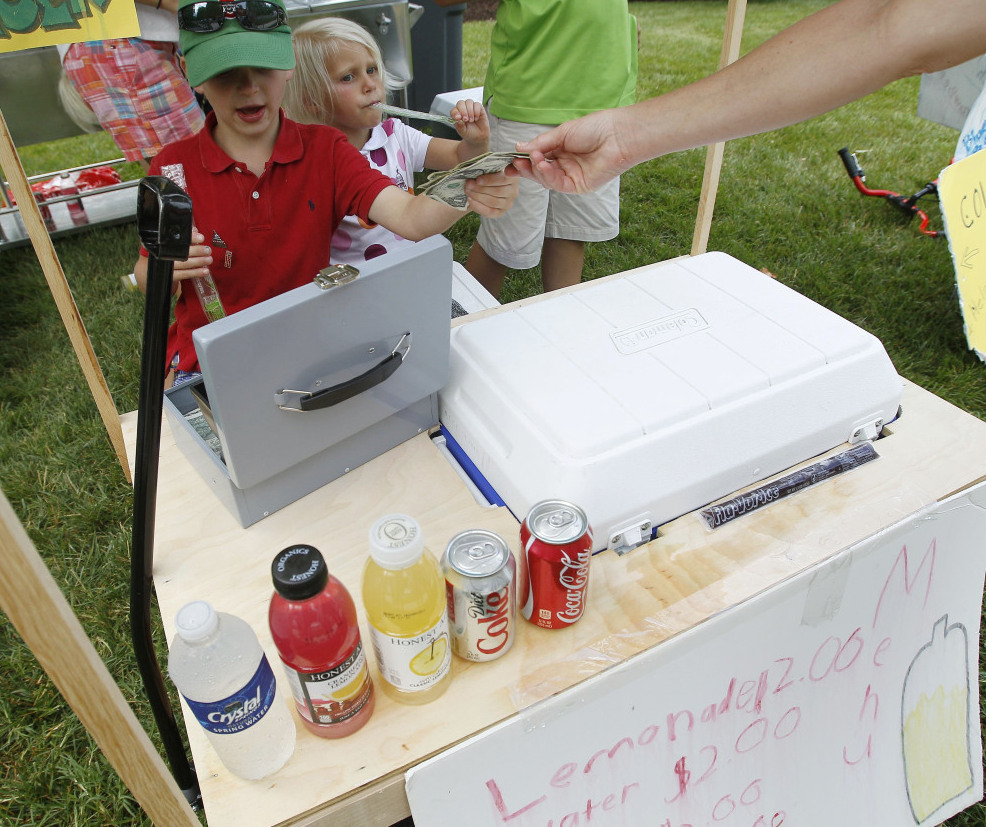 Young entrepreneurs collect money at their lemonade stand outside the site of the U.S. Open Championship golf tournament in June in Montgomery County, Md.

Setting up a lemonade stand, says entrepreneur Bill Rancic, "can teach kids so much about life in America. They learn about profits and loss, how to make change, advertise and work with others." As winner of the first season of the TV competition The Apprentice, Rancic gives motivational speeches about the importance of a solid work ethic.

Author of Beyond the Lemonade Stand: Starting Small to Make It Big, Rancic says, "my sisters and I had lemonade stands set up at the end of our court. We were one of the first houses built in our neighborhood, so there were a lot of construction workers working on the other houses and we would hit them up all day long."

Rancic and the Michigan kids follow a long line of lemonaders in this country. The American dream can be sweet. But it can also turn very sour.

For many New Worlders, their initial taste of America was bitter. Perhaps the first journalistic account of a lemonade stand in this country comes from a July 1867 report of what just-off-the-boat immigrants experienced when they arrived in Manhattan.

The Castle Garden in the Battery was teeming with vending carts and, according to the New York Tribune, "the crowning glory of these retail huckster-stands is the lemonade kept by them in dirty wooden or tin pails. This delicious beverage has three ingredients or component parts, namely: molasses, vinegar and water. A few decayed and repeatedly squeezed lemon rinds, intended to deceive the keen eye of the observer, float on top of the dirty looking fluid."

From the beginning, the Lemonade Stand As American Dream could be just a murky mirage — an emblem of all that should be good but isn't.

Over the decades, comedians played off the treacly symbol. In the Marx Brothers classic 1933 film Duck Soup, Harpo is selling peanuts from a cart next to Edgar Kennedy's lemonade stand. When Kennedy harasses Harpo, the Silent Marx rolls up his pants legs and sticks his feet in Kennedy's lemonade dispenser.

Three years later, the Our Gang kids starred in The Lucky Corner, a short film about setting up a lemonade stand. Competition leads to lowbrow high jinks. Starch is substituted for sugar. Lemonade is spit and spewed all over the place. The American dream turns into a donnybrook.

Lemonade stands pop up throughout American culture. They were everywhere on Shirley Temple's Good Ship Lollipop. A trio of kids in a 1955 Norman Rockwell illustration sold lemonade at a stand made from crates for 5 cents a glass. Opie sold his for 2 cents on The Andy Griffith Show in the early 1960s.

At some point along the way, the drink — and the dream — became more diluted: Some kids stopped squeezing fresh lemons and began using frozen concentrate, powdered or store-bought lemonade. They added artificial sweetener and bottled water and occasionally tinkered with other flavors.

Despite the changes, the lemonade stand continues to hang on as a go-to icon on America's cultural desktop. Sometimes with a twist.

This video of the Bryant Oden song has been viewed nearly 50 million times on YouTube.

It has starred in video games, short films and lots and lots of media. There's the animated version of Bryant Oden and Forrest Whaley's Duck Song -- based on an old joke about a duck walking up to a lemonade stand — that has been viewed nearly 50 million times on YouTube. There's the Verizon ad in which little Susie turns her front yard lemonade stand into a thriving corporation in less than 30 seconds. And there is the Mike's Hard Lemonade Stand ad campaign that touts "lemonade for grown-ups."

But in the face of anti-saccharine cynicism, the lemonade stand also continues to represent the irrepressibility of American idealism.

Alex's Lemonade Stand Foundation, for instance, has raised more than $45 million since 2004 to battle cancer in children. The foundation encourages people of all ages to set up lemonade stands to raise money for a good cause. It offers marketing materials and "stand coaches" to help hawkers maximize the experience.

And in Beverly Hills, Mich., near Detroit, the kids from Beverly Elementary School — and their parents — hope to use most of the money they raise to help offset proposed cutbacks. "Our school district is facing a $6.6 million deficit in the 2011-2012 budget," says Mary Ann Hupp. "This translates to a loss of $470 in per-pupil funding. Although there are some state incentives that will reduce that deficit, it will still be felt in the classroom."