Accessibility links
For Rebels, Gadhafi's Mines A Potent Obstacle On the eastern battlefront in Brega, mines have impeded a speedy rebel advance. In the west, an increasing number are being uncovered every day. Defusing the mines is perilous work and increasingly means digging them up by hand. 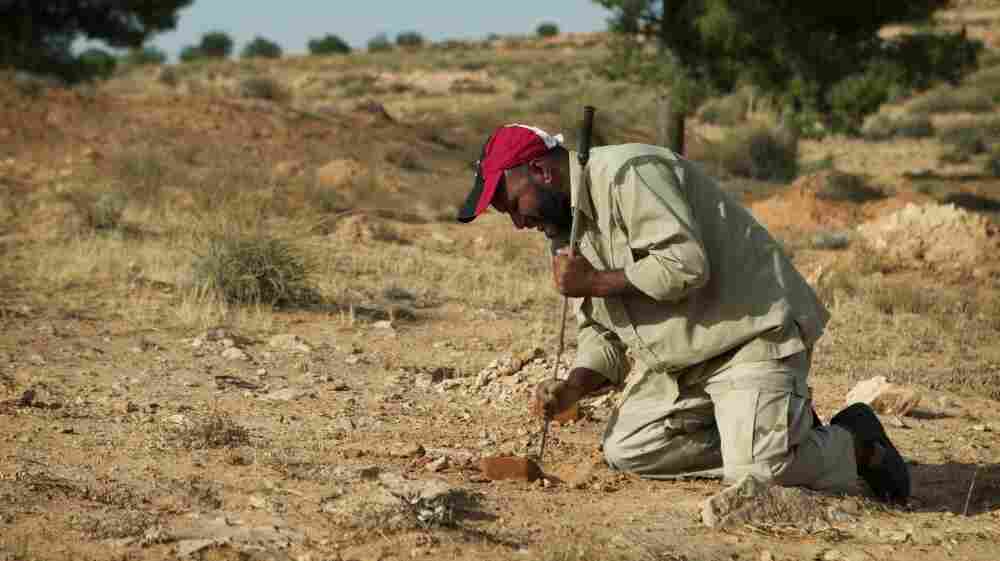 Land mines increasingly are being used by Moammar Gadhafi's forces on battlegrounds across Libya. Rebels fighting for the eastern town of Brega are being stymied by minefields around the area.

In Libya's western mountains, anti-tank and anti-personnel mines are causing many casualties, but there are few mine experts to help.

On the barren front line in the village of Gualish, rebels take cover from Gadhafi's forces — and the relentless sun — behind a sand berm.

Rajed, a rebel fighter at the front, points to the south of Gualish and says they have just discovered a new minefield. Rajed says all of this area is now mined; it's terrible, he says, and that is what is stopping their advance.

Rebel commanders say the use of mines are a sign that Gadhafi's forces are becoming more desperate and weak. 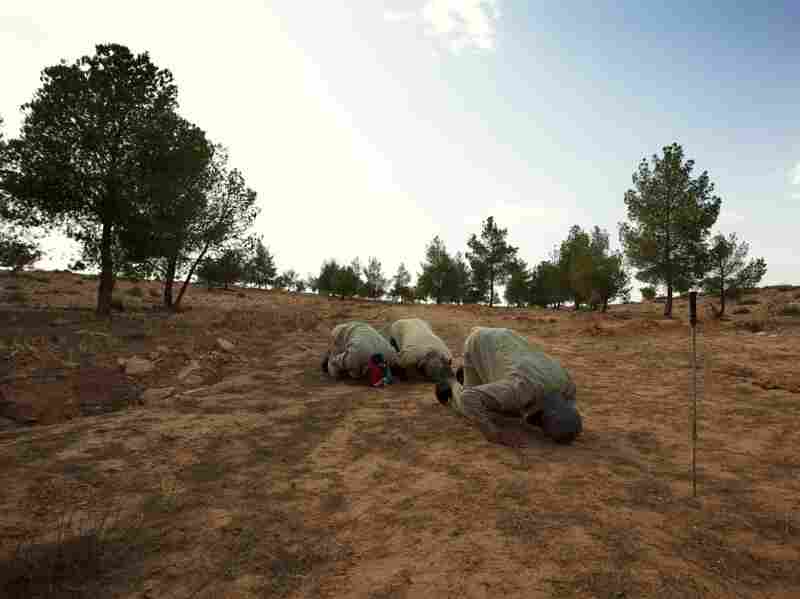 Milad Saadi and his team pray just before beginning their work clearing mines. Their mine probe is stuck in the ground in front of them. Jonathan Levinson for NPR hide caption 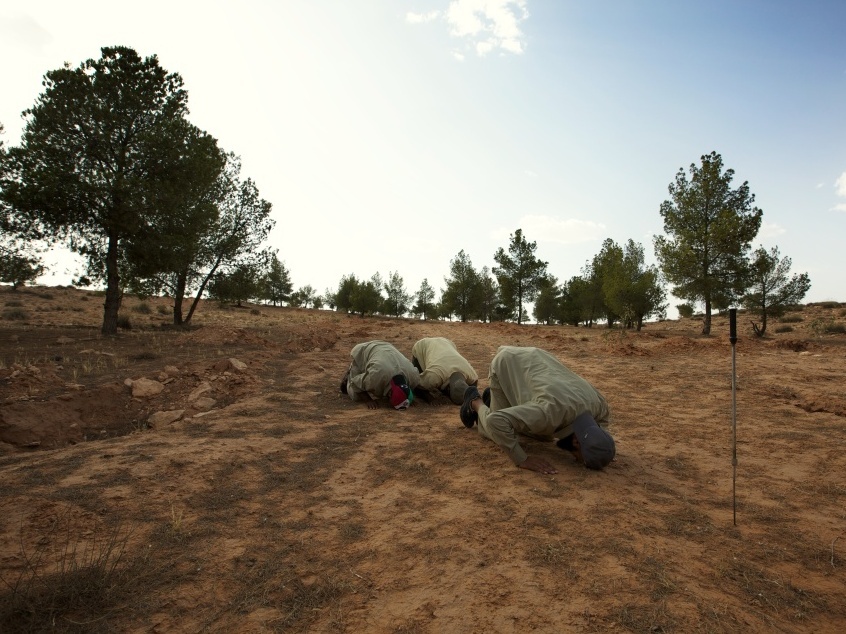 Milad Saadi and his team pray just before beginning their work clearing mines. Their mine probe is stuck in the ground in front of them.

The mines are effective, though. The fields have to be avoided or cleared before rebel forces can move through.

In the silence of a bucolic pine forest, a group of men kneel down to pray. They are the rebel de-mining team in the western city of Zintan. Even with the best equipment, finding and defusing mines is perilous work.

The equipment here, though, is minimal: two sticks and an old metal detector. But these men don't really even use that; they simply walk into the minefield and look for displaced earth.

When they spot a suspected mine, they kneel down and proceed to dig it up with their bare hands. The mines here are small and tan-colored. They are hard to spot unless you know what you are looking for, and there's an astounding number of them.

In one 10-minute interval, along a 75-foot-long stretch of road, the men here have found 30 to 40 mines. Some have plastic explosives packed on top — enough to disable a tank.

According to a recent report by Human Rights Watch, the mines are Brazilian-made T-AB-1 anti-personnel mines. They have a low metal content, making them difficult to detect. Gadhafi's forces have also laid anti-tank mines in the western mountains, the report says.

Milad Saadi, who heads the de-mining team, dealt with mines in Gadhafi's army before he defected to the rebels. He says he doesn't have enough people or equipment to deal with all of the mines.

The only way they are locating minefields these days, Saadi says, is when a rebel vehicle runs through them and someone gets hurt.

At a hospital, Dr. Omar Sulieman points to his patient, Farhad — only the latest mine victim to be treated there.

"He has fracture in the last metacarpal in the foot, and he has dislocation in the arm," Suleiman says. "It's serious; he must make operation today, maybe." 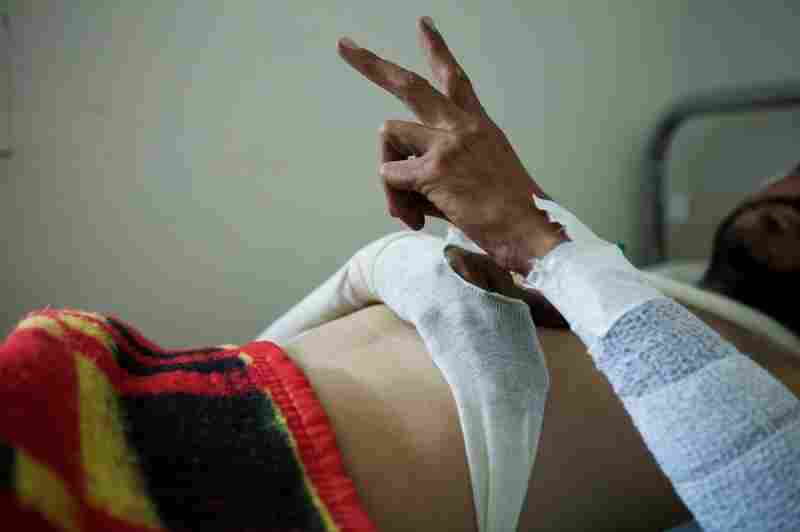 A mine victim at the hospital in the city of Jadu in the Nafusa Mountains. Jonathan Levinson for NPR hide caption

Farhad is lucky. He survived running over a mine outside Gualish. He says he doesn't remember anything after the explosion: It knocked him out cold.

Back in the minefield, the men have made a discovery.

De-miner Abdul Hakim holds two huge blocks of plastic explosives — about 16 pounds worth — in his hands. They were placed around one of the mines. If they had detonated, they would have caused serious damage.

His fear is that they won't find all of the mines and that, when this place is no longer a battle zone, civilians will get hurt.

Hakim says this is a place where farmers work and families come to picnic. Now this place is ruined, he says — no one can ever come here again.